On my full version Windows 8 laptop, I have recently run into an error.

As you can see, for some reason I have 2 library folders.

If I delete one, nothing happens for ~6 seconds, and then both of them are deleted.

If I edit the content of one, it edits the other.

If I hit restore default libraries, it remains the same!

If I try to make a new library and rename it to Music, it does what it is supposed to. However, a couple of seconds later, another Music folder pops up!

Also, for some reason, the Documents library is no longer there, and I can't seem to restore the original one in any way.

Does anyone know how to fix this?

P.S. The reason I want the original folders back is so I can use IconPackager to apply custom icons to them and their contents.

Somehow it thinks that one of the Music folders is the default Document folders since if I create a new library called "Documents" it does not become default. Also, if I delete one of the Music libraries, the other one gets deleted as well.

Could you post screenshots of what you have in the folder below, and of the properties pages for both Music libraries at this location? You could just copy and paste the path below in Run (Windows+R), and press Enter. 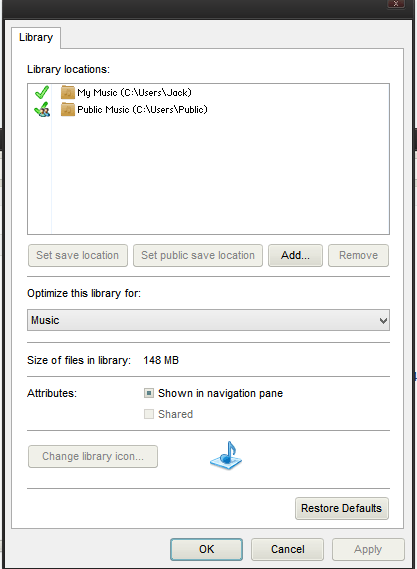 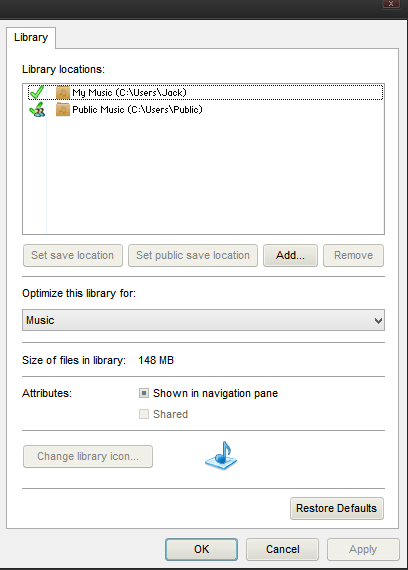 Are you able to delete one the Music libraries in this %AppData%\Microsoft\Windows\Libraries location without both of them being deleted?

If not, then try deleting both at this location, and then use the restore option again to see if that may work.

Brink said:
Are you able to delete one the Music libraries in this %AppData%\Microsoft\Windows\Libraries location without both of them being deleted?
Click to expand...


Brink said:
If not, then try deleting both at this location, and then use the restore option again to see if that may work.
Click to expand...

When I hit restore default libraries, both of the music libraries reappeared.

Also, I was messing around with Start8, and when I hit the Documents button on the Start8 Start Menu, it opened up the Music library folder, leading me to believe that somehow the Documents library has turned into a Music library!

Ok. If you like, let's give this a try to see if this can restore them for you.

EDIT: After editing the library to contain the correct folders, I was able to paste them into libraries. Documents pasted fine, but when I tried to paste the music library in, two music folders appeared! :O

EDIT2: After some tinkering with copying/pasting/restoring, I was able to delete the double music folders and paste yours in without it duplicating! Yay!

EDIT3: However, when I click Restore Default libraries, the duplicate music folders reappear. The good news is that your music library doesn't dissapear, so there are THREE music libraries in there, but I can just deleted the duplicates.

What happens when you try to paste them?

See the edits I got it to work! However, the computer doesn't consider Documents and Music as the "default libraries," which is weird, but I can live with it. Thanks!

Okayyy sooo:
Somehow one of the Music libraries which I copied to paste into the libraries folder came back from the dead and restored itself to my desktop? o_0

Also, this is what my library folder looks like now:

EDIT: There are now only 2 of the transluscent-ish folders. What are they?

Odd, the two transluscent folders turned into Pictures and Libraries (which I deleted since for some reason IconPackager didn't change their icons)
Last edited by a moderator: Nov 15, 2012

Which location is that?

I deleted the Pictures library and made a new one called Pics so I could use a custom icon, and deleted Videos because I never use videos.

Does it look and work fine now?

Yup, but they're just not recognized as default

The only other way I know to fix this good and proper is to refresh Windows 8.

The double music folders popped reappear every now and then and I have to manually delete them. :/ Know why?

Most likely something is either saving into it or trying to open it.

Would I lose all of my programs?

Yes. Any 3rd party installed programs will need to be reinstalled afterwards.

The blue NOTE box at the top of the tutorial can give you more details on what is affected.