Blurry text problem has not been fixed in Win 8.1 RTM

I can confirm that M$ did NOT fix the blurry text problem. This is absolutely UNACCEPTABLE for an OS to be released with a bug that was known long before RTM.

There could be legitimate reasons for this, though. The leaked version might not be the real RTM. It could also be a driver issue. Regardless, if this is in fact the real RTM, how could M$ release an unfinished product?

Its another nail in the coffin for Win 8/8.1 in my case. I hope it eventually gets fixed, but as it stands now M$ still has done nothing to sway me towards upgrading from Win 7.

For those who may be wondering, I'm running dual Nvidia 675m cards in SLI.

atiro said:
I had a similar problem after upgrading to 8.1. Chrome, system dialog boxes, etc looked blurry as if my graphics card was problematic. But a simple operation solved the problem.
You can just follow this link. A "tick" in a box and it's OK for me now. I hope, it works for others, too.

Atiro, thanks. I found this page on my own and was going to post it. Definitely fixed the issue for me!

Following post has a easy fix which worked for me. You can try it out too.

[Fix] How to Fix Windows 8.1 Fuzzy / Blurry text in Chrome

boruguru said:
Following post has a easy fix which worked for me. You can try it out too.

[Fix] How to Fix Windows 8.1 Fuzzy / Blurry text in Chrome
Click to expand...

boruguru, welcome to the Windows 8 forums. Yes, that is the same solution that has helped with me and others. Thanks for the post. While you are here, check out the tutorial section which has a lot of great stuff in it.

K, I have found the problem and the solution.

Win8.1 released version does NOT LIKE to have the text size changed. This applies to both the desktop and BROWSERS. For instance, going to the Display page and increasing the text size will cause burred text. So will going to a browser and using CNTL+ mouse wheel to enlarge the browser screen. The browser now becomes blurry (I verified this). The FIX is to check the box on the display section called "Let me choose One Scaling Level". That should fix both issues.

BTW, loading in a new graphics driver will RESET the resolution back to the default, "fixing" the problem. 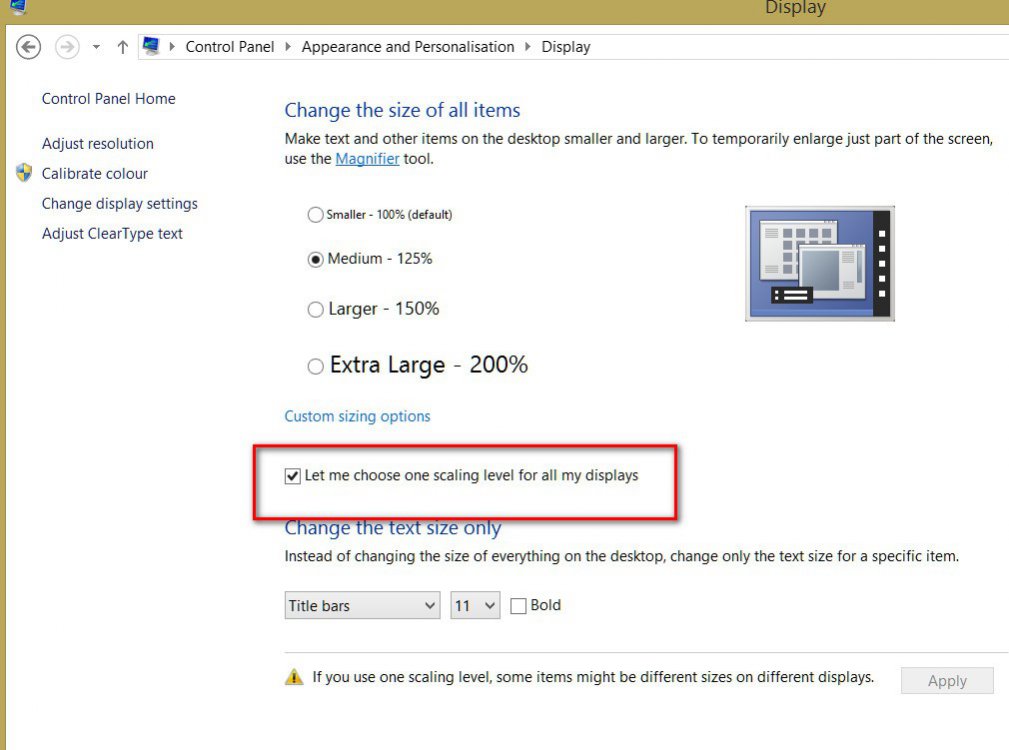