How to Determine Size and if you should Clean Up Component Store (WinSxS folder) in Windows 8.1​


Why is the WinSxS folder so big? The short answer to this commonly asked question is that the component store (WinSxS folder) contains all the components that make-up Windows to allow you operate your system. These components are kept to rollback any problematic change or to repair a file that becomes corrupted.

The WinSxS folder isn’t as large as it may appear at first glance because size calculations can include Windows binaries located elsewhere which makes the WinSxS folder seem larger than it really is.

For more information about the component store, see:


This tutorial will help show you how to determine the actual size of the component store (WinSxS folder) and if you should clean it up in Windows 8.1 and Windows Server 2012 R2.

2. In the elevated command prompt, copy and paste the command below, and press Enter. (see screenshot below) 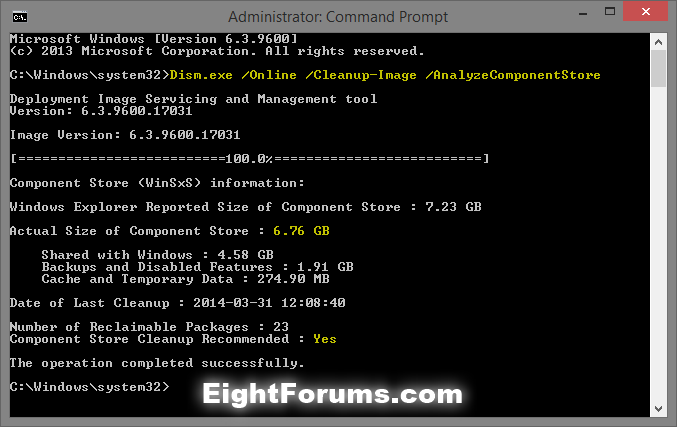 Note
The information returned is:

3. Based on the analysis above you can determine the overhead of the WinSxS folder by taking the sum of the backups and disabled features size with the cache and temporary data size.

5. If Component Store Cleanup Recommended says Yes, then you can follow the steps in the tutorial below if you like to cleanup and reduce the size of the component store (WinSxS folder) to free up hard disk space.

​
​
How to Clean Up the WinSxS Folder (Component Store) in Windows 8.1​

This option is not available in Windows 8. You would need to upgrade to Windows 8.1 first. If you like, the tutorial below can show you how to do so for free.

Thanks for the very helpful tutorials!

Any idea why windows would create many duplicate "oem#.inf" drivers? I've got 60+ copies of my realtek drivers, as well as some other duplicates, and yet DISM says no need for cleanup.

If I look in device manager, it says that "oem81.inf" is the one currently loaded.

They're just part of the driver package.

Hm, I'm still suspicious that something must be up because all the RealTek audio driver duplicates sum up to 7gb when the original driver download was only 300mb. But thanks for your help.