Windows 8 - What do you think?

Let us know what you think of the new Windows 8 release.

For me it was great on my Viewsonic tablet, far easier to use than Windows 7 was on it but on my laptop/desktop.....well all that metro stuff just sucks, please MSFT give us the option to shut it off or this OS will be a fail.

Clearly ..it's created for Tablet :crazy:

I think w8 is a great OS because it works for me without any problems, w8 makes my vista an ancient OS, I am very surprised to see that many people over here have negative view of w8, if a person like me with limited knowledge and experience can handle w8 with ease, it should be very popular with the majority of consumers IMHO.

I don't like the metro version, but you can opt for the desktop. It works well then. I am now trying to customise it to my liking?
Its fast and shuts down most apps automatically!!
Having a bit of trouble setting security in IE for my lastpass addon.
Works fine with firefox, with lastpass.
Last edited: Sep 16, 2011

I just figured out how to pin items to the start menu. Just hit start and start typing the name of the program you want a shortcut to. When it the search finds the program right click on it and a bar pops up from the bottom with two options: Advanced and Pin. If you click pin it sticks it on the end of the start menu and you can click and drag to move it wherever you want. If you click advanced it give you the options of Run, Run as Admin, Open File Location, and Pin to Taskbar.

The only problem is that I can't figure out how to change the icon. My Photoshop icon looks like this:

I'd rather the Icon filled the whole tile. I really don't need it to tell me that it's photoshop.

I think it has potential if they can make the metro UI optional, and has anyone else noticed (especially on older machines) that video playback that is smooth on every other OS, on win 8 is choppy, to the point for me where I couldn't watch .avi or .mkv files.

If this has been brought up before or elsewhere I apologize, but I didn't see it so I thought I'd mention it.

AS IS... it's not great on the desktop OR tablet.

However, if the user gets to decide if they want desktop like UI or Metro like UI for particular machines then it rocks. Metro on tablet or wall hanging "picture frame" computer is awsome. Desktop with dual 24in montior? er... no.

So both modes are awsome individually for their ntended use ("love it") but the current method of mergeng both into one experience is just not right...

Team Member
Don't worry about it.

The Metro stuff is foremost in this dev release - it won't be like that later.

You will have a choice which to run .

Desktop o/s lovers can select that and never again see that Metro geschissen.

How do I know this?

MS aren't that stupid. If they release it very similar to how it is now- it's curtains for them.

Well I stuck it out for about twenty minutes, then applied the registry fix so that I don't have to look at that terrible metro menu! I like it well enough with just the desktop, and I can live without the new menu on windows explorer as well.

I think I'd be happy enough to buy this as long as the option to turn off metro remains.

My machine is a desktop with a 24inch monitor.

Absolutely love it!!! Its noticeably faster then Win7 on everything I've tried it on (D630, Lenovo T60, E6500.) I have it installed in virtual box on my personal Elite book 8440p, but I have a 320gb WD Black drive, that I'm going to install and load Win8 as the primary OS, and run with that for a while.

On every install, its found the drivers for my hardware and installed them automatically, except for display drivers but that's to be expected. Every program I've tried works, just as Microsoft said it would. (Sec essentials, utorrent, MS office 2010, convertxtodvd. Haven't tried any games, but I imagine they would work too.

The metro UI is going to take some time to get used to but I like it. I have no doubts that MS will make that optional in the RTM as its pointless on a desktop.

Another major difference that is annoying is the boot option screen in the Developer Preview which is slow loading, After selecting my other OS Windows 7 the computer does a total reboot (Bios Post = additional 30 seconds) then starting Windows 7 compared with the traditional boot options of Vista, Win 7 of selecting OS and starting OS immediately.

Only benefit of the Developer Preview boot option screen is the repair your computer option.

I like having a new toy to play with ,its a bit of a pain with some of the settings and getting used to change is not something we enjoy , however there are lots of nice little features but i dont see myself getting rid of 7 in place of 8 in a hurry. depends on
the beta as to whether i fork out my ill gotten gains.
i did notice that in the personalize setting you can set the color of your windows to automatic and it changes with the color of your wallpaper rotation
will play some more tomorrow and see if i can get the boot window choice to work as it should, as i get a black window for a while till i power down manually to get to win 7
Anyone got any ideas on that.

edit ,just noticed the edit in the post above, will try that tomorrow.

So far 72% hate the metro stuff - some of them think it makes the whole o/s suck.

I remember Jon Honeyball saying some months ago - the idea of a desktop o/s that is designed to be prodded by tiny fingers is awful.

Member
I have tested it on my s10-3t which have touch screen and I like it! Interface is great for touch, it seems to be overall smooth despite weak hardware and it starts in like 20 seconds.

But I think metro would perform horribly on desktop. I guess they have released this preview, so people can start making apps for metro system. You can already make apps for normal win8, so they probably focused on making as much metro stuff as possible, so they will probably start working on the desktop stuff after they are pleased with metro or something.

I use ribbon interface in office and I have always liked it a lot. But I'm not sure if it's suitable for explorer, where you rarely need any of the (mouse) commands and you want as much space as possible.

Cookieman said:
I voted 'Love It' I cant make my mind up on the metro screen, I know I shouldn't like it, but for some strange reason I do. I do agree it should be optional.
Click to expand...

I have to agree with you. I actually really like the Metro UI. I am using it on a laptop though, so I can see how it can be annoying on a huge screen. Personally, I have to say that I knew Microsoft would make some kind of big change.

I do think that the Metro UI should be optional. But I also remember that when the leaked builds of 8 were out, everyone wanted shsxs.dll to use Metro. Well... we have it, now everyone hates it.

I like it on my laptop, I wish I had a tablet to try it on.

I guess "To each his own"

MS has its heart in the right place but looks like they got their Metro inspiration from that infomercial dude's sweater from way back when. 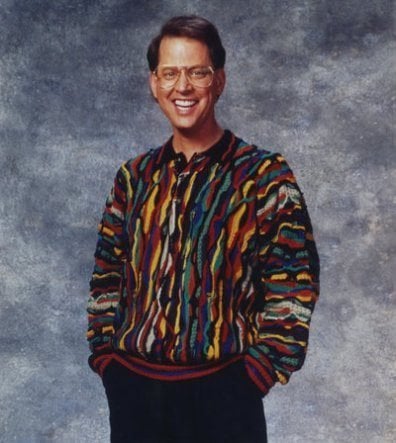 I think it is terrible. It takes a lot for me to hate a OS. I have to keep remmebering that it is pre-beta and hope it is fixed and let me have options if I want the Metro UI or not. It is just bad for desktops, but it looks like it would work best for tablet. The worst part is I am not able to shut it off since I still haven't found the shut down option. I solve this by going in power option and set it to turn off when I close the lid of my laptop. That is the only way I am able to turn it off. It would of been bad if this was on a desktop computer. I will give it another chance when it hits beta and hope they improve it.

For me there will need to be a clear desktop version without the Metro start stuff; i voted Good except for.... based on my thoughts of using my main computer day in day out. Maybe it would work and feel better that i currently think it would. But it's early days.

TeamRetic said:
I think it is terrible. It takes a lot for me to hate a OS. I have to keep remmebering that it is pre-beta and hope it is fixed and let me have options if I want the Metro UI or not. It is just bad for desktops, but it looks like it would work best for tablet. The worst part is I am not able to shut it off since I still haven't found the shut down option. I solve this by going in power option and set it to turn off when I close the lid of my laptop. That is the only way I am able to turn it off. It would of been bad if this was on a desktop computer. I will give it another chance when it hits beta and hope they improve it.
Click to expand...

Actually, Metro has grown on me a little. I didn't like it at first, but it's not so bad when you get used to it. I do like the Metro IE, although it's a bit annoying having to switch to Desktop Mode every time you want to use Flash/Java.

Admittedly it seems a little redundant at the moment, because everything runs in "Windows 7 Mode" as this is the first chance any one has had to get their hands on Metro, that will change though.