Windows 8 VHD - Create at Boot to Dual Boot with

Information
This will show you how to create a Windows 8 VHD file at boot and be able to natively dual boot with your current Windows 7 or Vista installation with the created Windows 8 VHD.

Note
Some Advantages of Using a VHD to Dual Boot with:

Using a VHD to dual boot with will act just as if the operating system was installed directly to a partition when ran at startup, but you will not have to have the VHD on a separate HDD or partition to do so like you would if you installed the OS. You could run the VHD as a dual boot say directly from within your Vista or Windows 7 partition. I think the biggest advantage of this would be for those that have a OEM computer where the OEM had setup 4 primary partitions on the HDD where you cannot create a new partition on the HDD to be able to install a second OS. Using this VHD method, they will be able to.

You will also be able to attach the VHD say in Windows 7 as a virtual drive, use the VHD as a virtual machine, is a lot easier to remove from a multi-boot installation, and a VHD will not mess with any of your current partitions or drives.

Warning
All Vista, Windows 7, and Windows 8 (except Windows 8 RT) editions support booting from a VHD.

EXAMPLE: "Choose an operating system" Screen at Boot
NOTE: This is what you will see now at boot or restart instead of the Windows 7 Windows Boot Manager screen to be able to select to start either Windows 7 or the Windows 8 from the VHD file. 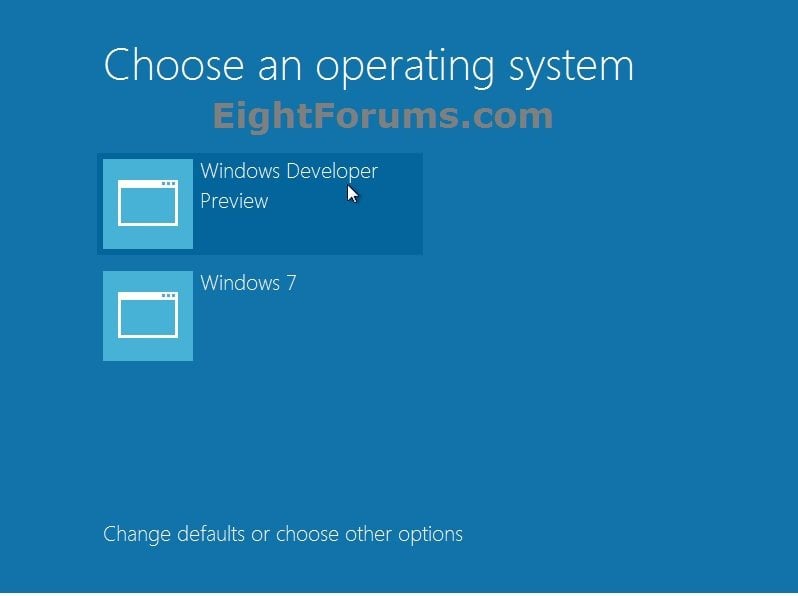 To Create and Add the Windows 8 VHD to Boot From

​
1. If you would like to create a backup of your Boot Configuration Data (BCD) to be safe, then from within your Windows 7 or Vista, open an elevated command prompt, type the command below, and press Enter. This will save your BCD backup as the MyBCDBackup.bak file in the C:\Windows\System32 folder.​
​
bcdedit /export MyBCDBackup.bak​
​
2. Boot or restart the computer from your Windows 8 Pro or Enterprise installation DVD or USB thumb drive.​
NOTE: To have Windows 7 on VHD, see instead: How to Create a Windows 7 VHD at Boot to Start with from Boot​
​
​
3. At the Install Windows 8 screen, press the Shift + F10 keys to open a command prompt. (see screenshot below)​
WARNING: If you are using a language other than English, then see this post first.​
​
​
​ 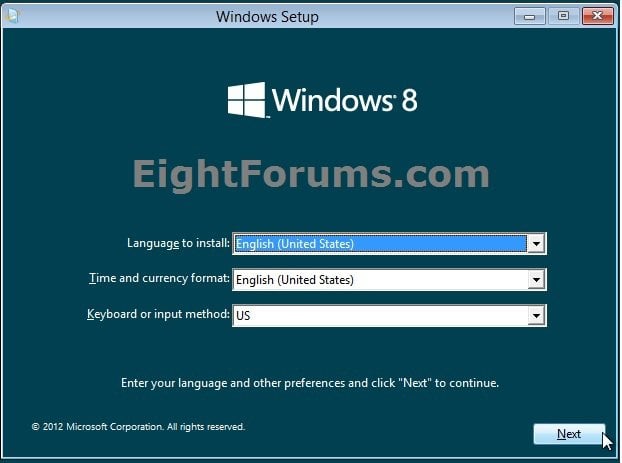 ​
​
​
4. In the command prompt, type diskpart and press Enter, then type list volume and press Enter. Make note of the drive letter for the volume that you want to create the Windows 8 VHD file on. (see screenshot below)​
NOTE: This will allow you to see what the drive letters are for each volume. They are not always the same at boot as they are in Windows.​
​
​
​
​
​ 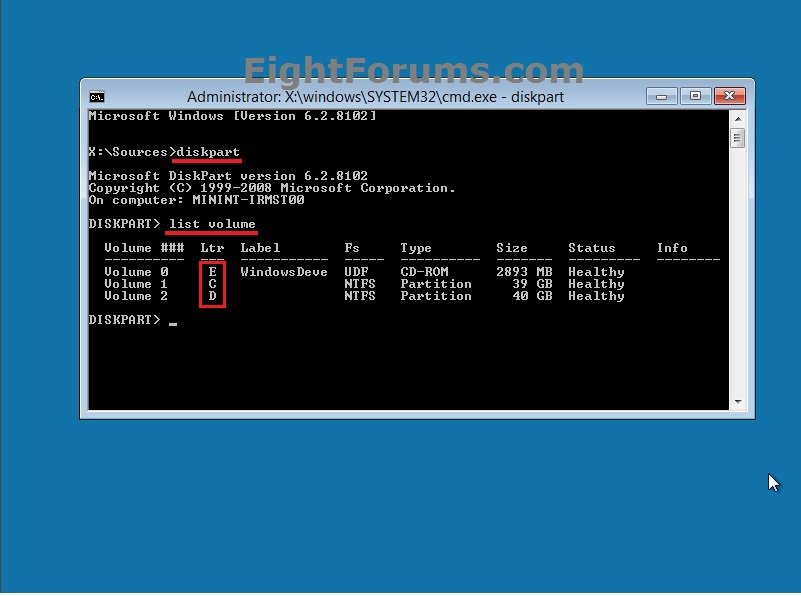 ​
​
​
5. Do either step 6 or 7 below for what type (fixed or dynamic expanding) of VHD file you would like to create.​
​
​
6. To Create a Fixed VHD File​
NOTE: A fixed VHD file will allocate the entire maximum size that you set (ex: 30GB) below on the HDD to be used by the VHD file. The VHD will only use a fixed amount of space (ex: 30GB) regardless of the amount of data stored on it. ​
​
​
A) In the command prompt, type the command below, press Enter, and go to step 8 below.​
​
NOTE: Substitute the D drive letter in the command below for what volume (step 3) you would like to create the VHD on. You can substitute the Windows8 name with any name you would like within quotes for the VHD file instead. You can also substitute the maximum size of 30720 MB for the VHD to the maximum size you want instead in MB (1GB = 1024MB).​
​
​
​
create vdisk file="D:\Windows8.vhd" maximum=30720​
​
​
​
​ 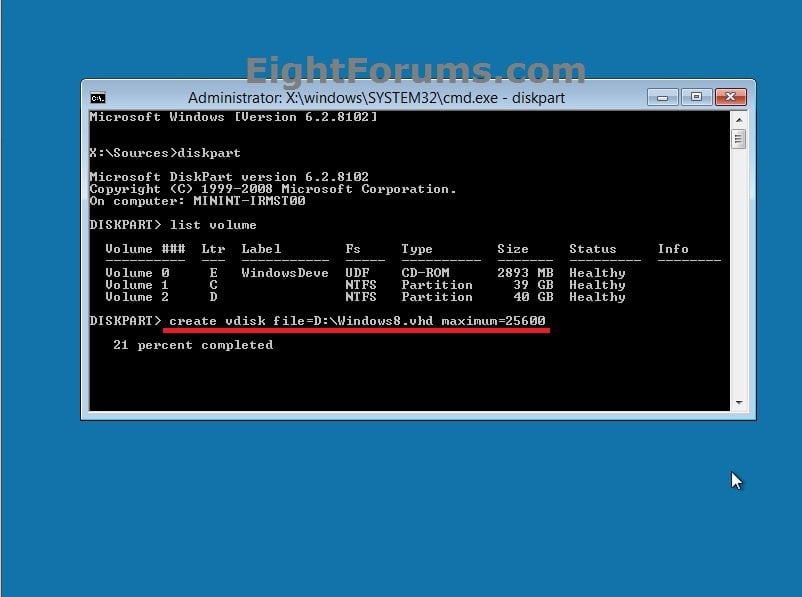 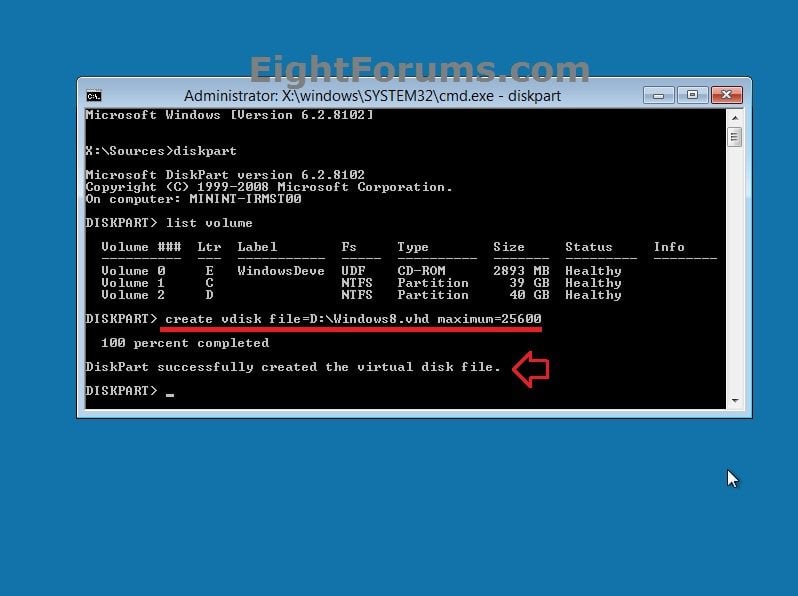 ​
​
​
​
7. To Create an Dynamically Expanding VHD File​
NOTE: A dynamically expanding VHD file will only be as large on the HDD as the amount of data that is saved in the VHD file, but is able to get as large as the maximium size that you set below (ex: 30GB). The HDD space used by the VHD does not shrink (compact) automatically when data is deleted in the VHD though. ​
​
​
A) In the command prompt, type the command below, press Enter, and go to step 8 below.​
​
NOTE: Substitute the D drive letter in the command below for what volume (step 3) you would like to create the VHD on. You can substitute the Windows8 name with any name you would like within quotes for the VHD file instead. You can also substitute the maximum size of 30720 MB for the VHD to the maximum size you want instead in MB (1GB = 1024MB).​
​
​
​
create vdisk file="D:\Windows8.vhd" maximum=30720 type=expandable​
​
​
​
8. In the command prompt, type the command below and press Enter. (see screenshot below)​
NOTE: Substitute the D drive letter and Windows8 VHD file name in the command below to the same one that you used in step 5 or 6 above.​
​
​
select vdisk file="D:\Windows8.vhd"​
​
​
​ 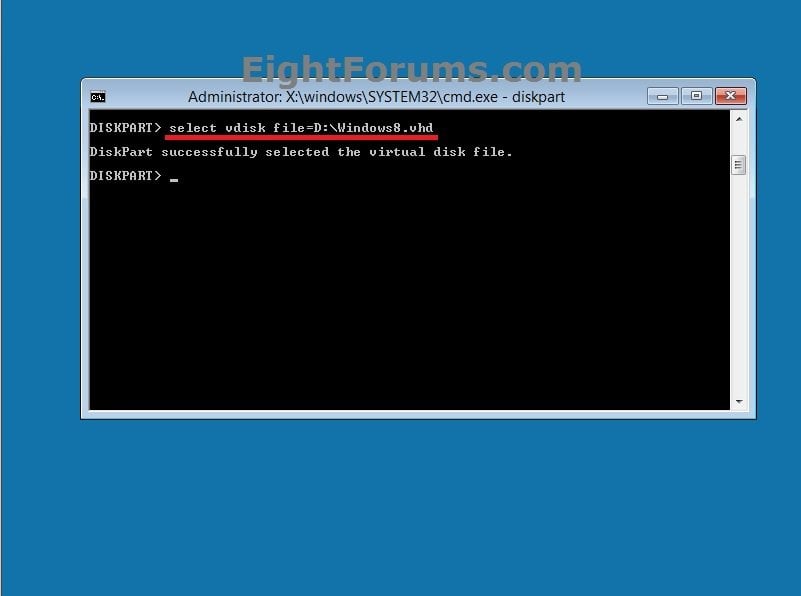 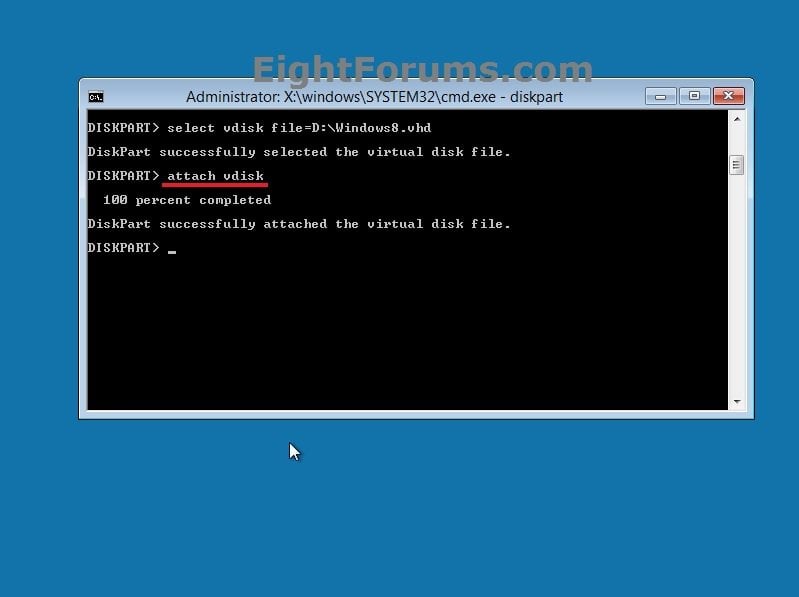 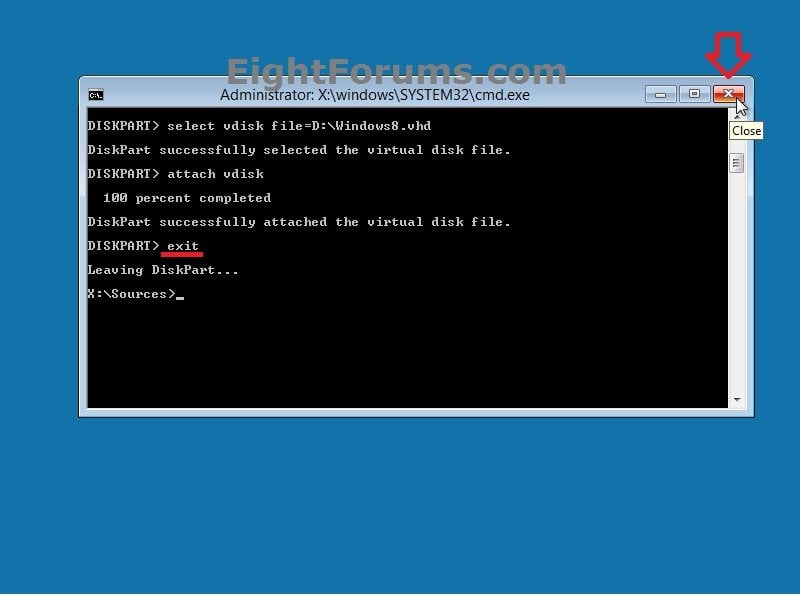 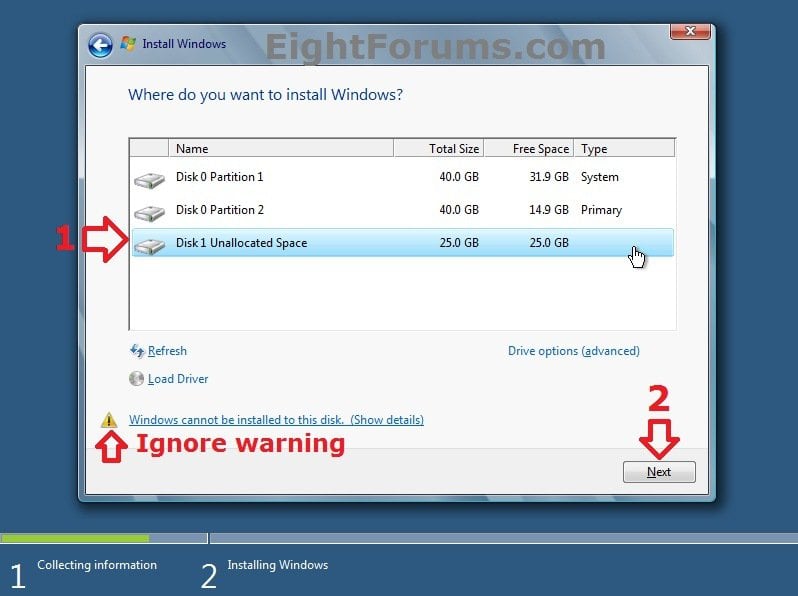 ​
​
​
12. When finished, you will be in Windows 8 with Windows 8 set as the default OS to start automatically after the wait time. Restarting Windows 8 will allow you to be able to select what OS you would like to start with like in the example at the top of the tutorial.​
​

To Remove the Windows 8 VHD from Boot


NOTE: This option will remove Windows 8, and leave you with only Windows 7 or Vista as an option to start. 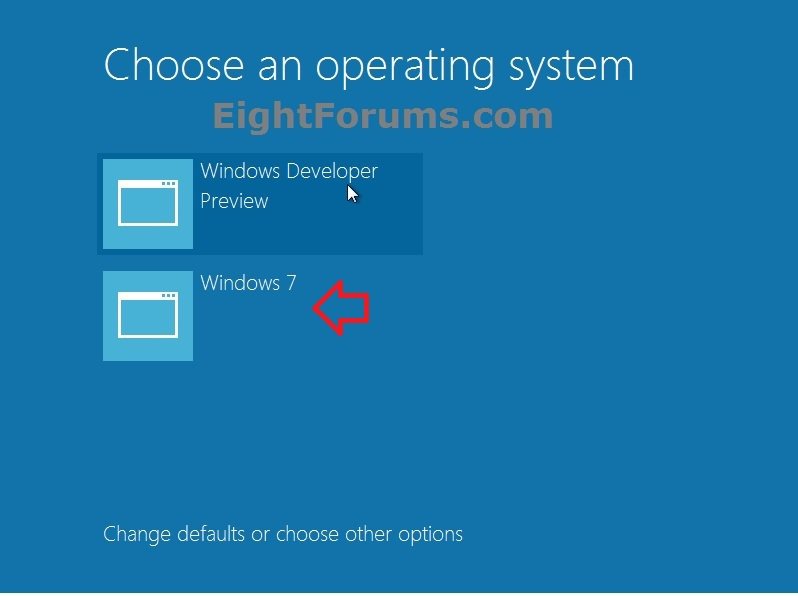 ​
​
​
2. In Windows Explorer, navigate to the location of the Windows 8 VHD file that you created in step 6 or 7 in OPTION ONE above, then either delete or rename the VHD file.​
​
3. If you used step 1 in OPTION ONE and would like to restore your BCD back to how it was when the backup was created to be safe, then open an elevated command prompt, type the command below, and press Enter.​
​
bcdedit /import MyBCDBackup.bak​
​
4. Restart the computer, and you will no longer have Windows 8.​
​

You'll need to create a new thread in the Installation & Setup forum area for more help on triple booting with Linux since that is not related to this tutorial.

Thanks for the reply. I might consider posting a new thread, but also just thinking of just temp removing Linux as that would be the easiest/simplest. As for the flash drive, thanks sounds like I won't have to worry.

You're welcome. I hope it goes smoothly for you.

VIP Member
Guru
Hmm, this is interesting. But what is the advantage of the VHD versus installing Win8 directly into the designated partition?

I added a note box at the top of the tutorial for some main advantages.

VIP Member
Guru
Thanks Shawn. Those are some good points.

Hi It feels gud around here, BTW this is to ask which is better between VHD fixed and dynamic ?

VIP Member
Guru
If you are not sure how much space you will need, dynamic is a more flexible setting. It takes the space as needed. With fixed, the total space is being allocated right away. Fixed may have a bit less overhead in processing though.
Last edited by a moderator: Sep 21, 2011

nice tutorial.... Shawn, can you tell me that the features like: the new task bar, the aero, the animated boot screen, the new logon screen are there in the Windows Developers Preview? and can you tell me which all features are not there also..?

djshonrock said:
nice tutorial.... Shawn, can you tell me that the features like: the new task bar, the aero, the animated boot screen, the new logon screen are there in the Windows Developers Preview? and can you tell me which all features are not there also..?

Just have a read of the forum, all that is explained and more.

will i get transparency without video driver?

Give it a try and let us know.

Since Windows 8 will install and act as if you installed it normally directly to a partition, you should. I did with the default video driver included in Windows 8.

I'm getting the Developers Preview on the 1st of oct.. jus wanted to know some details... thanks for all the answers...

You're most welcome Shon. Glad that we could help.

Frankly speaking, sevenforums and eightforums are the most useful website for me in the internet. if i post a threads, i will get to get the problem solved within a day or two.. Thanks to the great members...

Could you kindly expand your excellent tutorial to include installing the VHD on a raid array??

Comments:
I tried this onto a simple hard drive and it works great ( as did some time ago your similar article for windows ultimate in the Win 7 section ) ! Thanks! But i really want to put the VHD on my raid array. With your example the raid drivers have not been placed yet so i can only put the Win 8 VHD on the slow non raid drive.
I did try delaying my visit to command prompt and using diskpart until AFTER the raid drivers were installed. I created a few VHDs.
They were listed in the installation of Win 8 set up but the install program told me i could not choose these partions.
HELP!