The other day we were struck by some heavy bolts and the house literally shattered. Thor seemed pretty pissed at my neighborhood and I considered shutting down all the comps. Even if the house has surge protection and I also have (I do not know what it is called in English, surge protection sockets?) like the one in the picture below..

or a bigger connector 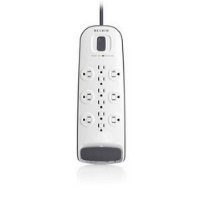 So I felt reasonably protected, but still decided to shutdown stuff.

Then it hit me. I have 5 Windows based desktops (3 of them are servers) and one Unix based NAS. How do I shutdown them all as fast as possible? Cleanly.

Well, I could use shutdown /m via CMD, provided I specify a user account with local admin rights on respective computer. But how do I shutdown the NAS? It is a Promise Smartstore with Unix based Web Interface.

Any ideas? The thing to come up with would be to write a CMD that will make a clean shutdown of all the computers on a network, granted appropriate rights. The CMD is run from either a Linux or Windows machine, but should work for both environments, if possible.

Once you shut everything down it might also be a good idea to unplug your power cords from the wall outlets and unplug your phone or network cables. The power button or switch on the power bar usually just disconnects the one hot wire. The neutral and ground are still connected. The most common protection circuit in these devices is a MOV, Metal Oxide Varister. They have a threshold voltage that when exceeded makes them conduct. They effectively become a short circuit and shunt the voltage spike to ground. They have a current limit though so they can fail. They may save you from the first hit and maybe even the second hit, but after that all bets are off. When they fail they become an open circuit and don't work anymore. Quality power bars will give you a failed indication and may actually disconnect that line from the power bar. After that you need to buy a new power bar. I personally consider it protection for when I'm not home to unplug the equipment.

EDIT: It may be faster to just momentarily push the front power button the case. If the power options are set correctly the should shut windows down gracefully. I'm assuming your servers don't have monitors or maybe even keyboards attached.

When I worked for Telecom Australia, I was shown a picture of the roof of a concrete "bunker" that housed equipment for the radio tower that was on top.
The tower was struck by lightning and the charge traveled down the coax into the "bunker".
It made a 20cm (~8") diameter hole in the 15cm (~6") thick concrete roof!
Obviously all of the equipment inside the "bunker" was destroyed.

I would recommend using a UPS (Uninterrupted power supply) to one's computer setup. This way it will allow the user some time to save data at that time and shut down correctly even though the power is off to the rest of the house.

That is all good and dandy, but if you have your comps up to 50 meter apart and need to shutdown everything really fast, but still clean?

A UPS is the best choice, but you should ensure it has both power and network/phone protection. I've lost 3 motherboards to surges through the cable modem into the network port. At first, just the networking is dead, but once a surge happens then other components start getting flaky and fail.

Don't rely on cheap power strips. They generally won't protect much. It's important to get something that has lightning surge protection rating.

There are higher quality power strips that are acceptable if you don't want to do the UPS route, but again.. make sure you protect anything that can touch an outside wire.

As for shutting down, you could just create a script that executes some shutdown commands for the windows server. Shutting down the NAS is a bit more problematic, since you probably don't have access to the Unix command line. You could always get one of these:

I have had 4 lightning incidents none have been due to the power plug, all damage was done by other wiring phone, sensor or cable.

labeeman said:
I have had 4 lightning incidents none have been due to the power plug, all damage was done by other wiring phone, sensor or cable.
Click to expand...

Yeah, cable is pretty notorious. Chances are, your homes is well grounded, and the power lines well insulated. On top of that, most homes have good circuit breakers that will trip if there is a surge. Cable and phone, however, is not so well controlled and is generally direct access into your home to the cable modem, to your computer.

The worst you usually have to worry about with power is a direct lightning strike on your house, and brown-outs (when power drops below appropriate levels). Brownouts can be almost as damaging as a surge.

Power is well grounded at the transformer and at the meter base the others are not. A brown out will cause motors to over heat and burn up as they will still try to use the same amount of power no mater what the voltage.

An UPS is not an option, not a single one anyway, since I have my main server in the garage, another desktop in room 1, my main desktop in room 2 and my remaining two servers also in room 2. At least they are on the same floor...

Maybe my best bet, after all, is a remote trigger via the power supply and a script shutdown /m.

I use a UPS on all my systems and the software will do a soft shutdown after a short time when I loose power. If I want to kill all my systems I can just unplug the UPS from the wall or flip the circuit breaker in the panel and all of them will do a soft shutdown. Its a quick power kill and gentle shutdown of systems. Also for power hits or brownouts the UPS still protects my system and they also carry a $25000.00 guarantee if my system gets fried. I have them on TV's also.

Shutdown anything that writes to the NAS first (your computers) and then have a battery backup shutdown the port that you have the NAS plugged into.

One possible configuration is a setup like this. When you have an on battery event and 3 minutes pass by, the network shutdown command is sent. All computers with the PowerChute shutdown will gracefully shutdown. Then you can have another on battery event trigger at 5 or 6 minutes that turns off the power to the outlet that the NAS is connected to (you'll need to have the NAS connected to the battery backup outlet). I think you can pretty safely shutdown a NAS as long as the systems that can write to it are powered off first. I'd talk to the manufacturer of the NAS and see what they say about plug pulling the thing if nothing else is live on the network.
Last edited: Oct 23, 2013