Solved Thinking of going back to Windows 7

I am totally fed up with Windows 8. This is my computer. I bought it, I paid for it. I tried Windows 8 for two months now, and it gets worse each day. So anyone have some suggestions on installing Windows 7 on mu computer? I will have to buy Windows 7 and install it and I just want any advice to make the transfer easier.

Take look at this tutorial:
http://www.eightforums.com/tutorials/13326-downgrade-windows-8-windows-7-a.html

James, you are not alone. Plenty have done the same.

But in the mean time: what do you not like about Windows 8? We may be able to help you remedy those without downgrading, or they could be problems specific to your system and factory configuration. Not to mention Windows Blue is supposed to come out in the next few months, which should remedy a few major problems.

Have you tried "Start is Back". It is probably about as close to Windows 7 as you can get on windows 8. There is a free trial and if it fixes your problems would save you the cost and hassle of doing an install with Windows 7

Startisback will not work on the leaked 8.1 versions. Almost guaranteed it won't work with the final 8.1.

Tihiy said the code it relies on has been removed by MS.

What about Classic Shell and Stardock's Start8. Will they still work? Anyone tried them?

SIW2 said:
Startisback will not work on the leaked 8.1 versions. Almost guaranteed it won't work with the final 8.1.
Click to expand...

If you do not like Metro, I don't think it matters to much. If Blue is like the leaks out at the moment (which are only showing tweaks to the Metro interface) just don't install 8.1.

Hey James, I use Stardock's Start8 and ModernMix, these will give you the look and feel of windows 7 but with all the benefits that windows 8 has to offer. There is also Classic Shell which is free, Stardocks are free to try but only cost $5 each. This way you'll have the best of both.

Get the Start menu back with Start8™!

SIW2 said:
Startisback will not work on the leaked 8.1 versions. Almost guaranteed it won't work with the final 8.1.

Tihiy said the code it relies on has been removed by MS.
Click to expand...

I'm wondering, are they going to remove the code for the rest of the software out there that some of us are using?

If they do, I will have two copies of Windows 8 Pro Upgrade for sale at a very reasonable price!

MS clearly do not want us using start menus - they want to shove the start screen at us. MS is removing their own code which some of the better start menu replacements rely on.

That makes it harder for the people making them. They will have to rebuild them to use services instead. Some already do it that way - they may need adjusting.

Therefore there will be start menu replacements which will be able to function on 8.1

MS can't do anything more than that. They dare not send out anything specifically aimed at killing those. That would be suicidal.

I'm personally going to wait for Blue to come out before passing judgement. But the big mess surrounding the Xbox One does have me concerned about how MS is handling 8.1.

Some simple tweaking and you can have Win8 looking and acting almost identical to Win7. I had a new laptop come in this week that the owner just hated and he was completely lost. I added Stardock's Start8 & tweaked it so it would boot straight to the desktop with automatic logon. Now there is no need for him to ever see the Metro screen again and he has the added benefit of Win8's speed. He has called me 3 times telling me how much he likes it. I recommend you try doing the same thing-it's a whole lot cheaper than buying Windows 7 and going through the hassle of downgrading.

Hey, great responses from you all. I will certainly have a go at those suggestions,
Have to admit I'm over my angry spell. The thing that sent me over the top was that I couldn't slap a cd-rom in and load it. I suppose there are different BIOS for the various machines, and the information I received from the Internet just didn't seem to work. But that is straightened out now so I've calmed down a bit.
I really appreciate your responses, thanks so much.

8.1 or Blue, or whatever MS wants to call it. Will be a major update for Microsoft's future imo(and yea they have plenty of money to do whatever they want with). But, a lot of people where put off by the whole Metro UI, and the obviously tablet oriented features being forced on the traditional desktop users. It has lead to a lot of bad reviews, and negative publicity. When in all honesty the desktop mode of Windows 8 (minus the lack of a start button) is a more refined, and in my experience so far, better performing OS then 7 was.

I got Windows 8 about 6 months ago, on my girlfriend's laptop, then a little later when I built my PC. As a desktop only user Windows 8 has been a great OS. I have had a few blue screens, and other issues. I think more related to my HDD then the OS. But, it is really dumb imo that you almost need to get Start8, and ModernMix for the OS to "feel" right on a desktop machine. If anyone is new to Windows 8 I would very highly recommend getting both programs, they are both from Stardock and fairly cheap. Start8 is obviously the start button only you can actually customize the menu's, and the actual look of start orb its self. And ModernMix allows you to run Metro apps on the desktop just like any other program. Run them in a window, or full screen. It also adds the Windows 8 style minimize and close buttons in their traditional places. Along with placing them on your task bar like any other currently open program would appear. Finally my personal favorite part of the package, you can completely disable the hot corner nonsense if you want, and boot straight to the desktop. I personally have all them turned off. And only the charm bar active when I am in the Metro UI itself.

Microsoft really should take at look at what third party software devs are doing. And see how successful they are. These two programs are in my opinion two very basic features that Windows 8 should and needs to have built in. If they want to focus on tablets that's fine. I love my tablet. But, don't force a tablet experience on my desktop PC please. 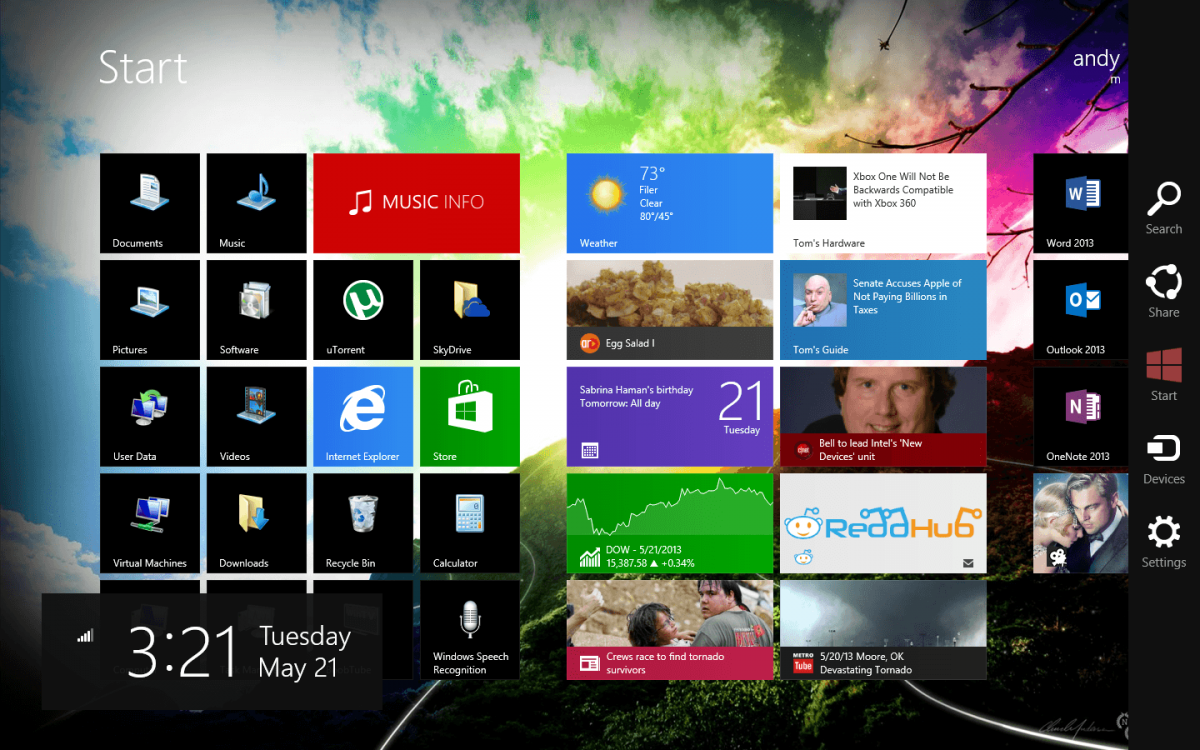 Or you can just do this and have a full sized start menu....

You can't simply attach a CD drive to your laptop and just boot off a disk. ALL new Windows 8 PCs have the new BIOS firmware called UEFI BIOS. It is the reason why you see the Dell OEM logo at the boot screen over the Start icon when you turn your PC on. When you try to find information to get something to boot with EUFI, I bet you found that some uninformed individuals out there say hit F2 or F12 at boot up. THIS DOES NOT WORK.

Welcome to Windows EightForums, james1st, glasskuter, and Nerva. It's good to have you all aboard.

Coke Robot said:
View attachment 22339
Or you can just do this and have a full sized start menu....

I cannot think of anything I would want less than a full sized start menu. Just like full screen apps, i don't like them. I don't want my whole screen changing into a bloody menu of applications to pick from. On a cell phone with a tiny screen, sure. On a full sized computer with a monitor between 13.3" or 27"....nah.


Coke Robot said:
When you try to find information to get something to boot with EUFI, I bet you found that some uninformed individuals out there say hit F2 or F12 at boot up. THIS DOES NOT WORK.
Click to expand...

Well, that is a radical change from the norm. And for the majority of people, who haven't purchased Windows 8 and aren't familiar with UEFI BIOS's it's a very reasonable suggestion. I work with a bunch of techies and these guys haven't worked with it day in and day out. Most believe UEFI just means a graphical BIOS where the mouse works.

Coke Robot said:
The BIOS's on other PCs are the same. Usually, you'll need to press and hold the Esc key and THEN hit the power button to get into a boot menu or firmware settings. I think on Dell PCs, you can press and hold F2 and then hit the power button to disable certain things to get back to traditional BIOS or a boot menu.
Click to expand...

On a Dell, you press F2 and that puts you in the BIOS. Usually to boot from a non UEFI boot media, you have to disable Secure Boot and enable legacy boot support. That's how it is on a Dell. That is also my experience as well with Acer.

We recently purchased a Samsung Series 7 laptop for my wife and it's also F2 to get into the BIOS. By default, it won't boot from a UEFI key, you have to go into the BIOS and disable FAST BOOT. Then, you boot up, press F2 to get to BIOS and the boot options are listed in there and you pick to boot from your USB key.

My work desktop, running an Asus P8z77-v LK mobo is the same was as the Samsung. You have to access the BIOS and pick the device to boot from in there. There isn't the typical F8 or F12 boot option on power on.

I don't want my whole screen changing into a bloody menu of applications to pick from
Click to expand...