How to Change Maximum Disk Space Used by System Protection and System Images in Windows 8 and 8.1​

Information
System protection is a feature that regularly creates and saves information about your computer's system files, programs, drivers, and registry settings as restore points for all drives that have system protection turned on. You can use these restore points to do a system restore to return these items to an earlier point in time without affecting personal files (ex: anything in C:\Users\(user-name) folder). Restore points are created just before significant system events, such as the installation of a program or device driver. They're also created automatically by Windows using a scheduled task once every seven days if no other restore points were created in the previous seven days, but you can create restore points manually at any time.

This same setting also determines the maximum disk space that can be used to store system images on a drive letter. The size of a system image can be quite large since it will include all system drives in the image by default plus any drives you have included. If you want to keep multiple system images, be sure to increase the max size accordingly.

This tutorial will show you how to manage and change the maximum disk space you want to be used for system protection restore points and system images in Windows 8 and 8.1.

You must be logged in as an administrator to be able to change the maximum disk space used for system protection and system images in Windows 8. 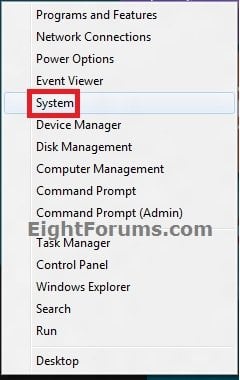 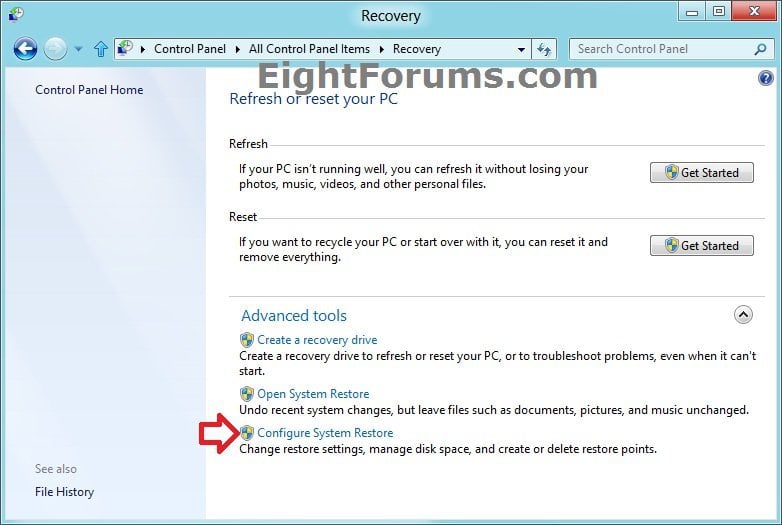 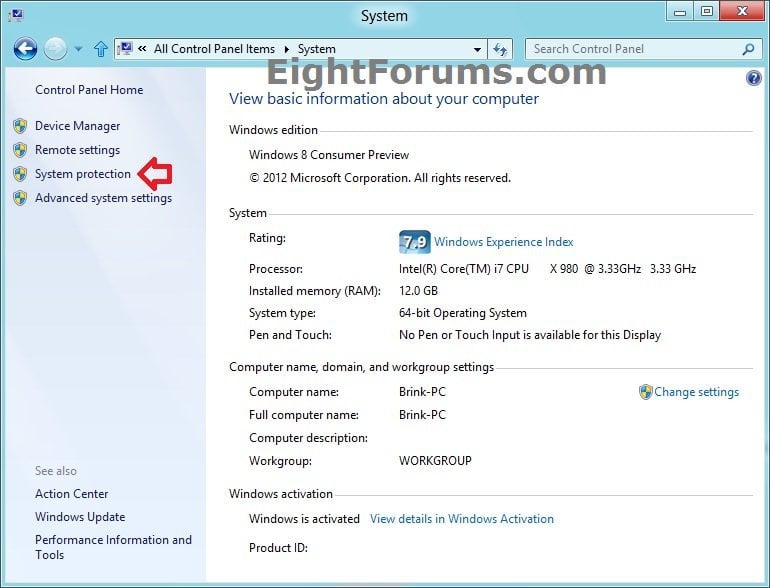 ​
​
​
6. If prompted by UAC, then click/tap on Yes.​
​
7. Select a listed drive that system protection has been turned on and that you want to change the max disk space usage of, then click/tap on the Configure button. (see screenshot below)​
​
​ 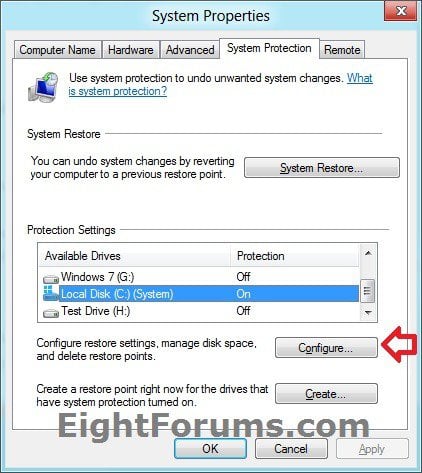 ​
​
​
8. Move the Max Usage slider to the left (decrease) or right (increase) to adjust how much you want for this drive, and click/tap on OK. (see screenshots below)​
WARNING: If you decrease the disk space to be smaller than the Current Usage space being used by system protection, then older restore points will be deleted.​
​
​ 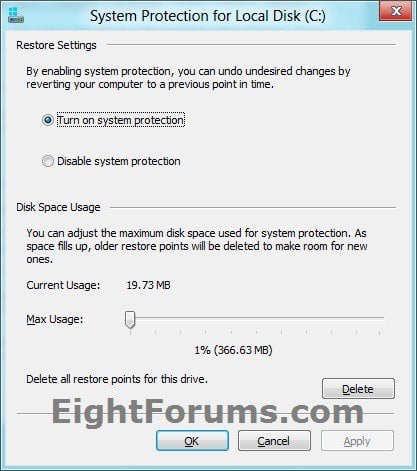 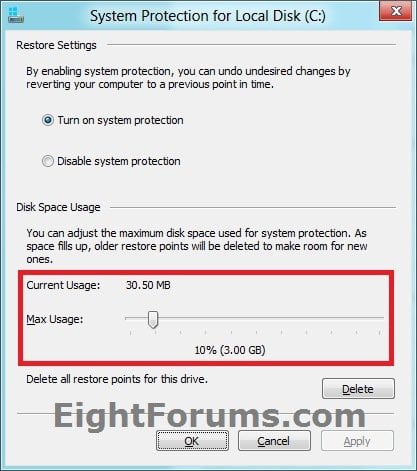 ​
1. Open an elevated command prompt.​
​
2. In the elevated command prompt, copy and paste the command below and press Enter. (see screenshot below)​
NOTE: This will give your the details on the Used, Allocated, and Maximum Shadow Copy Storage space for the drives that you have system protection turned on.​
​
​
​
​
vssadmin list shadowstorage​
​
​ 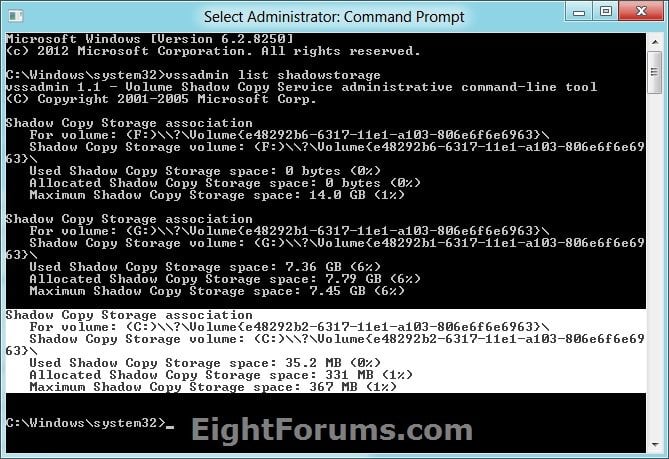 ​
​
​
​
​
​
3. In the elevated command prompt window, type the command below for the drive letter and max size you want, and press Enter. (see screenshot below)​
WARNING: If you decrease the disk space to be smaller than the Current Usage space being used by system protection, then older restore points will be deleted.​
​
​
vssadmin Resize ShadowStorage /For=C: /On=C: /Maxsize=3GB ​
​
OR​
​
vssadmin Resize ShadowStorage /For=C: /On=C: /Maxsize=5%​
​
​

Note
Substitute the drive letter and size amount for what you want instead.

I am running the new Windows 8.1 preview (64 bit). The computer keeps deleting my Restore Points. I have set the configure setting to about 10% of my SSD space (10 gig or so). I can create the restore points, however, after a day or so and some re-boots I either have no restore points or maybe 1. The allocated space keeps getting re-set to 0 bytes.
When I was using Win 8 all was working fine. Any suggestions?

Do you dual boot with any other OS, or use any type of 3rd party disk defragmenter program?

Could you also post a screenshot of your System Protection settings like under step 8 in Option One after it's reset to see how they look?
Last edited: Jul 4, 2013

Thanks for the fast reply. I have two ssd's, one with Win 7 64 bit hp, and one with Win 8.1 pro 64 bit. I am using a Asus Maximus V Gene and a Intel I5 3570k along with 16 gig of ram. Also installed is a Asus/Nvidia 660 graphics card. I am not dual booting. The operating systems each reside on their own seperate SSD and were installed with only one SSD connected at a time as not to cross pollute. I use Easy BCD to select witch operating to boot into. I do not defrag the SSD's. I will use the Intel or Samsung trim utility about once per week. I will post screen shots later as my wife is using the computer now and I'm on my I Pad.Thanks.
John

Not sure if the trim utility is wiping the shadow space on the HDD, but that would be something to look at to see if it happens right after using it.

Since you do multi-boot with W7 and W8, check to make sure that you do not have system protection turned on for the other OS's HDD while in each OS.

I will check on the trim function. Since my operating systems are on seperate ssd's does that mean I'm really dual booting? There is no indication of that on either operating system. However, the Win 8.1 pro does list the Win 7 system in the restore point configure window. I will try configuring the restore function on only one system and choosing to protect the other SSD.
Regards,
John
Georgetown, Texas

You'll need to have System Protection set to be turned off that way in both Windows 7 and Windows 8 for only the other.

It is just like the restore system is ignoring the max usage and deletes restore points whenever it likes.

This happened a couple of times since I've noticed it.

Do you have any 3rd party utility programs installed that may be deleting them?

If you dual boot, it can delete restore points when starting the other OS.

With 3rd party program you mean something like Ccleaner?

I have no dual boot, wouldn't be smart since I play a lot with the spaces.

Yeah, CCleaner or one of those all-in-on tweaking type programs may have an option to delete restore points.

I'm not sure why it would be using more space than set. You might see if turning off system protection, restart the PC, and turning on system protection may sort the size issue. This will delete all restore points though.

Besides of Ccleaner i wouldn't know which other program could delete them.
But if Ccleaner deleted a system restore point, then it would only getting stranger why I didn't get any space back.

I have used Ccleaner twice now, but it hasn't removed the restore points. 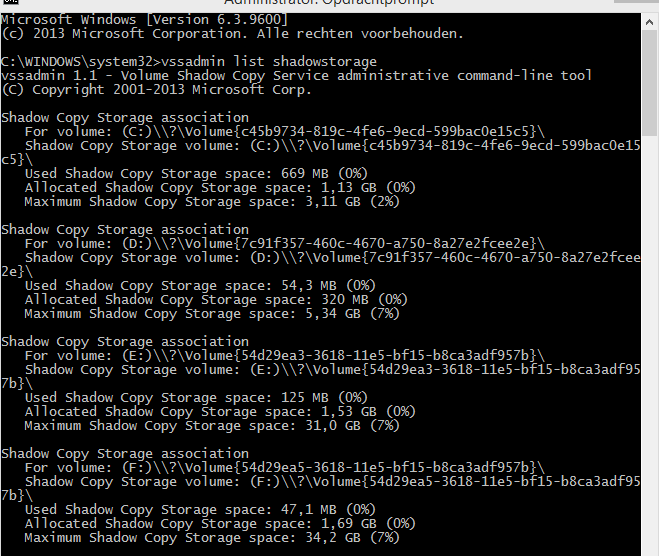 The size of the restore point is nothing to be concerned about since that's nothing unusual. I'm more interested in why your other restore point got deleted.

As a test, increase the max size to about 10% if able, and manually create a few restore points to see how they do over the next few days. Be sure to see if you may be able to notice any particular action or time when/if a restore point gets deleted.

Changed the size to 10% and added a new restore point, more will follow in the next week and I'll watch activily my activity.

Windows can hold a max of 3 restore point?

It should store as many restore points as your max usage will allow. Something is deleting them, but I'm just not sure what. Perhaps a Windows Update?

Keep an eye out to see if METHOD ONE for system images in the yellow tip box at the top of the tutorial below may apply to this for using up the max usage space.

As a test, see what restore points CCleaner has listed to see if they match with what's in System Protection. They should of course. 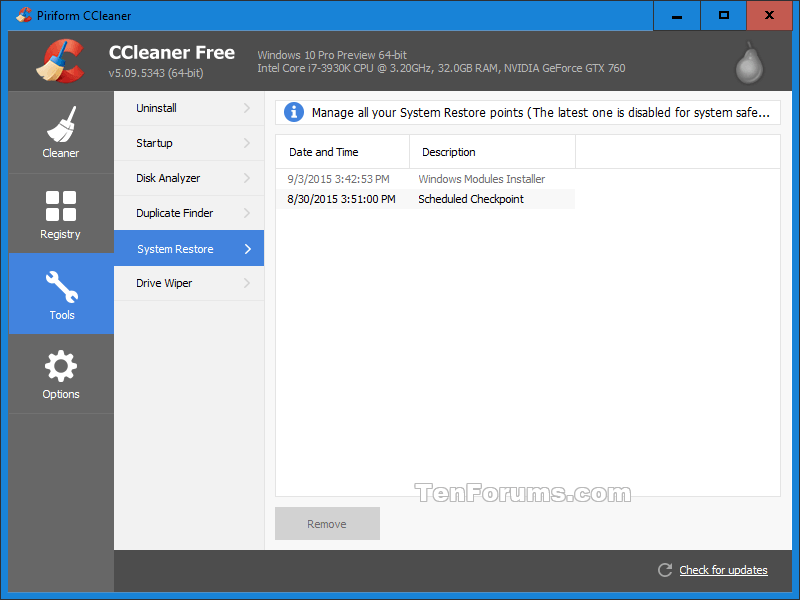 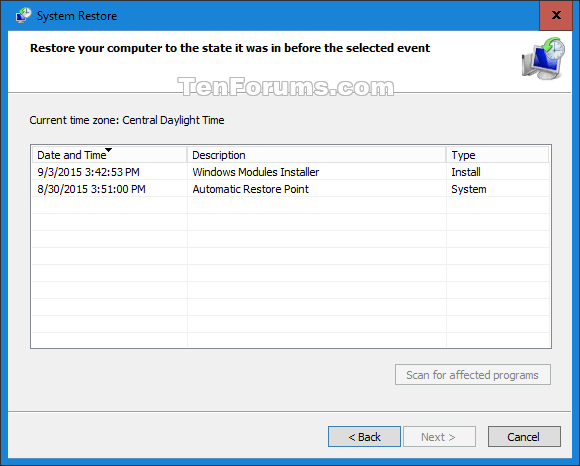 They're not matching, restore system hides some?