How to Generate and View a System Health Report in Windows 8.1​

Information
A System Diagnostics Report, also called a System Health Report, details the status of local hardware resources, system response times, and processes on the local computer along with system information and configuration data. This report includes suggestions for ways to maximize performance and streamline system operations. You can use this information to help track down any errors that may occur within your software or hardware.

This tutorial will show you how to view and generate a system health report in Windows 8.1.

Note
When the report is generated, you will see a list of: the status of any critical components on the computer, whether or not the problem has been detected, and any possible solutions you can try. This can be a very useful tool for troubleshooting problems and for a great source of information on your system.

Each category shown in the System Diagnostics Report can be expanded by clicking on the button on the far right. Categories include:

To Generate a System Health Report in Windows 8.1
​
1. Press the :winkey: + R keys to open the Run dialog, type perfmon, and click/tap on OK.​
​
2. If prompted by UAC, click/tap on Yes.​
​
3. In the left pane of Performance Monitor, click/tap on Data Collector Sets to expand it, click/tap on System to expand it, right click on System Diagnostics, and click on Start. (see screenshot below)​
​
4. It will collect data for 60 seconds before the system diagnostics report will be ready to view in step 3 of OPTION TWO below.​
​
​ 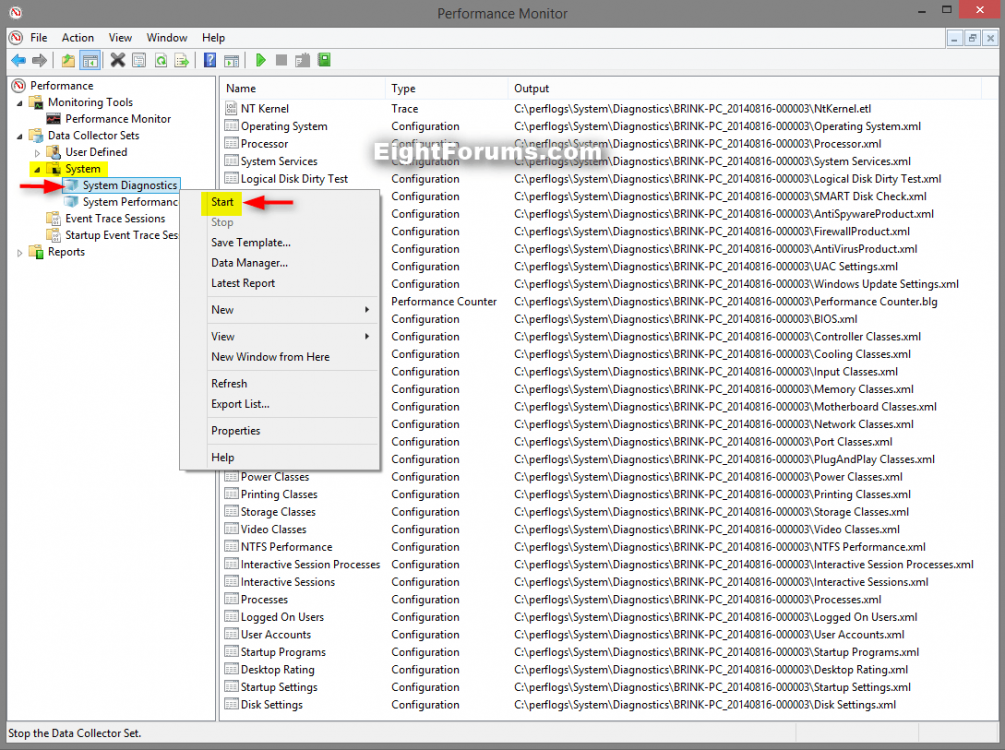 Tip
If you like, you can delete a system diagnostics report by right clicking on a listed report, click on Delete, and click on Yes to confirm. 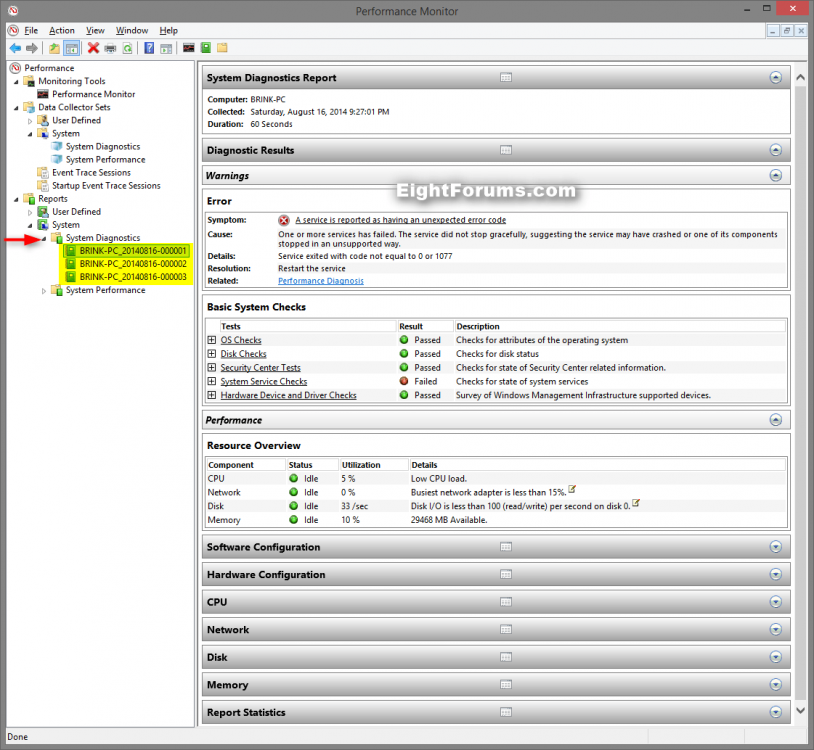 I decided to run the report after some challenges with Macrium Reflect (now resolved) where a couple of people suggested checking the health of my laptop. Although they suggested 3rd party tools I thought maybe the inbuilt one would be as good??

I would like to say the results are all Greek to me, but I do actually read some Greek so maybe I should say they're all Chinese instead

Anyway, a couple of things failed the hardware device and drivers check and I wondered if you could advise me what to do now to follow up on these please.

The details from the report are below. 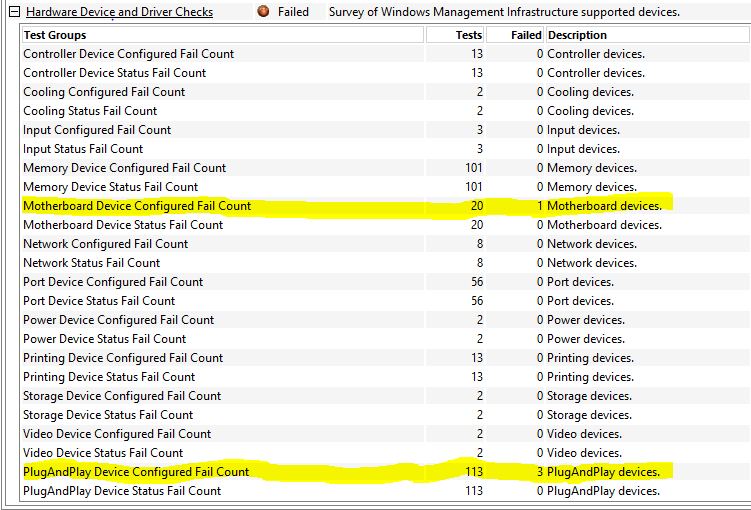 When I previewed my previous post the report details were showing onscreen; when I saved the changes they have disappeared?? If you want me to give you the detail, can you please advise me how to either add an attachment successfully (I followed the guidance) or how to copy and paste into the post. Thanks.

No worries, you had just forgot to attach the image to your post from the paperclip icon again after uploading it like in step 10 and 11 in OPTION TWO below.

The screenshot doesn't let you know specific devices, but usually it would be driver related. You could check in Device Manager to see if any devices show having a problem that may be for these. Afterwards, install the latest drivers for the devices and motherboard chipset to see if that may help.

To be honest it usually takes me a few minutes (and a look at a tutorial) to remember how to start a new thread so missing the important bit about adding an attachment isn't that surprising.

I had a look in the Device Drivers folder but saw nothing untoward (not that I know quite what I would be looking for. I then ran the Dell System Checkup which suggested that all was okay.

I had a look on the Dell site and there are a number of driver updates listed there. These cover things like BIOS (not so long since I flashed it when the camera stopped working), applications, chipset, audio, video etc. Should I install them all, and then start to check regularly to keep everything up to date?. I've never been quite sure what to do regarding drivers to be honest

If you're not having any issues from it, then I would worry about it.

It's usually a good idea to check for newer driver versions for your devices every once in a while. They could provide bug fixes, performance tweaks, and sometimes new features for a device. I like to read the release notes of the newer driver version to see what changes have been made since the last version to see if it's worth installing or not.

I updated some of the drivers that were on my list from Dell, re-ran the perfmon report and now have no motherboard or plug and play device failures!

I really appreciate these tutorials. Not just this one but the others as well. Very helpful

I'm happy to hear that they have been helpful for you.

But today is another day, and I ran perfmon again and unfortunately those same failures (motherboard and plug and play devices) are on the report again so I have no idea what to do now. Any suggestions?

The reason I ran perfmon was to compare the report from one laptop against another. Both are the same Dell model, bought at the same time and with the same Windows updates, though used by 2 different people so the programs etc. are not all the same.

Anyway, I ran a perfmon report on the second laptop yesterday, and got those same failures on the motherboard and plug and play devices (so both laptops were showing the same issues). Today I updated some drivers on this laptop. I did the same ones as on the other one except did not flash the bios as this was done not so long ago, and the version is still the same, and did not update the audio driver.

Afterwards I rebooted and ran perfmon again, only to find the failures are still there (so maybe flashing the bios was the thing that got rid of them on the first laptop - although only temporarily??).

So essentially both laptops are showing those same failures on the latest perfmon report.

However the second laptop also has an additional warning and information item:

This VolumeDirty flag warning was not there when I ran perfmon yesterday [but there was a warning that 10% of events were lost during data collection. The settings for Event tracking for Windows (ETW) maximum buffers and buffer size may not be optimal depending on which data sets are being collected.]

I ran chkdsk but no errors were identified. I don't know what to do now about this warning.

And this may or may not be relevant:

Yesterday I also ran dism.bat on this machine, in relation to a problem with Macrium Reflect free edition, which will not open.

Errors were found and corrected during this process and the second sfc scan was ok (see below): 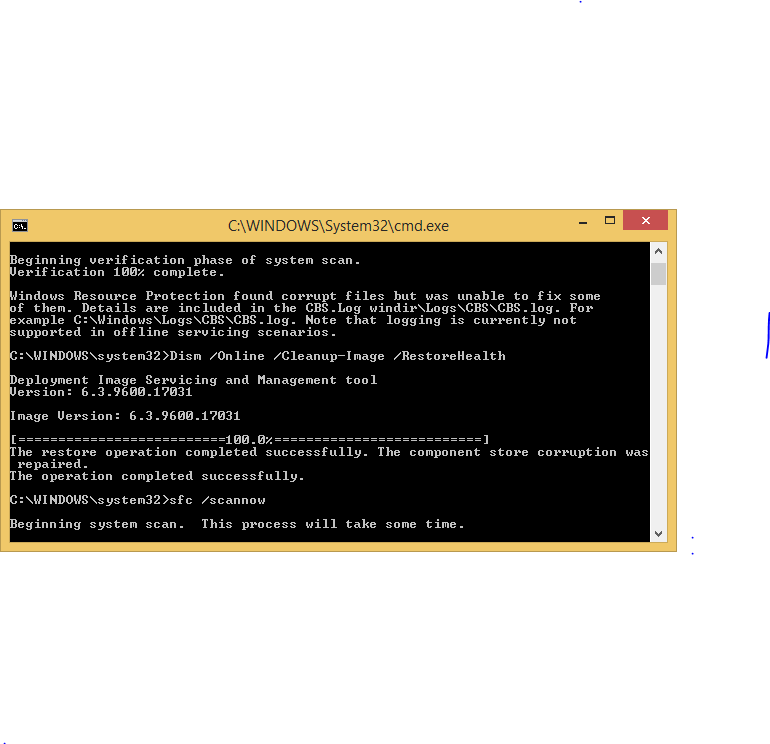 I wouldn't worry to much about it if you are not having any issues with your devices.


If not, then see if this may clear the dirty bit flag for the disk.

Restart the laptop. If chkdsk wants to run at boot when you restart the computer, go ahead and let it run and finish. Run another perfmon to see if the disk is still flagged dirty.

If not, then you could format the affected drive to clear it. Be sure to back up anything that you do not want to lose to another location first.

Well I finally got access the laptop with the dirty disk message again to try your suggestion above.

I decided to run the perfmon report first, and today this does not have the dirty disk warning.

I thought I would try running the fsutil scan anyway, but I don't think this worked. I hit the Windows key and R and typed in the command. A box flashed onscreen then disappeared. Do I have to use the Admin Command Prompt from the Windows and X key menu to run this command?

Or should I just wait and see if it ever happens again?

The more I get involved with the workings of the laptops the more I realise just what a good thing the hardware and software manufacturers are onto. These things are so complex it seems that the majority of users, who are not techie at all, will find it much easier to wait until something goes wrong then just discard them and buy new .

Yeah, you would need to run the command in an elevated command prompt instead.

If it's not showing as dirty in perfmon, then there's no need to run the command. I wouldn't worry about it unless it showed dirty again.

No point trying to fix something unless it's broken

Do you have anymore details that may help us help you with it?

When doing option one I get an error!

I get the error "When attempting to start the Data Collector Set the following system error occurred: Element not found 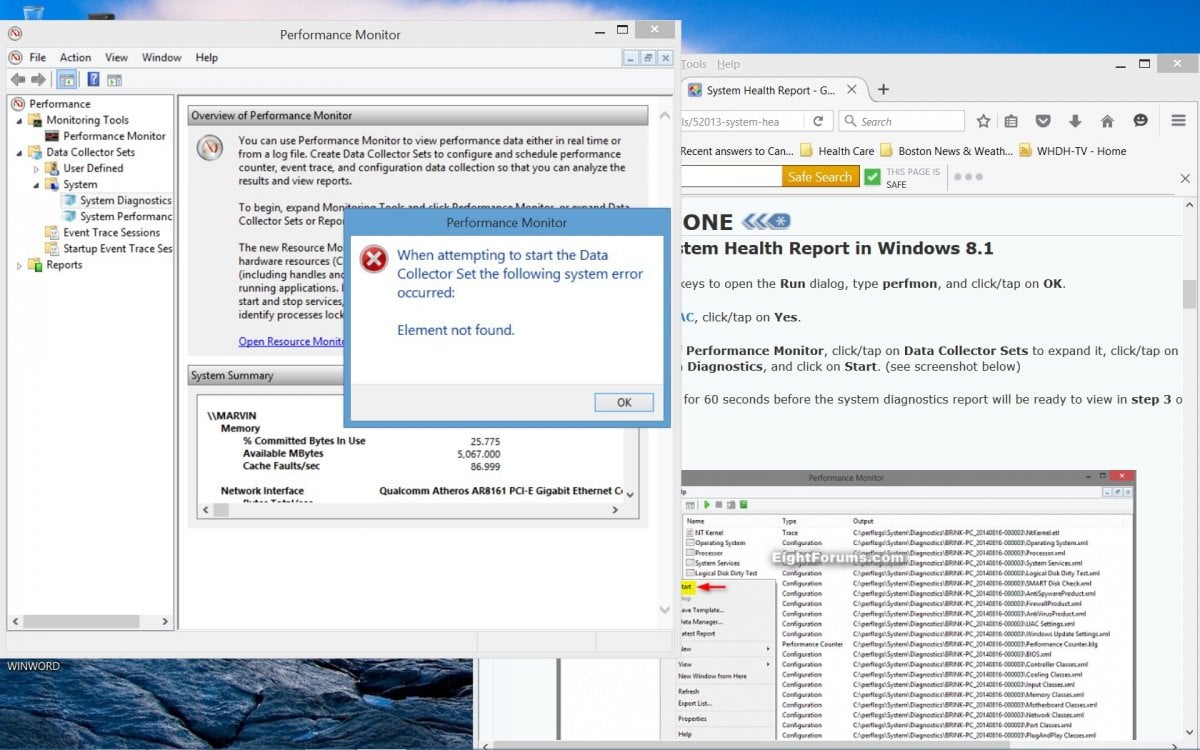