How to See Available Sleep States on Your Windows 8 PC​

Information
This tutorial will explain and show you how to see the available sleep states on your Windows 8, Windows RT, Windows 8.1, and Windows RT 8.1 PC.

Only states S1, S2, S3, and S4 are the sleeping states. A system in one of these states is not performing any computational tasks and appears to be off. Unlike a system in the shutdown state (S5), however, a sleeping system retains memory state, either in the hardware or on disk. The operating system need not be rebooted to return the computer to the working state.

Some devices can wake the system from a sleeping state when certain events occur, such as an incoming call to a modem. In addition, on some computers, an external indicator tells the user that the system is merely sleeping.

With each successive sleep state, from S1 to S4, more of the computer is shut down. All ACPI-compliant computers shut off their processor clocks at S1 and lose system hardware context at S4 (unless a hibernate file is written before shutdown), as listed in the sections below. Details of the intermediate sleep states can vary depending on how the manufacturer has designed the machine. For example, on some machines certain chips on the motherboard might lose power at S3, while on others such chips retain power until S4. Furthermore, some devices might be able to wake the system only from S1 and not from deeper sleep states.

State S4 has the following characteristics:
System Power State S5
In the S5, or shutdown, state, the machine has no memory state and is not performing any computational tasks. The only difference between states S4 and S5 is that the computer can restart from the hibernate file in state S4, while restarting from state S5 requires rebooting the system. State S5 has the following characteristics:
For more detailed information on system sleeping states, see:

Connected Standby brings the smartphone power model to the PC. It provides an instant on, instant off user experience that users have come to expect on their phone. And just like on the phone, Connected Standby enables the system to stay fresh, up-to-date, and reachable whenever a suitable network is available.

Connected Standby occurs when the system is powered on but the display is off. In this state, the device appears “off” until the user turns it back on. In Connected Standby, the system remains powered on and in the ACPI S0 state the entire time. Connect standby is neither a physical power state nor does it specify deterministic system or hardware power states. Instead it is a logical power state where the user considered the device to be “off” in a similar manner to how a smartphone functions.

Windows 8 supports Connected Standby on low-power PCs platforms that meet specific Windows Certification requirements. Systems that are not specifically designed for Connected Standby continue to use the traditional PC power model that is fully supported in Windows 8. Connected Standby is automatically disabled at runtime if any of the following hardware requirements are not met:
For more detailed information on connected standby, see:

​
powercfg -a​
3. You will now get a report showing you the sleep states that are available, not available, and not supported on your system.
NOTE: The results below are from a Windows 8.1 laptop and desktop. 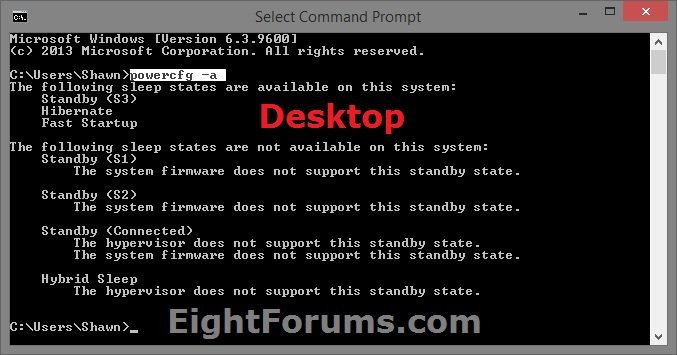 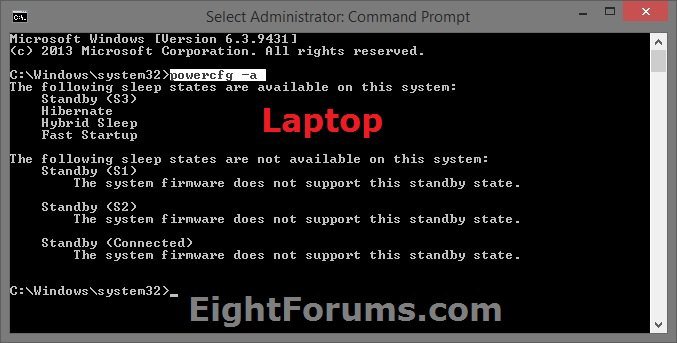 Another great tutorial! Learned quite a bit here