Self-renaming external HDD upon boot. How to stop it?

I have the following layout of internal and external drives in my desktop:

C: thru G: are internal drives, while I:, J:, N: and O: are external HDDs used for onsite backups.

Each drive also has BitLocker full disk encryption on.

The key to unlock each drive is stored on a USB stick that I plug into this computer upon boot.

So this setup works in 90% of the times. But once in awhile when I boot up, disk I: self-renames itself into some other letter. This doesn't happen to any other disk, but just that one:

So every time this happens I go to Computer -> right-click ->Manage, then in Computer Management -> System Tools -> Storage -> Disk Management, Then right-click that disk and pick "Change drive letter" and rename it back to I: 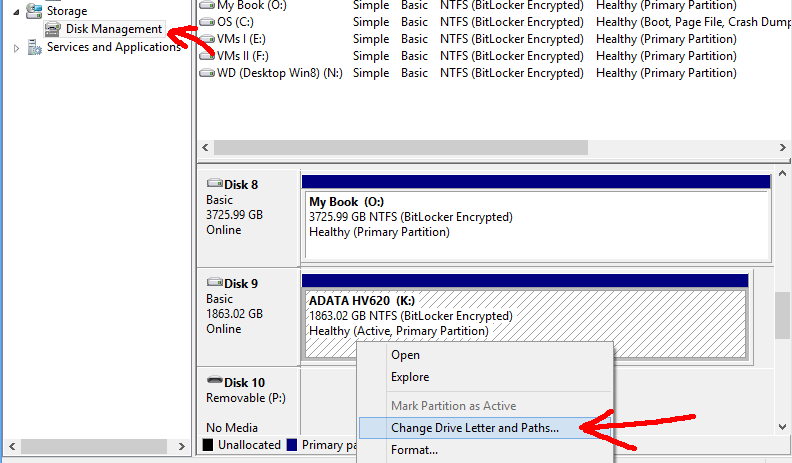 only for it to rename itself on its own upon some further reboot.

I would live with whatever letter it renames itself in, but the problem happens then with the backup and imaging software that starts failing nightly backups because of the bad path.

Is there a way to make this drive letter stick?

No, I didn't assign it any drive letters. It's just an external USB stick that comes out as soon as I'm done with it.

dc2000 said:
No, I didn't assign it any drive letters. It's just an external USB stick that comes out as soon as I'm done with it.
Click to expand...

The reason I'm asking what drive letter Windows assigned to it and if you're inserting it in the same usb port every time -- it just might be getting the drive letter I from time to time.

But, just approaching it logically, wouldn't Windows see that the drive letter I: is already assigned to an existing drive and not use it? I mean, it's kinda obvious, right?