I can't get S.T.A.L.K.E.R Shadow of Chernobyl to work on windows 8.1 64-bit. When I installed the game (6 days ago) it worked fine. It worked without any issues for several days. Then today when I boot my machine and try to start the game, it doesn't start end show a dialogue box that says:

"The application is not compatible with the installed operation system. Please upgrade to Windows 98SE, Windows 2000 or better."

I have attached a screenshot.

1) Why does the game suddenly stop working?
2) How do I make the game work again?

I don't understand why it doesn't work anymore. It worked when I installed it. It worked after a reboot, and after then next reboot. Not it doesn't work. The only thing I have done since I last played the game on windows 8.1 64 bit, was to install new nvidia drivers 337.88 for my graphic card (uninstall old ones, reboot, install new ones, reboot). 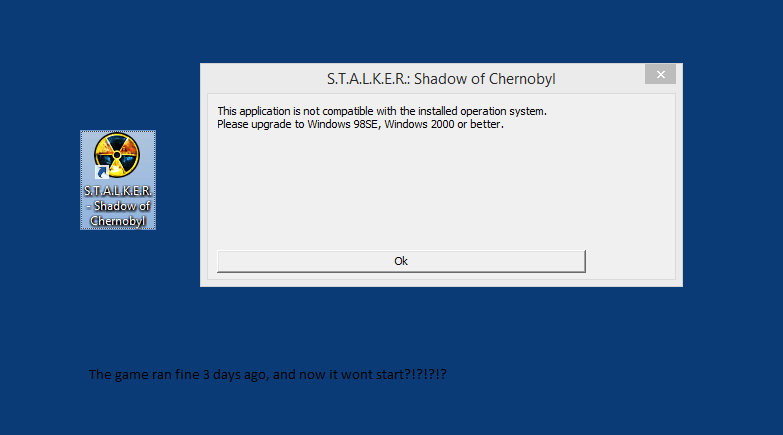 Here is a list of what I tried (in order) to try to solve the issue:

--
1) Reboot and try to restart S.T.A.L.K.E.R Shadow of Chernobyl (SoC).
2) Change compatibility settings for the program (tried all available (with/without admin) + reboot + restart SoC).
3) Tried to close down other programs etc.
4) Search the web like an idiot, where no one seemed to have my exact problem, and no solutions to similar problems seemed to solve my issue (note: I never tried to reinstall anything).
--

None of it worked. The only thing I had done since SoC last worked was reinstall graphic drivers + assign a keyboard shortcut to start my browser. So I continued with a more drastic approach:

==> I am not sure why SoC wasn't able to start, as described in my first post. I think it may have been caused by nvidia being set to 'Automatically apply optimal settings updates'. If anyone is in contact with nivida, will you pls inform them that this may be an issue with SoC + Windows 8. <==

If anyone has information about what caused the issue, then pls reply.

According to MS, the game is compatible with 8.1...

Not sure why your copy stopped working because according to Microsoft's compatibility Center the game is compatible with 8.1 - Windows 8.1 compatibility for STALKER: Shadow of Chernobyl version 1

Out of curiosity I installed my retail copy on my 8.1 machine (click my system specs), patched it, and other than ramping up my GPU fan, the game is running without issue (for what little I checked).

BTW where did you get you game from? Perhaps something got corrupted and the games needs to be reinstalled.

I haven't made ANY changes to windows or S.T.A.L.K.E.R since my last post (except for a couple of save game files - but the game worked the day after I created the save game files).

Does anyone know what is going on here and how to fix it ?

sygnus21 wrote:
>according to Microsoft's compatibility Center the game is compatible with 8.1.

Microsoft says a lot of rubbish. The game IS compatible with windows 8.1 ... for 2 days. On my freshly installed windows 8.1. Every time I made any changes to windows 8.1 (or the applications/drivers), I rebooted several times, and verified that the game still worked (start game, load safe, play a while, create a safe file, reboot, etc). The game runs better (for the 2 days it works) than under any other windows I've tested on. But then it stops working, with most cryptic error message.

sygnus21 wrote:
>I installed my retail copy on my 8.1 machine (click my system specs), patched it,
>and other than ramping up my GPU fan, the game is running without issue

sygnus21 wrote:
>where did you get you game from? Perhaps something got corrupted and the games
>needs to be reinstalled.

It's obvious that something goes wrong ... after it has worked perfectly for 2 days. The game works fine all the time on my windows 98SE, windows xp (32 bit) and windows 7 (32 bit), although the game crashes a lot more often while playing on the older operating systems with different graphic cards/drivers. On windows 8.1 the game seems to never crash (with my hardware/drivers/os) but it becomes 'incompatible' after 2 days

Does anyone know why or have a solution to the problem ?

Just tried the game again (two days later) and it's still running without issue. Again, perhaps your game is corrupt? I note you quoted me on everything but my question as to where the game came from?

I just can't use this information. It doesn't solve any problems. The disc does not seem to be corrupt. Neither the DVD nor the hard disk. The DVD and the installed game works fine on my win98SE, winXP and win7 (So the DVD seems to be in perfect health). And the harddisk of the windows 8.1 pc also seems to be in perfect health (check disk = 0 errors).

>I note you quoted me on everything

I do this to make it clear what I am responding to. Unambiguously. In the old days of the internet, people always did this. This enables you to see exactly what I reply to.

If you reboot, the game usually starts. Sometimes it emits the same warning. Because the game is copy protected, it's not legally possible to debug the binary, without circumventing the copy protection (I tried to debug it with windbg).

What seems strange, is that the error is not consistent. Either the game should NEVER start or it should ALWAYS start. It shouldn't toggle between these two modes at random.

I will try to get my windows 8.1 to work, but this is the last MS software I will ever buy. From now on, any new installations will be Linux or Unix. It's free, the support is better, and you have access to the source code, so you can fix the bugs yourself. Buying Windows 8.1 makes me feel like I got hustled.

Well, I don't have anything else to add.