For my case, i dont know what it is.. C:\Windows\system32\BSAppShlExt.dll.. Not sure if there will be any effect on the system if i disable it since it is system file..
Click to expand...

It does not matter if you disable it since this is a shell extension for your right click but I am not sure if this is a sytem file, I looked in mine and it's not there. Google it and I found this file belongs to a company called TODO in chinese. Maybe you should scan your PC with Malwarebytes Anti-Malware - Protect, Detect & Remove Malware From Your PC
Click to expand...

i already done full scan on my laptop when i have this problem.. thought it must be some virus that make it slow.. but i guess i over-trust built-in window's AV to scan for malware too.. thank you for ur suggestion... =) will do that later..

I made an account on this forum soley to thank you. Earlier I was on an uninstall crusade, uninstalling programs left and right trying to find the source of my 5+ second desktop right-click lag. I ran MBAM and MS defender scans too. Nothing worked, but your solution did. Thanks a ton.

Thank you for the :thumb:. Glad you got it sorted.

Many thanks to topgundcp. Followed your instructions and found out it was Deskscapes. All fixed now and a very happy man.

I made an account on this forum soley to thank you. Earlier I was on an uninstall crusade, uninstalling programs left and right trying to find the source of my 5+ second desktop right-click lag. I ran MBAM and MS defender scans too. Nothing worked, but your solution did. Thanks a ton.
Click to expand...

Same, thanks topgun, it was indeed the Atheros for me too, sorry for the necro, just noticed the dates

Wow! Thank You, I just registered on the forum to post my Thank You, this works beautifully! Keep up the Good Work!!

Hi,
Great forum for win 8 users.
I too had the same problem with right click context menu taking more than 10 seconds. Tried the ShellEx view. Though it reduced the items in the menu but didnot sort the problem.
Noted on this thread some where that Bluetooth device fwas a probable suspect.
Disabled the bluetooth from the context menu from Shellex view but still nothing happened.
Finally disbled the blue tooth device it from the device manager. It worked.

Worked for me. I joined this forum just to say thanks. So: Thanks a million

In my case the ofender was "AnyToISO"

Again, just joined to say thank you for this. I have a new PC, and noticed this right click problem (was taking about 2 seconds).

I downloaded and used ShellExView, and the problem was Ad-Aware Shell Extension.

Recently (late November, 2015), topgundcp suggested ShellExView to solve a serious problem I was having with Windows 10 File Explorer. Every time I right clicked on a file or folder in File Explorer, the system simply responded by closing FE. Thus, the context menu was completely unavailable for file and folder actions. I downloaded the tiny program (in about ten seconds) and ran it immediately. It found tons of third party program extensions. I perused the results and disabled a number of entries. Viola! (pronounced "wal-la") my File Explorer problems were over!!!

This is a pesky problem that I've been dealing with for over a month. No other forum has been of any help -- only Topgun. My hat's off to you, dude. You RULE!

Hi there, having the same issue with a .wav file i exported from FL studio. no problems form the program up until this point after following norepi's instructions for ShellExView, and when i try to test if the issue was resolved, i get this: 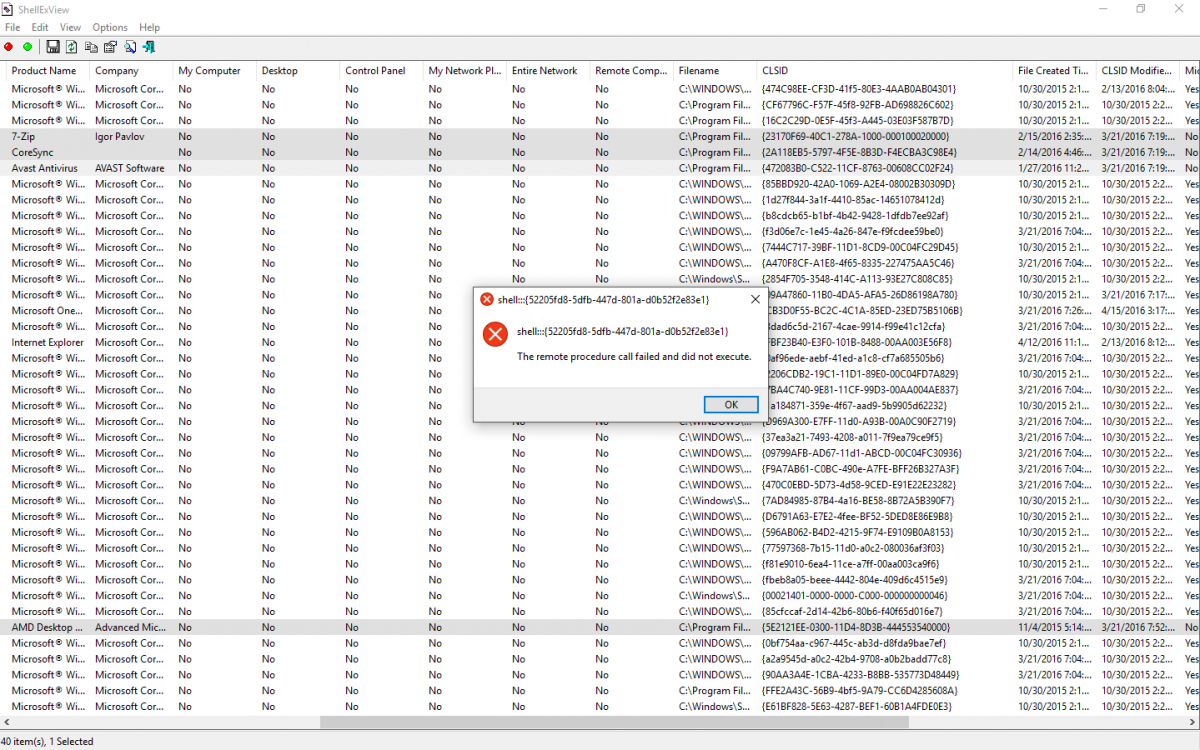 And now i'm at a loss.
windows explore still restarts, and it's ONLY the .WAV file that triggers it
Last edited: Apr 15, 2016

I did try this method, but after I enable the apps again, the problem is still there. It does work after disabling it though.

had the same issue on Windows 10, turns out it was an extension from AVG...

Just registered to let people who came here via google know that for me the culprit was "Shell extensions for sharing".

Thanks a lot topgundcp
[FONT=&quot] ! Even after all this time your solution worked for me (Windows 10) Problem caused by Nvidia Driver update on june 7 2016.

Thanks a lot topgundcp. I've also joined mainly to thank you for this solution.
I've recently been given an AMD PC with Win 8 Pro installed, Office 2007 and Sophos virus protection.
There are only 2 non-Microsoft extensions and the culprit was the Sophos components for extending windows shell with SAV scan version 10.7.2.49

As soon as this was disabled File Explorer started working better.
The green ribbon still takers time
The left column of folders does not open quickly
Images in the thumbnails do not appear quickly
Not good enough yet.

I have discovered a solution to my problems on the Microsoft website:

MTCSLtd started on May 6, 2016
[h=4]Discussion [/h][h=3]Slow Green progress bar in File Explorer - possible solution[/h]I've had a problem with File Explorer since upgrading to Windows 10, where I get a green progress bar that crawls along slowly, delaying the results of folder display such as the Download and Documents folders. It could take up to a minute before the folders would display.
I tried many different things as possible solutions that I'd found when searching the web:

Nothing worked for me.
I then thought perhaps there's a problem with the indexing. I was about to rebuild the index under the control panel\Indexing\Advanced options, but by chance went into the Modify option which looks at indexed locations.
Here I noticed there were pointers to my D: drive to a series of folders which are not there any more. They appeared to be from an old user profile, with a comment beside them saying 'Unavailable'. I unticked these, clicked OK to save the changes, then restarted File Exlorer and found that I no longer get the slow green progress bar when I go into my Downloads and Documents folders.
I had upgraded to Windows 10 Pro x64 from Windows 8.1. I don't recall if I had this problem with Windows 8.1, but I think I probably did. Also, I used to re-direct my Documents and other personal folders to D\:username, but now I redirect them to D:\Users\username, and think somehow the old location was remembered by Search.
It worked for me. Hope it works for you.

MY REPLY
Thank you MTCSLtd,

I was recently given a Win 8 Pro PC by a friend who had cleaned it up leaving only Windows, Office 2007 and Sophos security.

File Manager was behaving infuriatingly and stopping me doing work.

After several modifications following advice forums this is the one that has done it.

Going into Control Panel\Indexing\Advanced options and then the Modify option showed that there were numerous, now non-existent indexing locations used previously by my friend.

I unticked these and chose the new location and all is well, including instant loading of thumbnails.

In my case it turned out to be the MSE context menu handler.

Performed many updates to the computer and this started to happen.

Though for a moment I may have caught a bug or even worse a Malware slowly taxing the computer's resources.

For weeks I have been investigating watched core temps, logged Ram and CPU; back checked the processes and looked for any start-up applications that may be over taxing to no avail.

I'm a safe Net surfer so I only used MSE for the longest time.

Decided to be a little more on the safe side and get an ANTI -Malware/Virus with Internet Security from "ESSET." "BTW, its very aggressive and seems to catch about everything; even devices on a network that produce suspicious activity."

Unfortunately still No change; in fact I beleive it got worse almost 30 sec lags in the menu load.

I finally had enough of the lag in that tab as it was starting to impact my productivity.

Read this thread; applied what I learned; Worked!

Just wanted to Note that if you install a third-party internet security/ anti-malware that the old doesn't always play nice with the new. "Re-Read the notes from ESSET and they recommend that you remove the old antivirus software." "I like to be redundant; even if its bypassed until executed."

If all else fails try that --> worked for me