How to Set Processor Affinity for an Application in Windows 8 and 8.1​


If the application and CPU supports Symmetric Multiprocessing (SMP) or HyperThreading (HT), then Windows will automatically adjust the application's usage of each processor core for the best performance. You will not gain much, if anything, from manually changing the processor affinity for these type of applications.

If you have more then one processor intensive applications running, then you could improve their performance by setting the processor affinity of their processes to run on a different core(s). This way they are not competing for the resources of the same core(s).

Note
It is NOT recommended to change the processor affinity for system processes. Doing so could reduce their performance or slow the system down.

The affinity changes you make to the current instance of an application or process are only temporary and not set permanently. Once you close the application or restart your system, the processor affinity of the application will automatically return back to the default of running on all available CPU cores.

To Set CPU Affinity of Process in Task Manager
​
1. Open the application (ex: CCleaner) that you want to change the processor affinity of.​
​
2. Open Task Manager with more details.​
​
3. If prompted by UAC, click/tap on Yes.​
​
4. In the Processes tab, right click on the application (ex: CCleaner64.exe) or process from step 1, and click/tap on Go to details. (see screenshot below)​
​ 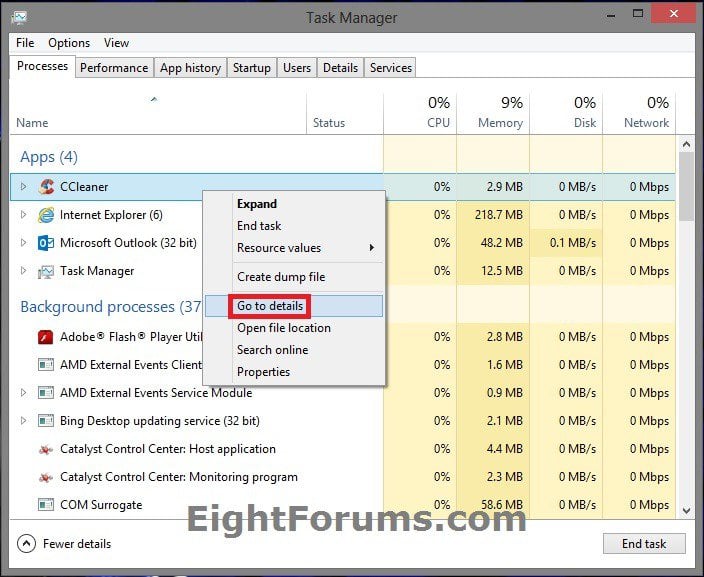 ​
​
5. In the Details tab, right click on the already highlighted name of the file (ex: CCleaner64.exe) for the process from step 4, and click/tap on Set affinity. (see screenshot below)​
NOTE: If Set Affinity is grayed out, then it means that the process cannot have the processor affinity set for.​
​ 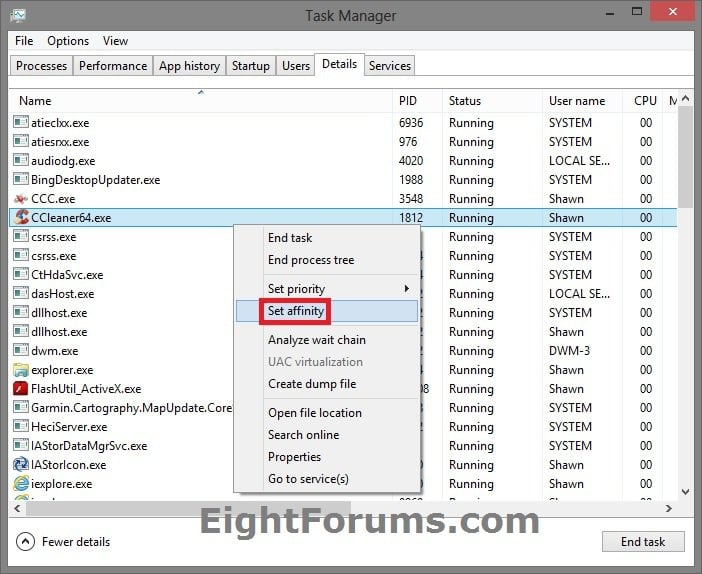 ​
​
6. Check (allow) or Uncheck (not allow) one or more CPU cores that you want to be allowed or not allowed to run the application on, then click/tap on OK. (see screenshot below)​
NOTE: Only the number of cores in your processor(s) will be available to set affinity to. CPU-0 = Core 1, CPU-1 = Core 2, etc... ​
​ 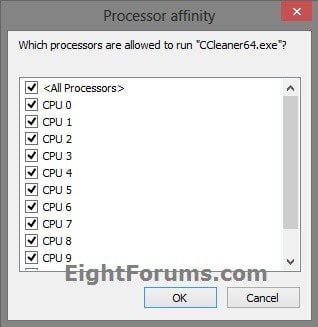 ​
​
7. Repeat for any other applications that you wish to change the processor affinity of.​
​
8. When finished, close Task Manager.​

To Run a Program with a Set CPU Affinity in Command Prompt
​
1. This step will show you how many CPU cores you have, and how to figure the hex value to use at step 3 below for the CPU(s) you want to run the application on.​
​
NOTE: If you should need any assistance with this step, then please feel free to post. I'll be happy to help.​
​
​
A) Open Task Manager (CTRL+Shift+ESC) in more details view, click/tap on the Details tab, right click or press and hold on any process in the Name column, and click/tap on Set affinity. (see screenshot below)​
​
NOTE: This will show you how many CPU cores you have. I have 12 CPU cores numbered from 0 to 11.​
​ 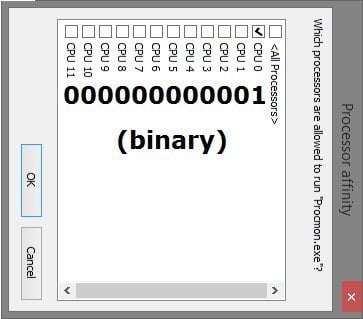 ​
​
D) Go the website below, and type your binary number from step 1C above into the Binary field. This will convert the binary number to a hexadecimal (hex) that you will need to use at step 3 below.​
​
Website: Binary/Decimal/Hexadecimal Converter​
​
For example, with my 000000000001 binary number, I get a hex value of 1. (see screenshot below)​
​ 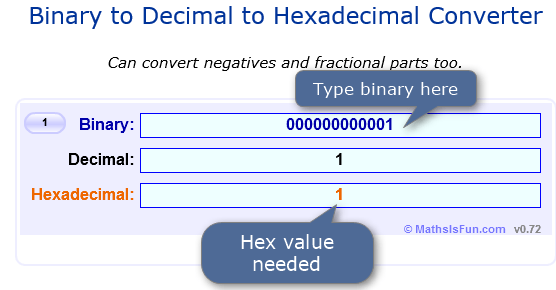 Note
Substitute Program Name in the command with the actual program's name within quotes.

thank you for this tutorial, it was a great help to me, today!!!

You're most welcome Elytherial. I'm glad it was able to help.