VIP Member
Pro User
I recently installed Office 2013 ProPlus (obtained legally through my company) and yesterday, saw a popup in the System Tray telling me that updates were available.

When I clicked it, nothing appeared to happen. So, I searched using IE and found Microsoft Update and installed it.

Then, I used the option to do an in-place Repair of Office 2013 -- which worked OK and then caused the System Tray popup to appear -- again. When I clicked it, nothing appeared to happen -- again.

So, I did an Online Repair of Office 2013 -- which is misnamed because what it actually did was reinstall it from scratch. Same System Tray popup, same no changes.

So, I started Windows Update, had it check for updates, and expected it to find Office 2013 updates, but it found nothing new.

In Win7, my Office 2010 gets updated through Windows Update. I don't have to do anything special.

Power User
Generally, you don't have to do anything special in Windows 8 either. Make sure Microsoft update is on (last checkbox here)

The Office 2013 updates are not distributed through Windows Update. When there are updates you will be notified through a message in the system tray. The message is just for information. The updates will install automatically. You cannot initiate it manually.

As far as I know there is no manual methode to check for Office updates. I've been using Office 2013 since the HUP launch early january this year. Since then I've tried searching for a way to manually check for updates but I haven't found any. So I gave up .

I guess the only thing you can do is to rely on the thought that everything will update in the background.

Power User
Der Snoober, your post puzzled me for а moment, because I do get updates via Microsoft Update per the option mentioned in the post #2. Then I remembered that there are two ways to install Office 2013: traditional and Click-to-Run. You and Mark Phelps probably have the latter, and that should solve the mystery
Last edited: May 31, 2013

The Office 2013 updates are not distributed through Windows Update.
Click to expand... 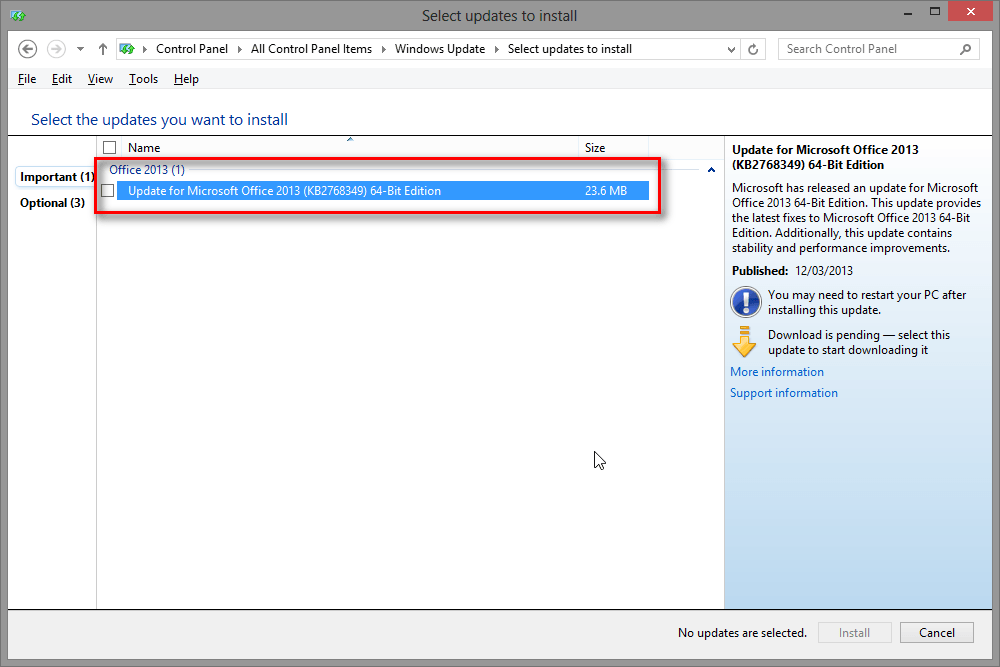 ​
Anyway, Mark have you checked that Windows Update is set up to receive Office updates? If it is you should see the highlighted text: 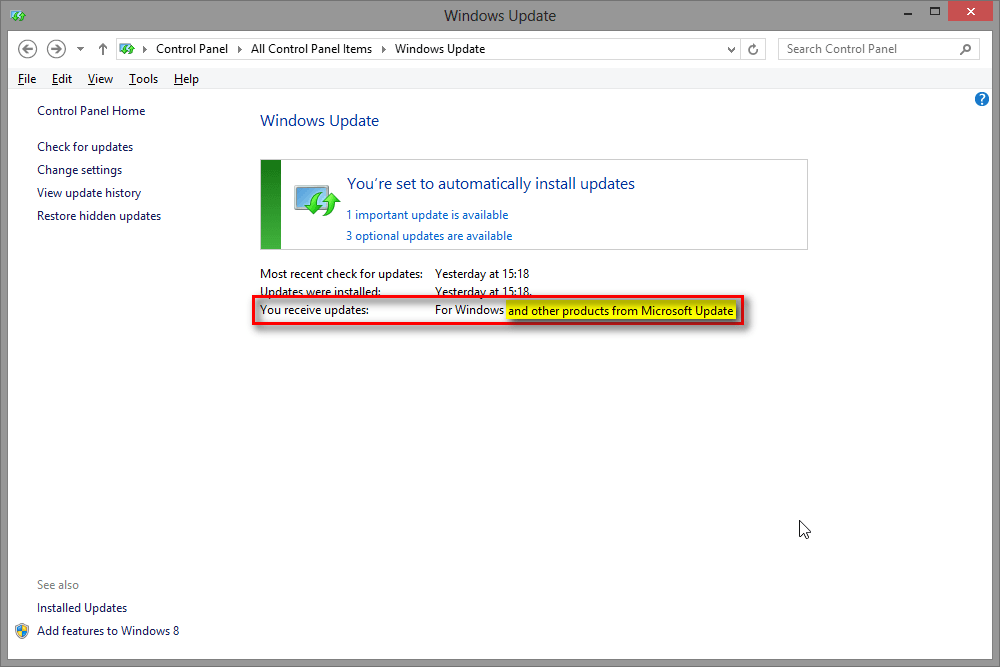 ​
If not, set Windows Update to receive Office updates: 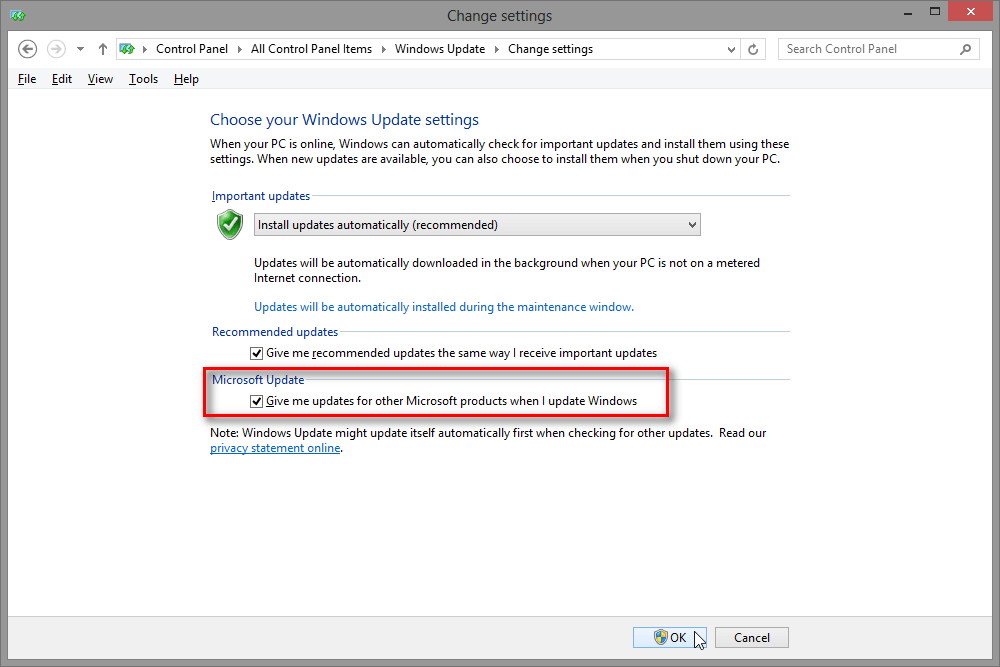 Per my explanation above:

VIP Member
Pro User
After doing some research, I discovered that my Office 2013 was evidently installed using Click-to-Run.

Maybe this is how ProPlus versions made available through the Home Use Program work.

I did notice that when the updates first appeared in the System Tray, and I clicked that, nothing appeared to happen. But evidently, updates are then installed in the background.

Also, I have checked all the box about updates, and in my case, Windows Update does NOT provide notifications of Office 2013 updates. But, from what has been said, that is probably a side effect of Click-to-Run.

Thanks for all the advice.

Power User
MSFT is trying to make the process of updating Windows and Office as unobtrusive as possible, and it's intereseting how we get concerned when we don't see traditional activity. Although, the pop-up about available updates without coherent response from the system sounds like not a good UX.

And I think you can mark the thread as solved at this point.

I also installed my Office via Click-To-Run. I have a Home Use Program Professional version. So that must be the reason why I don't recieve the updates through Windows Update.

Kari, I have the settings of Windows Update checked as you describe. So there must be two different ways 'in the market' for Office to update.

@Vadikan, no. The updates do not show in the update history.

Power User
@Der Snoober
Interesting. There should be some documentation on MSDN or TechNet, but meanwhile can you run this in PowerShell and see if Office updates show up there?

Vadikan, wow....that created a long list ! And this was my first ever time I've used the powershell . For work I do a lot of programming in Visual Basic for Applications and in SAS Base, so I think I do quite understand the things you've let me type.

Back to the point now. I've checked the entire list and the only Office updates I did encouter where updates for Office 2010. Which I've had installed on this pc until I moved to Office 2013 early January this year.

There is NO record of any Office 2013 updates.

Thanks for checking. I'm glad you tried PS

Probably, somebody familiar with App-V would have a better idea of the process.

Hmmmm, I've quickly read the links you've posted. At first it made me wonder weather or not I do have a Click-To-Run installation. So I did some digging.

I have a full copy of Office Professional Plus installed here. It's the business version that comes through the Home Use Program. In the Office programs, say for instance Outlook or Excel, I can look up the "product information". Here I have an option to enable/disable Office updates. There is also some reference to the updates. After clicking for more information I'm being redirected to this site: Microsoft Office 2013 Click-to-Run virtualization

Thanks for the extra information you've provided!

Here is an interestion article of Technet which explains how Click-To-Run actually works.
Overview of Click-to-Run

So this is not 'in the cloud' software. Just another way to distribute the software. Fjieuw... .

Actually, NO, they do NOT show up in the history at all.

Maybe that's yet another side-effect of Click-to-run.

Power User
I've found the description of the App-V update process. Basically, the update takes place on the management server, and then the difference between the application packages on the server and the client is streamed to the client.

Since update installation doesn't actually occur on the client, they don't show up in local Windows/Microsoft update lists.

Mark, I think you can mark this thread as solved now.