How to Change the Network Connection Priority in Vista, Windows 7, and Windows 8​

This tutorial will show you how to change the priority of network connections in Vista, Windows 7, or Windows 8 so that they follow a specific connection order set by you for all users.

1. Do step 2 or 3 below for how you would like to open the Network and Sharing Center.

2. Open the Control Panel in Vista (classic view), Windows 7 (icons view), or Windows 8 (icons view), click/tap on the Network and Sharing Center icon, and go to step 4 below.

3. On your desktop, right click or press and hold on the Network icon in the taskbar notification area, click/tap on Open Network and Sharing Center, and go to step 4 below. (see screenshot below)

​
4. Click/tap on the Change adapter settings (Windows 7/8) or Manage network connections (Vista) link on the left side in Network and Sharing Center. (see screenshots below) 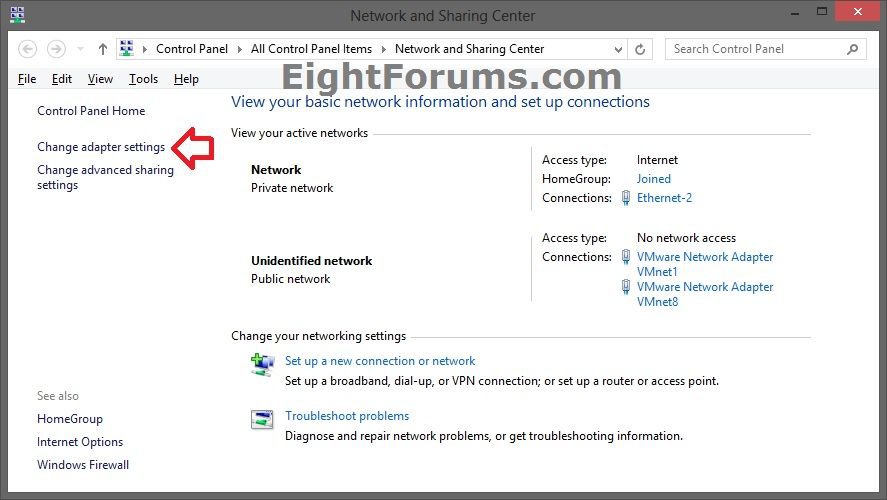 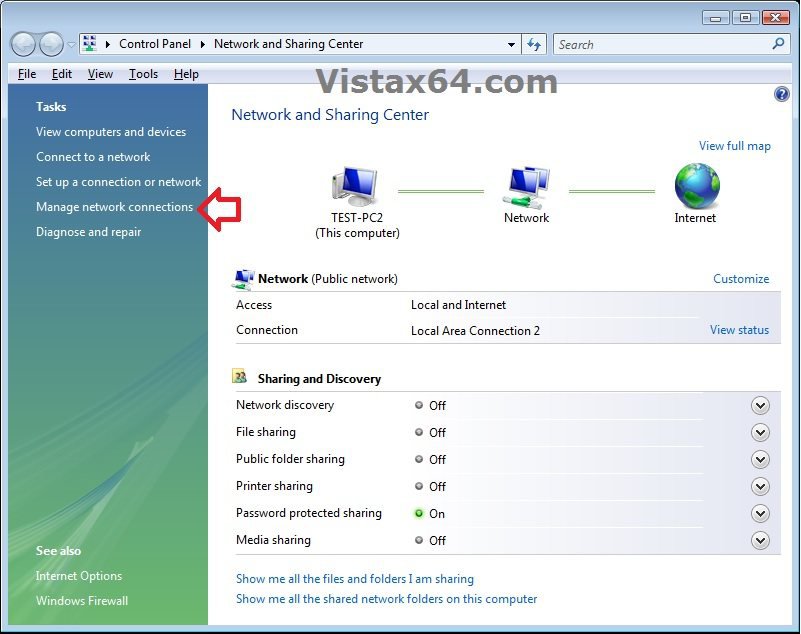 ​
5. Press the Alt key to see the menu bar, then click/tap on Advanced and Advanced Settings. (see screenshot below) 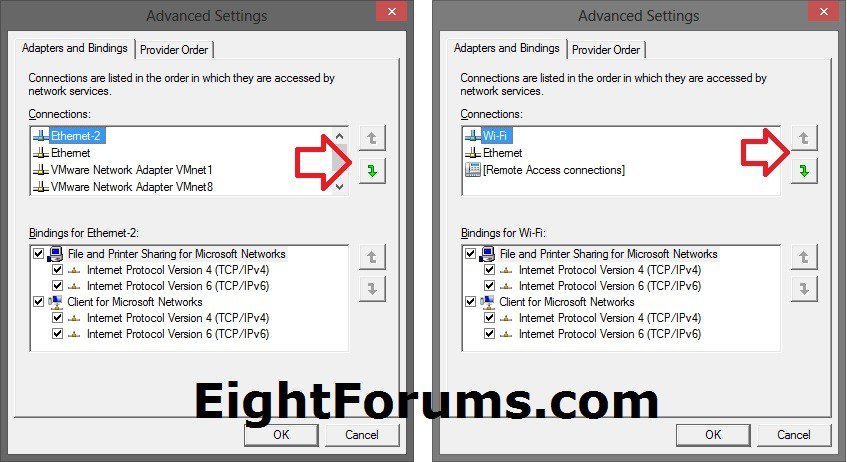 ​
8. You can now close the "Network Connections" and "Network and Sharing Center" windows if you like.

In many instances, especially on Windows 8 machine, the above steps are simply not enough.

For my settings to work, after I had followed the above steps, I had to do the below additional steps, and everything worked like a charm:

That's a link to the Microsoft Community, which I found and that ended up working for my scenario.

An explanation of the Automatic Metric feature for Internet Protocol routes
Click to expand...

Hi Brink, I have a new laptop running Windows 8.1 64bit, which I was setting up at my office, which has a NAS server with two printers shared on the server. However I can only connect to the server via a LAN cable. The server has an older internet connection that is also shared on it, but that is VERY SLOW.

Then we have a Wi-Fi connection in the office, which I am logged on to, so I have both the LAN cable and my Wi-Fi switched on at the same time, so that I access the server via LAN cable for all files and info, and then for anything related to the internet the machine uses the faster Wi-Fi connection.

Only reason why we were not able to share the faster internet connection on the server, is because we have not yet figured out how to configure the new NAS server, and pairing it up to the new faster ADSL connection.

So the whole trying to prioritise the use of both connections, was just a matter of temporarily sorting the whole situation out. It is going to unfortunately take some time and maybe hiring a specialist to come and resolve our connectivity issues, also because our office is using both Apple Mac and Windows based machines.

Coincidentally, there is also another laptop in the office that was running Windows 8.1 even before I bought my current laptop, and they are also having the same issue with prioritising the connection on their machine.

The funny part is that my older laptop, which was running Windows 7 Ultimate 64bit, did not need any additional settings after the same steps in your original tutorial were followed. It (my Windows 7 laptop) automatically prioritised the Wi-Fi internet connection, over the LAN's internet connection.

I hope that clarifies a little bit more.
Last edited by a moderator: Jan 28, 2018

Is it possible to have everything connected to a wireless router to be able to only have that one connection to it wirelessly? This way the router can act as your main access point.

Brink said:
Is it possible to have everything connected to a wireless router to be able to only have that one connection to it wirelessly? This way the router can act as your main access point.
Click to expand...

That was most certainly the intention when we upgraded our server to the NAS server, and subsequently added the faster ADSL connection. And the practicality of the situation is that due to file sizes that we all use or access from the MAC & Windows machines, having everything accessed via LAN cables ensures that reliability of not having any issues when working on these files on the server. Wireless can get a bit iffy to say the least.

And on top of that, our printers in the office are only accessible via LAN cables, due to not having any WiFi functionality on them.

So the goal is still to figure out how to get the new ADSL line, to work with the NAS server, along with everything else that we need to access on the server.

You could also connect a LAN switch to the router to connect PCs to the switch when they are farther from the router, or just run out of Ethernet ports to connect to on the router.