MS: get your act together

This is a pointless thread, as far as getting results from MS, but after downloading Office 2013 I'm really ticked about where this company is going with its products. I like Office 2013 - seriously - and hate Metro. Some people are the opposite, some like both, some hate both. I'm not typing this to rag on any particular category of people, not doing this to change minds. Everyone here pretty much knows who likes what. What I'm emphasizing is that a great deal of frustration comes from not being able to figure stuff out initially. Don't want to get into the weeds of that with Metro. Again, I'm only mentioning this because, despite the many counter-arguments to the Not Intuitive charge, it doesn't change the fact that 8 is simply not intuitive. If it were, that video with the guy's dad wouldn't have spread like wildfire, you wouldn't be reading complaint after complaint after complaint about it and, most obviously, the counter-arguments wouldn't exist because there would be no need for them. Does a company really want millions of people sitting in front of a screen with its brand new flagship software installed and have them say - what the hell am I supposed to do with this? I don't care if you think those people are idiots. They're doing this, so what's the best way to prevent it?

Latest example: trying to install SkyDrive for Office 2013 is a royal pain. It should be a piece of cake. It's not. And I can't even believe I'm saying this because I've had a SkyDrive account for a while. Haven't used it much, never used it with Office 2010 because I hadn't felt a need to use it.

When I set up Office 2013, I didn't do the SkyDrive account initally. Little box said something like - that's ok, you can do it later. Later eventually arrived and I went to the revamped File screen, clicked "Share" (to me, this is a dumb way to say what you're doing here. Off the top of my head I don't know what could replace it but "Share" is too coy for the job, like it's saying - SkyDrive might be in here, tee-hee-hee! You share with others, not yourself) and got this, of course: 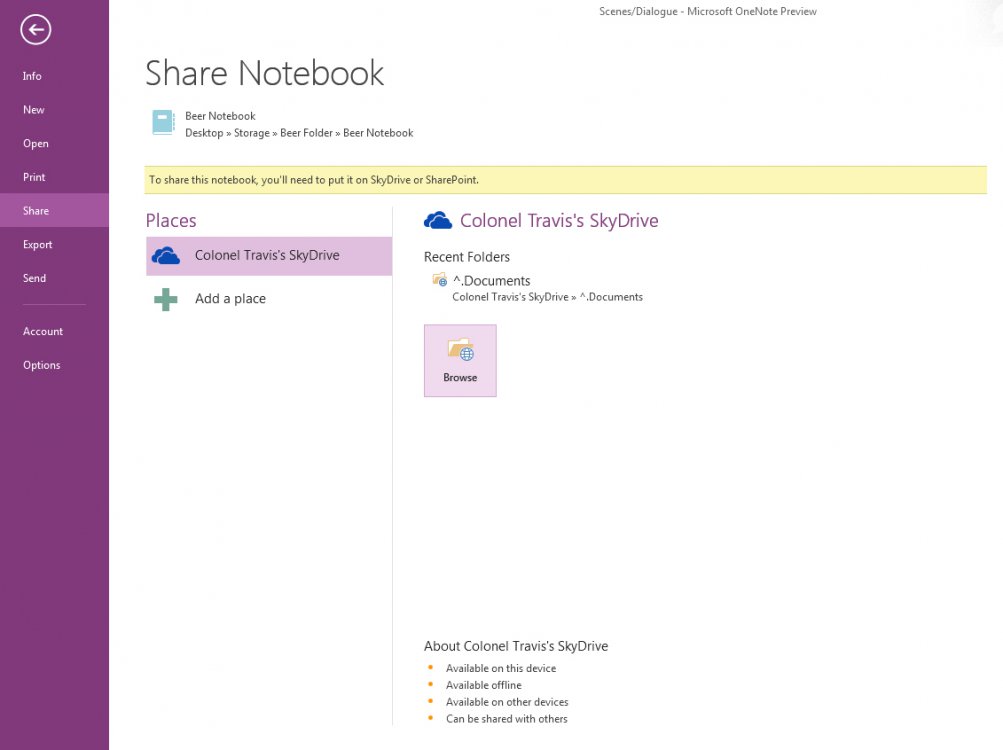 So how do you save your work to SkyDrive via this screen? Click "Add a place"? Nope. Says I'm already connected because I had signed into SkyDrive. Can't remember what I clicked to do that, maybe it was that button, I don't know, which is ridiculous on my end. Nonetheless, what do I do after that? Click that Browse folder? Nope. That's not a browsing folder, it's a moving folder. But you don't know that until you click around and find a file that, presumably, might save to SkyDrive some day but who the hell knows, it's not clear what you're doing. Ultimately, when you select a file - in a window titled "Move Notebook" although you can't even select a full notebook, you have to select a file - it says you already have that file, would you like to replace? I'm sorry, WTF are you talking about? What am I moving and why? What about clicking the Documents purple bar under "Recent Folders"? Hahaha! Are you nuts? Same result as the attempt before it.

I go to my SkyDrive account online. OneNote says I'm already connected to SkyDrive but I have to type in the login information again and then I find that SkyDrive has nothing in my folders. I kinda got the impression my OneNote folders were connected because it said I was connected? Ah, no. You're thinking too normally here. You need to get in a more convoluted idiot frame of mind and try the official MS Office 2013 site. I could find the Higgs boson by myself, no particle accelerator and with four of my five senses crippled faster than I could find anything about anything on any MS site.

I check around the web - nothing. Finally I find something that said you need to install the SkyDrive app on your computer. Der duh. Having hardly used it this never crossed my mind. So I load it on my PC and SIGN INTO SKYDRIVE A THIRD TIME EVEN THOUGH I NEVER LOGGED OUT THE OTHER TWO TIMES and after that, problem solved.

This, ladies and gentlemen, is @#$%! stupid. What I'm typing now took longer than what I went through, but it was a total waste of my time and frustrating. For people who aren't really into computers, I can't imagine what it will be like for them when they start using all this new software for the first time.

Who is in charge of this company? My guess is everyone. That's best way to kill simplicity. I get the impression that all these MS people make their stuff a certain way because they think - let's do this because people will like it. And everyone else nods their heads and some guy claps softly. Then someone else says something and the process repeats until everyone has said something and then they shove all those somethings into 100 million lines of code in the shape of a 325 pound defensive tackle who wants you nowhere near the goal line.

Pro User
Gold Member
Well, I would suggest that it's a beta software, issues are SUPPOSED to happen, you're supposed to get frustrated, send a frown, and probably by the final release your issue will be fixed. Actually, good idea, see a little sad face? Copy your issue and send it to Microsoft. Best method.

To try to help, did you have Office 2010 previously installed with a Windows Live account associated with it? That could be the reason why you see that. Also, instead of going to Share to save it to SkyDrive and troubleshooting it there, go to Account and see if you have your SkyDrive linked up under Connected Services. If it is, then go up to User Information and your user account should be there. Remove it, then re-login.

To save to SkyDrive, for some reason it's tedious, but you need to already have folder structure going before hand. I guess in your situation, it should be easier to just mange your SkyDrive from Office, but you need to manage SkyDrive in SkyDrive, like SkyDrive for Windows, within Windows Live, or the SkyDrive app. That should probably help....

I know it's a beta, Cokey, I should have said that I factored that in there, because I do keep that in mind. I just think that the problems are deeper than what I would consider beta bugs. The solutions you suggested are great, and thanks by the way, but to do basic stuff like that should be brainless, and MS should follow KISS as much as they can is all I'm saying.

Pro User
Gold Member
That's what Microsoft is trying to do. So far, it's been pretty brainless for me. Everything has been working pretty great.

Right, but we all have different abilities, interests, intelligence, etc. That's why I can't come down too hard on, not just people frustrated with 8 but people frustrated with computers or anything else. They don't get into it like you and me, and I don't even get into it that much, but I'd say more than the average person. It's like someone into hardcore car restoration. My father in law is so into cars it's insane. We went to a huge car show one time and he was telling me about carburetors and paint colors and windshield curvature and how the 1956 whatever-the-hell has different tail lights than the 1957 model, and he's buying us stuff to clean the bumper on our own cars, stuff to clean the dash, etc. And I'm thinking - I really don't give a $#!% about clean bumpers or any of this other stuff. All I care about is if it gets me where I'm going and gets me back. And all over this country there are car people who cannot come close to understanding why I don't share their enthusiasm.

While we're at it, I do enjoy me a very clean and detailed car.

I agree it could say that the client isn't installed, and that would be a good step. Or it could offer to install it, but then people might accuse MS of trying to force people to use their software.

The fact is, this software is complex and has thousands of features.. some of them will not be as thoroughly implemented as others. All we can do is complain and maybe they will be improved. If not very many complain, then maybe it's just a few people having problems, or it's a not well used feature.

I know, I know, you don't think this is progress, and maybe it's not.. MS has made errors in judgement before, but they corrected them in the next version. Remember "smart" menus? The concept behind it was sound, but the implementation ended up being less than ideal.

I enjoys myself some clean windows on my car.

Pro User
Gold Member
I love me detailed tires on my car.

Mystere said:
While I agree with you to a great extent, one also has to realize that you're doing a fairly advanced function. Cloud drives are not for grandma and grampa. This is something technically savvy people use, and technically savvy people generally understand that in order to use a service, you have to first install the client for it.
Click to expand...

Past Office iterations I'd agree right back. But by default, everything in this version saves to the cloud. They are pushing you there whether you like it or not. If they're gonna do that, then they don't need to make it stupidly complicated.

Obviously it does NOT save to the cloud by default.

Mystere said:
Umm.. How exactly can it save to the cloud by default if the cloud isn't configured by default?

Obviously it does NOT save to the cloud by default.
Click to expand...

It does if you don't sign in with a Windows Live account. It does when you do, it defaults the location to your SkyDrive, but can easily change it just as well.

It is natural to have some caution about those kind of things - never been seen before and could literally result in death - many early attempts were fatal.

Nothing whatsoever to do with Metro or any other gui.

The complete opposite is true.

If it not hazardous ( and even sometimes if it is ) - there is a strong tendency for people to want new things and experiences.

Our entire Western economy is based on it.

VIP Member
This works well for linking to Skydrive: Sync Any Folder to Your SkyDrive Account | PCWorld for all except User shell folders, which need to be moved to Skydrive folder according to User Folders - Change Default Location