I came across a couple of threads on other message boards about people having problems with this update. From what I've seen so far, it seems to affect Windows 7, but I have seen one post referencing a problem updating Microsoft Office 2013 after installing this update on a Windows 8 computer, and someone else mentioned not being able to install any other updates after installing this one.

The message boards indicated that Microsoft has pulled this update.

I uninstalled it on my computer, since I figured if Microsoft had pulled the update, a better version would come out later. I then checked for updates, and this one is still showing up as being available. Apparently it has not been pulled for Windows 8.

Is anyone here having any issues after having installed this?

I hadn't seen any problems after installing it, maybe it is OK on Windows 8? I wasn't offered updates for my Microsoft Office 2013, so I don't know if the update would have affected that or not. I never do see updates for that within Windows update anyway.

Have had it installed since 12/9 and have not had any issues that seem to have cropped up according to Google search on the KB.

No errors, no nothing. Windows still working like it should be. 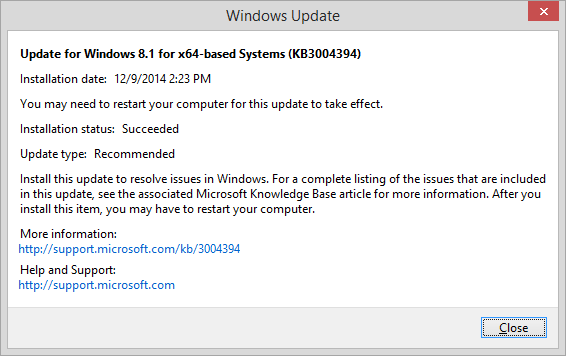 I run Microsoft Money 2003 on 8.1. It was fine until December 2014 updates. When I first tried to run Money after the updates it crashed and would not run. The Computer would not shut down and I had to force it (Hold in power button). It corrupted Money and I had to reload it. I found by trial and error that if I removed KB3004394 then Money would run and if I removed Money I could install KB3004394 without problems. They would not and still will not run together - Money crashes and the computer will not shut down and after a restart Money is corrupted. Anyone else seen this and is there a known solution