Solved Hyper V and VMWare on the same machine

It actually IS a violation of the EULA. Please do not shoot the messenger, I don't want to be a killjoy, just telling that Windows EULA is quite clear:

How can I use the software?

We do not sell our software or your copy of it – we only license it. Under our license, we grant you the right to install and run that one copy on one computer (the licensed computer), for use by one person at a time, but only if you comply with all the terms of this agreement. Typically, this means you can install one copy of the software on a personal computer and then you can use the software on that computer. The software is not licensed to be used as server software or for commercial hosting - so you may not make the software available for simultaneous use by multiple users over a network. For more information on multiple user scenarios and virtualization, see the Additional Terms.
Click to expand...

Thanks Kari, that was my feeling and I am going to use the boot menu selection as suggested by Adam. Now once I get around to it I'll have to create some Hyper V machines and download a few too.

Indianatone said:
You know how it goes, just want to CoverMyA as they say. Don't want my key blocked for miss use.
Click to expand...

I've never had a key blocked for running Windows like this -- you also won't even have to activate more than the original time - you are running on the SAME machine with IDENTICAL hardware.

As I said -- is it illegal to SWAP HDD's and run windows -- absolutely not --if it were I don't know how many people would be running Windows illegally --what about all those swapping HDD's for SSD's. !!

If you really want to be 100% CERTAIN then run Windows ONLY from an HDD (or better) connected via an external e_sata port - simply switch to the HDD/SSD you want to run from at boot time and wipe any Windows 8.1 installations off your purely INTERNAL HDD's.

If I'm fitting a new SSD / HDD to a computer I certainly want to see if it works before deleting the OLD installation - so there's nothing "irregular" about booting up the SAME windows from another HDD to see if it works and if it doesn't re-boot again from the old HDD until you've sorted the problem out.

Running multiple concurrent copies on Virtual machines DOES count as DIFFERENT MACHINES - you need a license for each concurrent instance of windows you boot up. However it's perfectly legal to have several DIFFERENT VM configurations under a SINGLE license so long as only ONE of these is ever running at one time. (If the virtual hardware is very different then you will have to re-activate again - however minor changes in VM configurations don't usually require a re-activation of Windows).

If you have access to a University / college or Work program you might be able to get a Multiple activation version of Windows - that should ease any lingering doubts as you could then run as many as the multiple activation system allows -- probably somewhere between 100 and 1000 copies. !!!! Should be enough even for the most avid tester,

No Jimbo, I can't get accesses to cheap / free software any more. When I was working we could enter contest and complete Windows tests to get to buy Ultimate 7 for $15 and even win Office 2007 (I did) and also get discounts on Technet but now I am disabled due to heart issues I am no longer working so what I have got I need to keep.

I've made a simple tool to put a really quick one-click GUI over this bcdedit procedure, Hyper-V Switch. You can get it on GitHub:

GitHub - ygoe/HyperVSwitch: Hyper-V Switch – A simple GUI to enable or disable Hyper-V without uninstallation, allowing the use of other virtualisation solutions.
Last edited: Jan 5, 2017

adamf said:
... if Hyper V is installed then VirtualBox or VMWare will not work. You get a message VT-x is not available (as Hyper-V is using it)...
Click to expand...

See the screenshot below, installing Windows 7 Pro Finnish in a VirtualBox vm, at the same time Windows 7 Pro English running on Hyper-V:

View attachment 45176
​
VirtualBox and Hyper-V have no issues running on the same machine, not even when run simultaneously.

How did you do this? Is it possible to do so on Win 8.1 / Server 2012 R2? If so in what order/ sequence as my Hyper V role is installed so VMWare Setup wont install. Thoughts?

Right, it is possible to run other VMs while Hyper-V is active. But all in software only. There will be no hardware acceleration for the other guests. Which is required to run 64-bit guests. VMware Workstation will tell you about this when you try.

LonelyPixel said:
Right, it is possible to run other VMs while Hyper-V is active. But all in software only. There will be no hardware acceleration for the other guests. Which is required to run 64-bit guests. VMware Workstation will tell you about this when you try.
Click to expand...

VirtualBox can be used alongside Hyper-V, but only for 32 bit guests. To use VMware (or VirtualBox for 64 bit guests) and Hyper-V on same machine, you need to do as told in this thread, to create a boot entry for both Hypervisor off and on. Detailed instructions: Creating a "no hypervisor" boot entry | Ben Armstrong’s Virtualization Blog

In screenshot below my Windows 10 boot menu. I can select if I want to boot with Hypervisor ON and use Hyper-V, or Hypervisor OFF and use VMware: 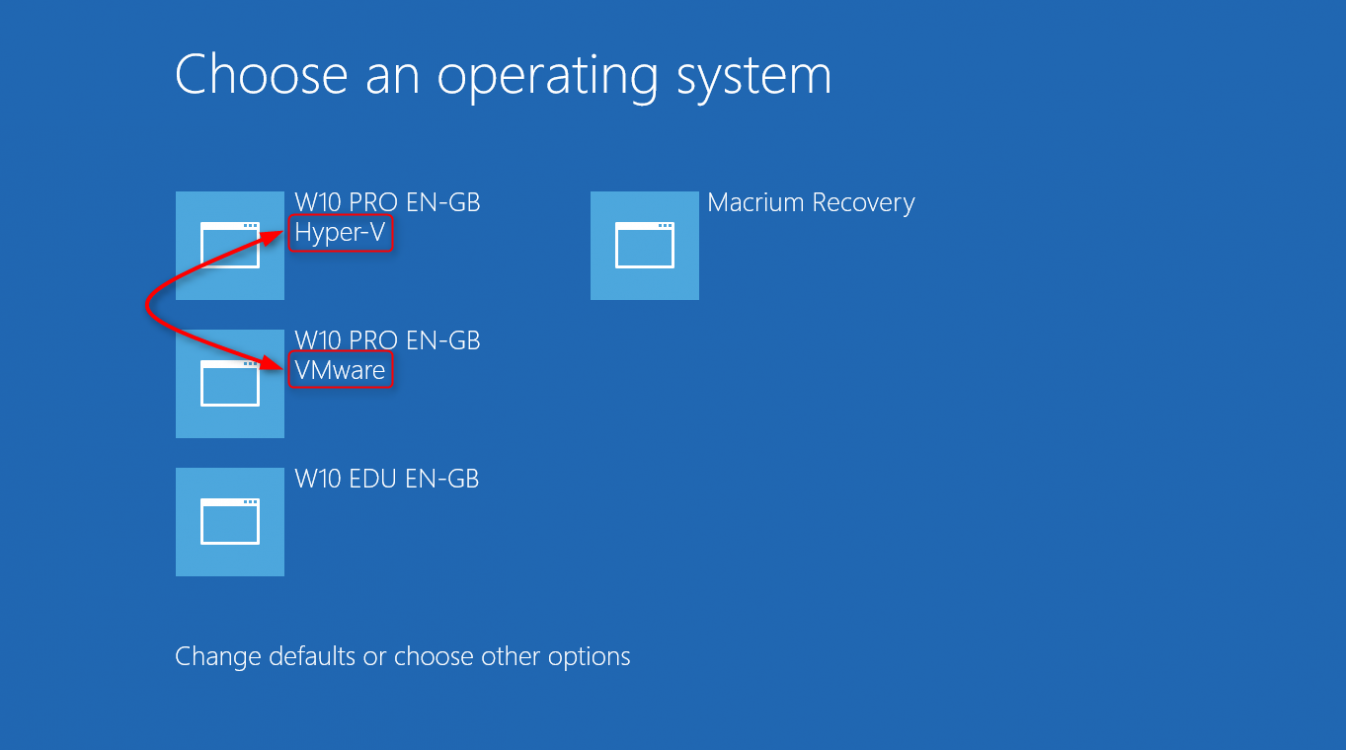 Kari said:
To use VMware (or VirtualBox for 64 bit guests) and Hyper-V on same machine, you need to do as told in this thread, to create a boot entry for both Hypervisor off and on.
Click to expand...

Or use my tool, Hyper-V Switch, see above.