When you right click on a photo and go to Properties -> Details , there is a link at the bottom called Remove Properties and Personal Information that will remove the camera EXIF data, GPS location and other metadata.

I took a photo on my iPad and emailed that picture to my Windows 8 laptop. The photo contains personal information including my GPS location that I want to remove. When I try to remove it I get an error message saying File Access Denied....You need permission to perform this action. I'm the only user on this laptop...I'm the Administrator. I have Full Control over this file in permissions. I even added the Take Ownership thing to the right click menu and tried that, but it still wouldn't allow me to remove the personal information from the photo. 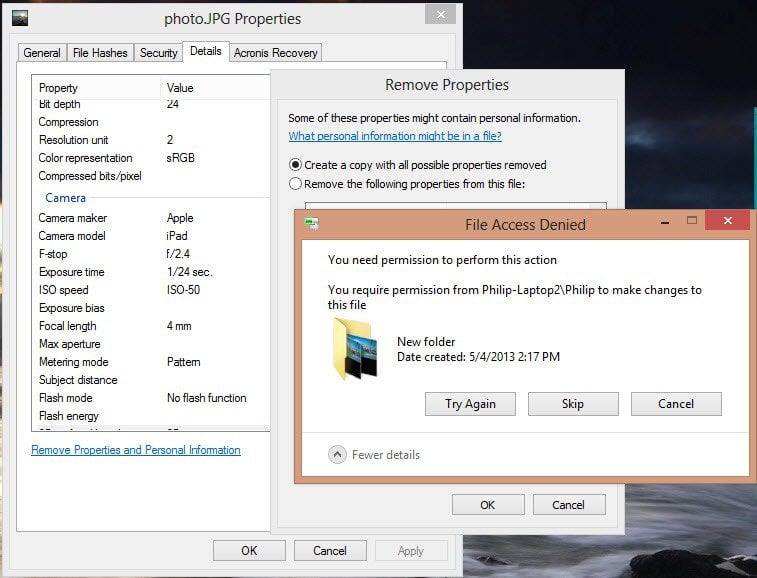 Sort by date Sort by votes
A

Power User
I just downloaded an iPad sample photo from The Verge to try and I get the same “File Access Denied” error as you.

Looking on the Microsoft site they say “If you added properties using a program other than Windows, you should remove those properties using that program. The Remove Properties dialog box removes properties that were added using Windows, but it might not be able to remove all properties added by some programs”.

So, it seems that for whatever reason Windows is unable to remove image metadata created by Apple devices. Therefore, unless someone else can come up with a work-a-round, I think you'll either have to use Apple software, or resort to using third party software to remove it.

If you have Photoshop it’ll give you the option to remove Metadata when you save for web and device. If you don’t have access to Photoshop, then your guess is as good as mine as I haven’t personally used any Metadata removal software. Google search brings up a few, but I don't know which ones are trustworthy or any good.

Personally, I'd probably try something like Faststone Image Viewer, as it has the option to remove Metadata and it’s software that’s well known and has been around a while. According to the version history, in 2007 they “Added ‘Remove JPEG Metadata’ to Tools menu. It allows you to remove metadata such as EXIF, IPTC, embedded thumbnails etc from jpeg files”.

Alternatively, if it's only for a couple of images, you could convert them from a jpeg to a png, which should remove the EXIF data as png doesn't officially support metadata.

I don't have Photoshop. Converting to PNG removes the metadata, but increases the file size a lot. I just tried FastStone Image Viewer, and it did have the option to remove the Metadata like you said. Looks like a pretty neat program!

If youre trying to alter a file through a network you may be denied, you may only have READ rights and not modify or delete.

Copy the file directly to your desktop or folder on your local machine and do it there..

Btw apple has a free app to remove exif from pictures and store them as a separate file from the original, which you can then use that to share or post.

Im not sure if this has been solved or not, but I just noticed you were using a program to alter a file and not Windows Explorer.

You should run that program (as administrator) that may fix your problem..

Im not sure if this has been solved or not, but I just noticed you were using a program to alter a file and not Windows Explorer.

You should run that program (as administrator) that may fix your problem..

This has been addressed previously on this forum, and on se7en forums as well as elsewhere. Check out this link http://www.eightforums.com/tutorials/2814-take-ownership-add-context-menu-windows-8-a.html for more info. If you install the take ownership right click context script into the registry you can then right click on any file or folder and take ownership which will grant you the ability to make any necessary changes. Use this sparingly however because enabling access to some files might increase vulnerability to malicious applications. Good luck.

I use for remove this error Permissions Time Machine v1.2 to restore default permissions to folder or files or registry keys
i download it from amyd projects blog

based on what arc1020 stated "If you added properties using a program other than Windows, you should remove those properties using that program. The Remove Properties dialog box removes properties that were added using Windows, but it might not be able to remove all properties added by some programs." wouldn't the easiest thing to do is to remove the personal data from the ipad file B4 sending or forwarding the file to someone else?