1. Start or restart your PC, and boot into Windows 7 or Vista. (see screenshot below) 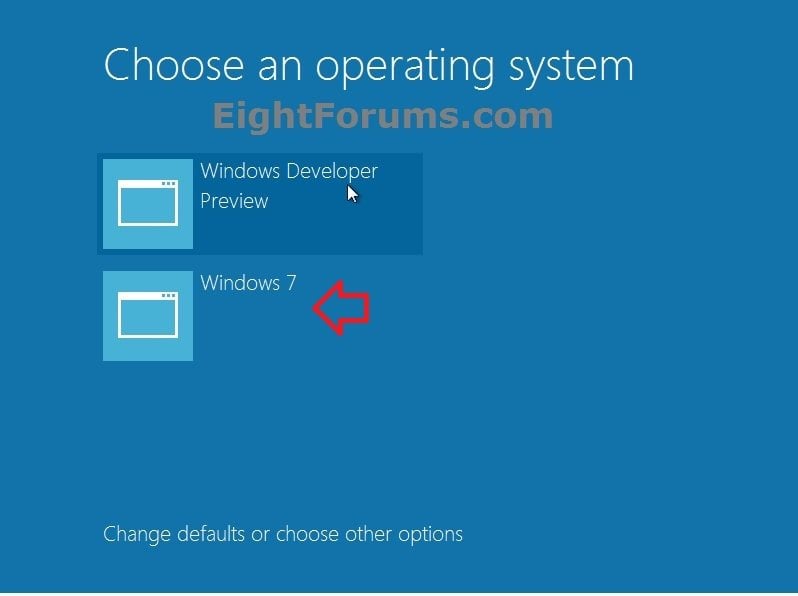 2. In Disk Management, delete the partition that you installed Windows 8 on so that is is now unallocated space. (see screenshots below) 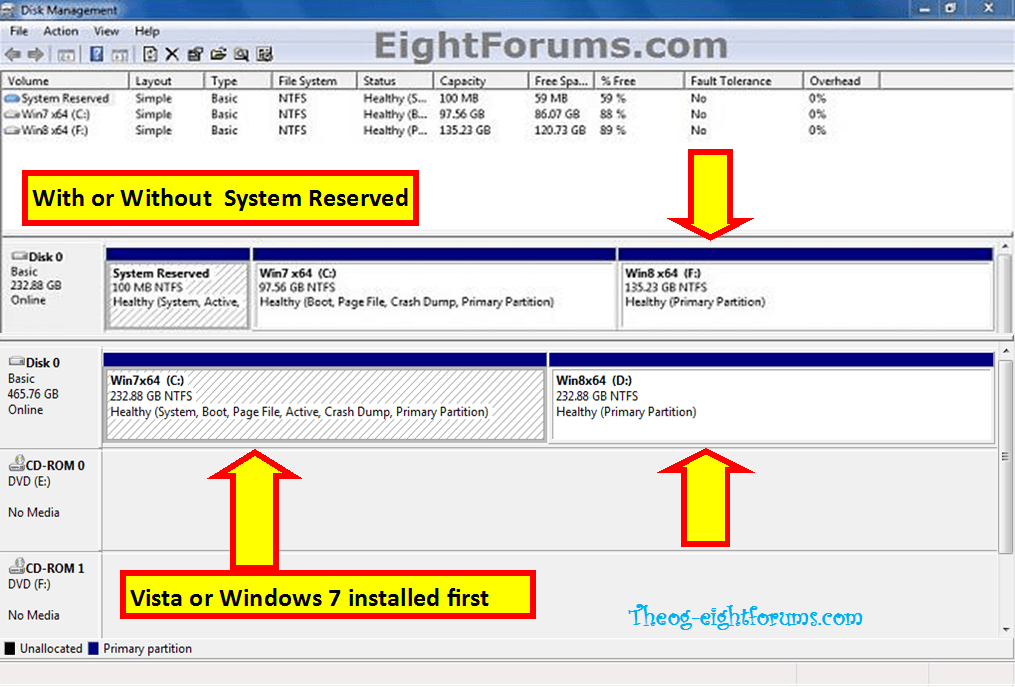 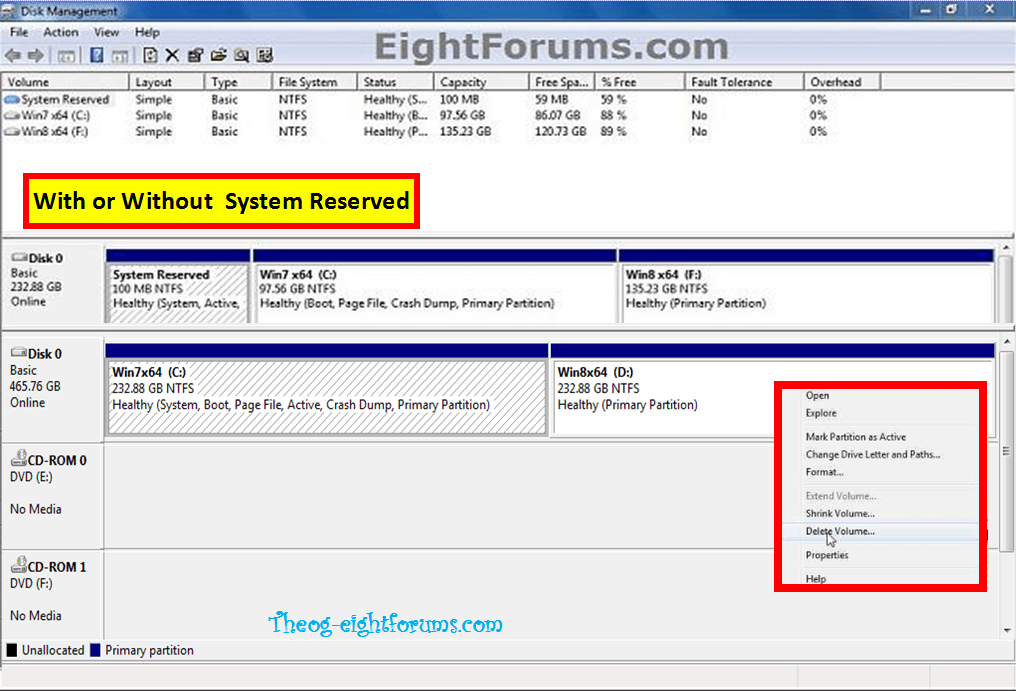 3. If you like, you could either create a new partition to use with the unallocated space, or extend the Windows 7 or Vista C: drive into the unallocated space to add it back to the C: partition. (see screenshot below)
NOTE: This will vary depending on how you have your hard drive setup though. 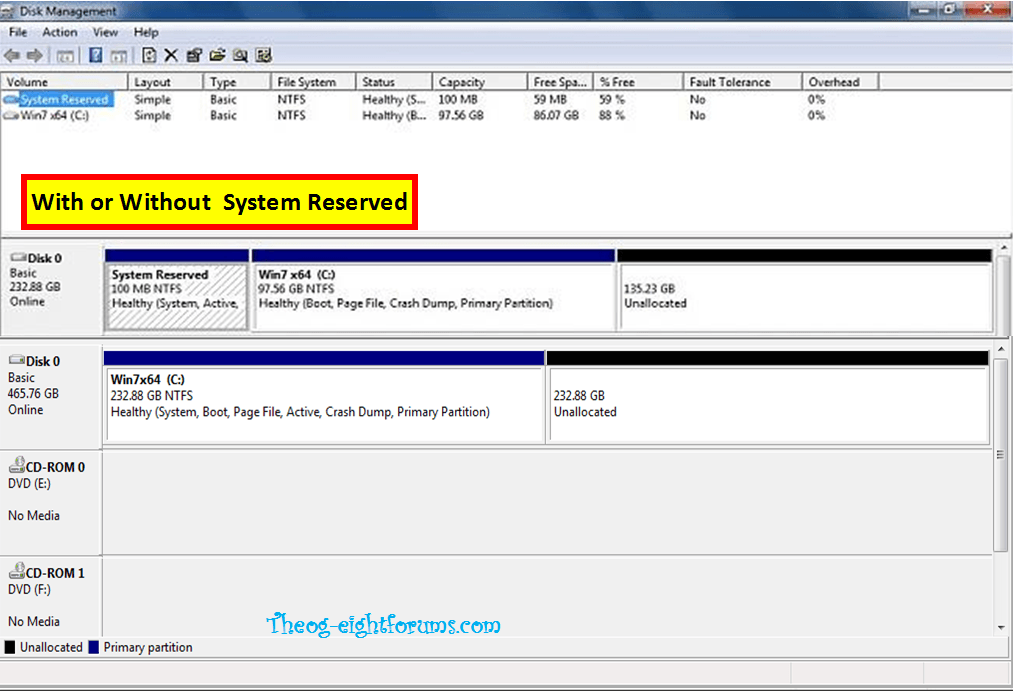 ​
4. When finished, restart your PC and only have Windows 7 or Vista installed and listed in the Windows Boot Manager screen.

When you have your Dual boot on a PC with a uEFI setup. 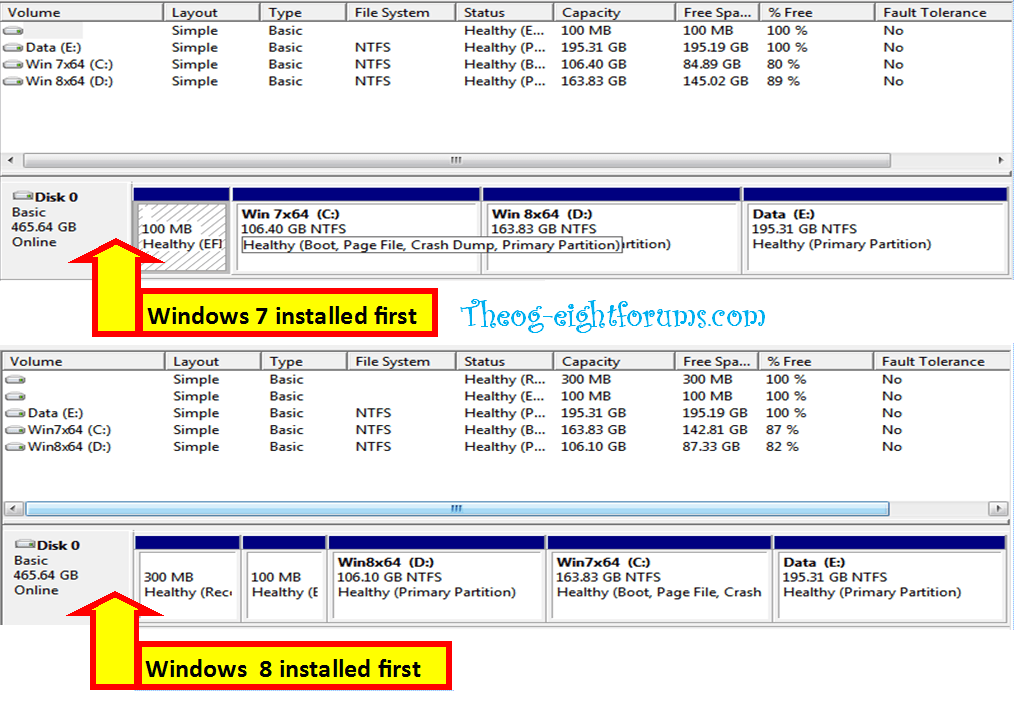 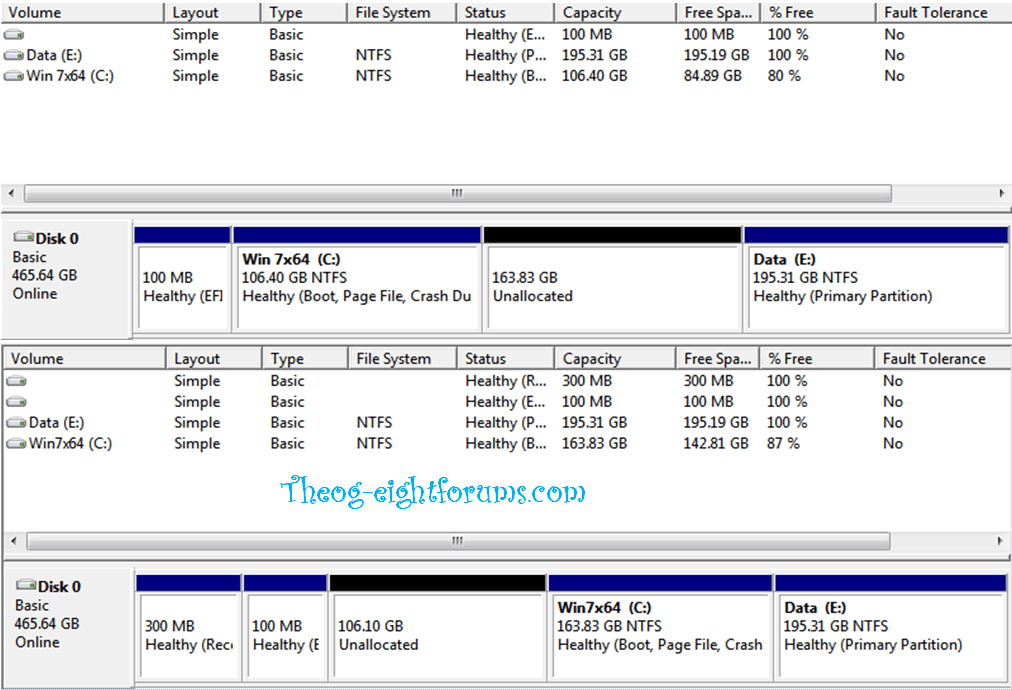 Scott001 said:
Hello.
I have a similar issue where it looks like the screen shot at the beginning of the thread. Only there are two windows 8 icons.
There is a short pause during boot up asking which version to boot to. (The default is installed correctly).
When I select the second version there is an error message that it hasn't installed correctly. This is the version I would like to remove.
I checked Disc Management as it has been previously suggested in the thread and there was only one partition on the drive and I can't see from this view what is installed on it.
Any suggestions how I can remove the version that hasn't been installed properly?
Thank you
Click to expand...

I don't know if anyone has had this situation before but I did the following:

I purchased a HP Envy 8-1414 with Windows 8 Pre-Installed. Even though I hated Windows 8 (no offense meant), I left it on the PC because I was using machine solely to run a MySQL database and operated from a separate machine running Window 7.

I no longer need the separate machine and want to phase it out. I still hate Windows 8 (no offense meant), and decided to save money and investigate a dual boot with Windows 7. After weeks of work with UEFI and USB bootable disks I got the dual boot to work.

I use Windows 7 at work and at home and I do not have, or want a touch screen monitor. I only did a dual boot instead of a clean install with Windows 7 because I didn't want to lose the machine though making a mistake.

It isn't a huge deal, I can continue to dual boot, but isn't possible to removed the OEM Window 8 that was preinstalled and make it a totally 7 PC? In otherwords, the reverse process??

Hello. I am attempting to delete Win8.1 from my dual boot system, but am having trouble.

First, I don't understand why in your example above Win7 partition is greyed out (with diagonal lines) when the goal is to delete Win8. I thought if one is trying to delete a partition that is the one that would be greyed out. Am I missing something?

Second, and more importantly, when I have attempted to delete my Win8 partition the "delete" option is greyed out, so I have been unable to do what I set out to do.

Here is a copy of my Disk Management information: 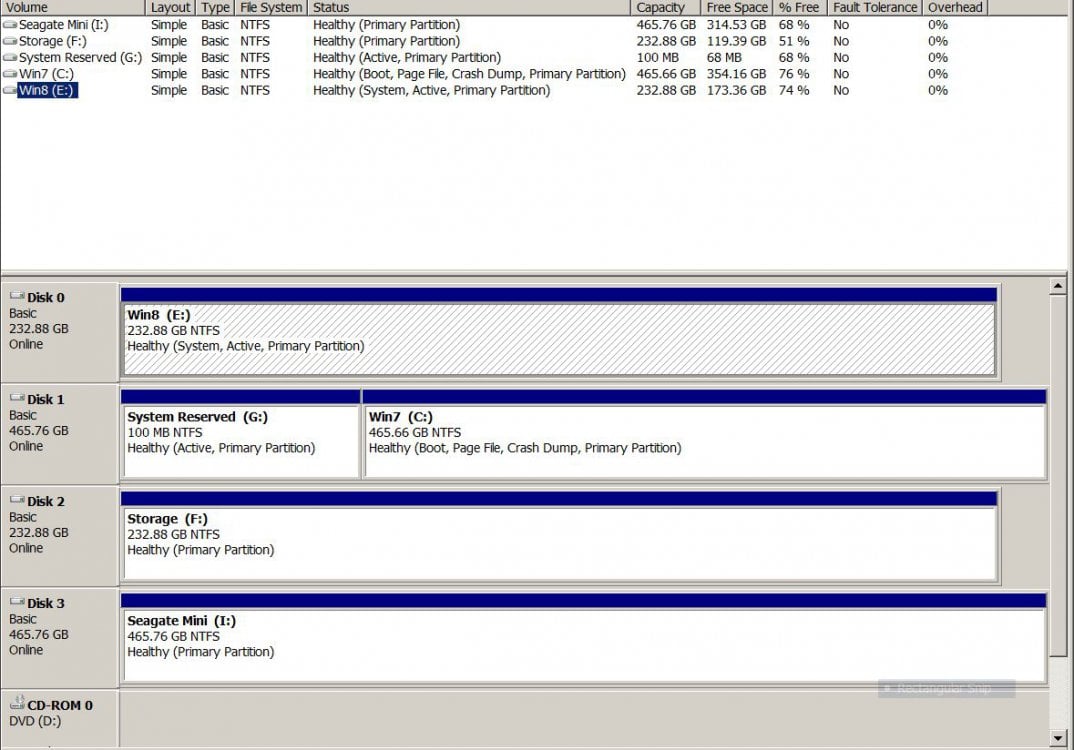 Update. I used EasyBCD to change my boot menu (How to Geek How to Uninstall or Remove Windows 8 From Your Dual-Boot Setup) so that I am now booting into Win7, but when I open disk management and try to delete the partition that holds Win8 I get the message, "Windows cannot delete the active system partition on this disk." How should I go about doing that so I can complete the job?

Incidentally - Excuse my impatience trying to roll back Win8, but my time is limited and I like to solve my own problems when I can.

cachry said:
How should I go about doing that so I can complete the job?
Click to expand...

If Windows 7 does not start. => How to fix the Windows 7/8/10 bootloader if the hard drive has an MBR (Master Boot Record) partition table. -> link

Okay, thanks for that information, but just how do I go about accomplishing that? I have to tell you I'm no tekkie.

When I restart my computer, Win7 comes up as I would want it to, so it does start (your Step 2).

Switch the data cables between the two motherboard HDD ports (Disk 0 and Disk 1).

And after that, if Windows 7 does not start. => link

Thanks for your response, but (since Win 7 now boots upon startup) I have some questions and possible other solutions:

1. What would happen if I simply formatted the disk holding Win8?
2. If I made the partition containing Win7 active -- and that containing Win8 inactive -- would that work? 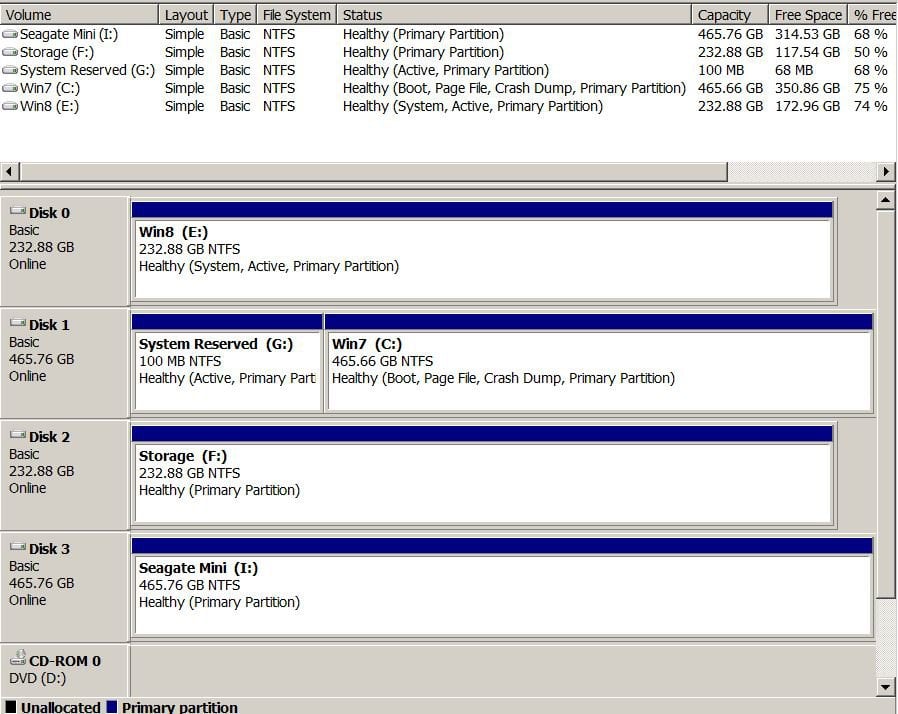 cachry said:
1. What would happen if I simply formatted the disk holding Win8?
Click to expand...

Windows 7 does not start.

Bottom line from a simple-minded standpoint is it's impossible to swap Disk 0 with Disk 1 (in the partition table) without making the hardware change . . . Is that right?

What I find most confusing is that Win8 was installed after Win7, and if so shouldn't Win7 be the system partition?

You can change the boot order of drives in your computer's BIOS.

I've done that before. So you think that would do it? It's much easier than pulling the case apart.

cachry said:
So you think that would do it?
Click to expand...

I'm sure you get tired of answering (what are for you) very basic questions, but you have been very helpful to me and I thank you for that. My computer is working as I had hoped, and is now ready for Win10.