How to Downgrade Windows 8 Preinstalled to Windows 7​

This tutorial will show you how to downgrade your Windows 8 Preinstalled with or without Secure Boot to Windows 7.

We always assume you have made your Factory Recovery Discs using the OEM manufacturer's Recovery Media Creator app the first day you had your new PC, and made a Startup Repair CD/DVD/USB.

Did you make the OEM manufacturer's Recovery Disks?

You can order OEM Recovery disks from your OEM manufacturer's website.

You can use the Windows system image.

If TRUE, your uEFI BIOS is set to Secure Boot, go to step 3 below.

If FALSE, your uEFI BIOS is not set to Secure Boot, NO need to reset uEFI BIOS. Go to step 4.

3) Reset BIOS to default, and reboot to BIOS make sure Secure Boot is disabled.
NOTE: Check your manufacturer's uEFI/BIOS firmware manual for settings.

Note
You may also need to
Make sure CSM is ENABLED, & set to UEFI boot.

On some OEM manufacturer's the CSM setting are 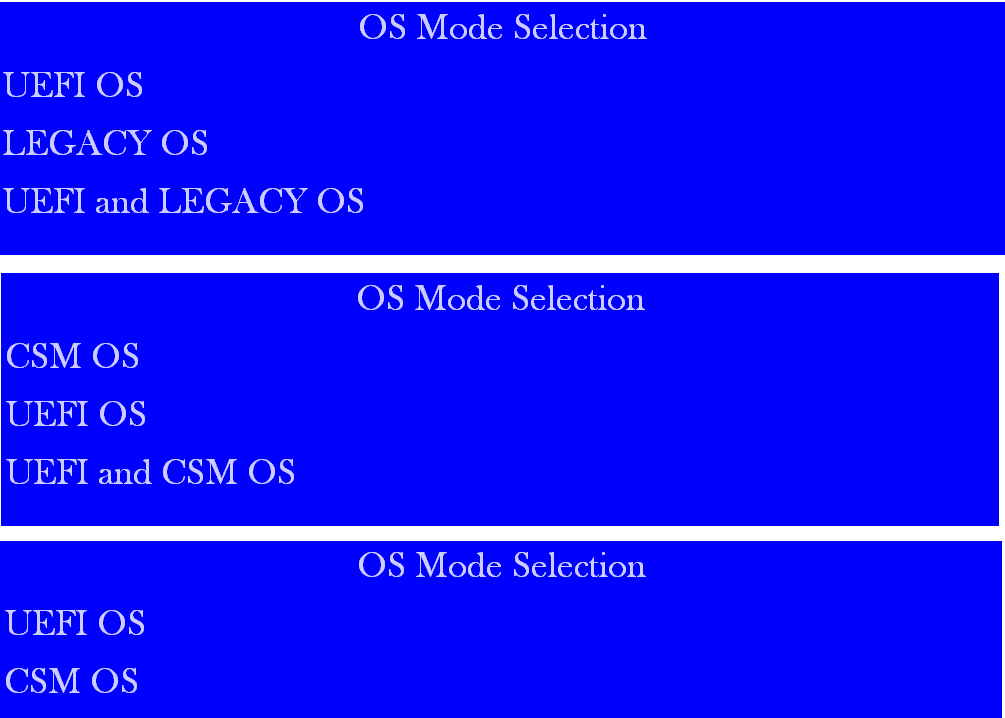 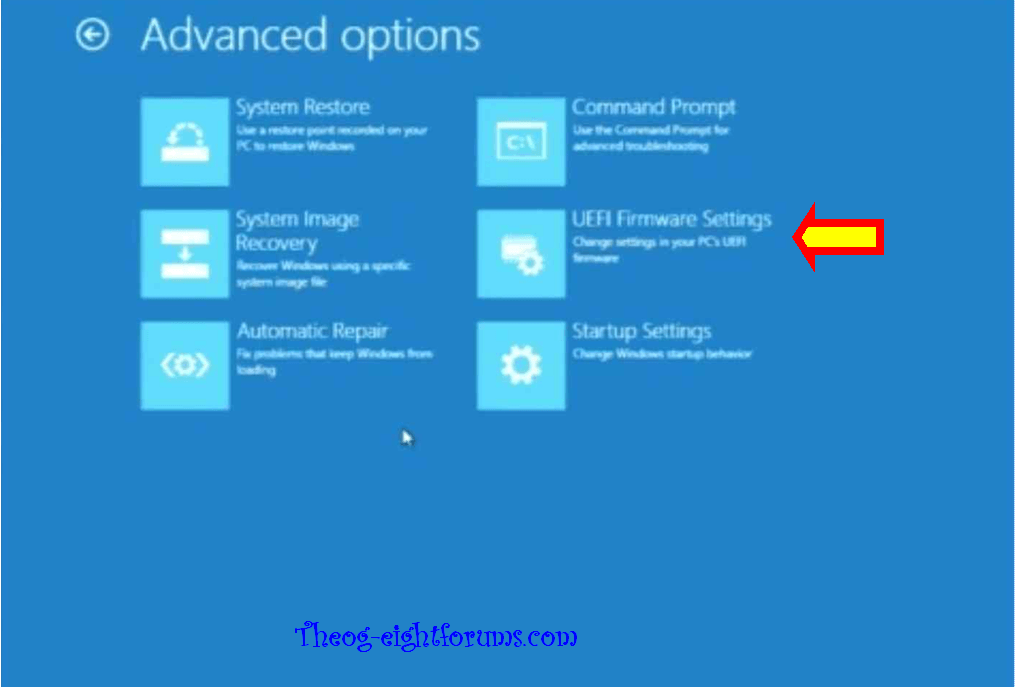 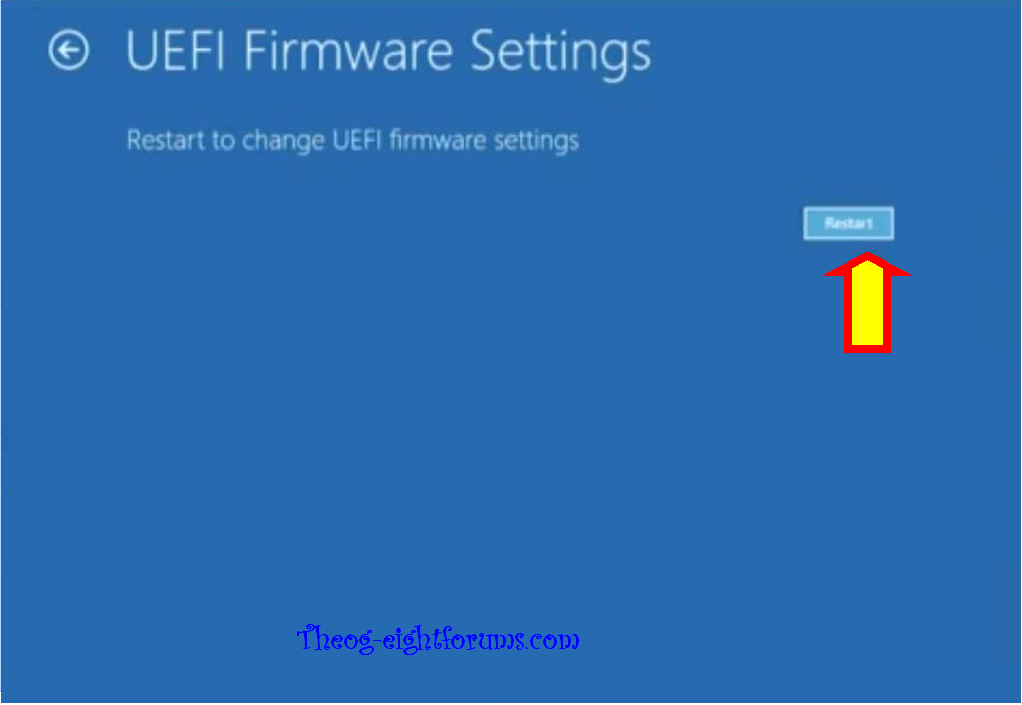 Note
How to reset your UEFI Bios Firmware from Windows 8 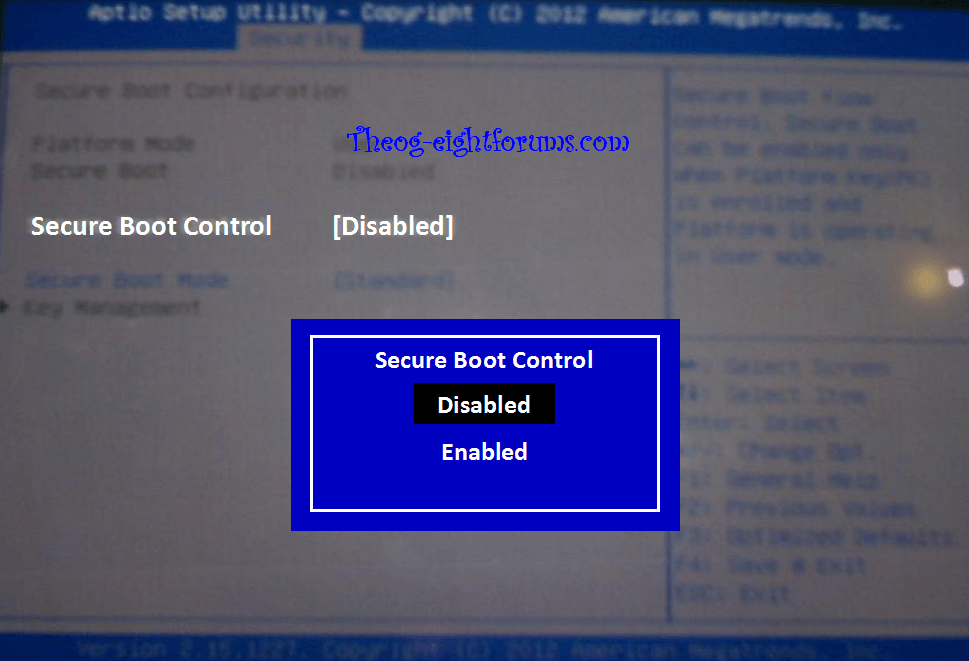 NOTE: Example above, uEFI-BIOS is from a Fujitsu P400. 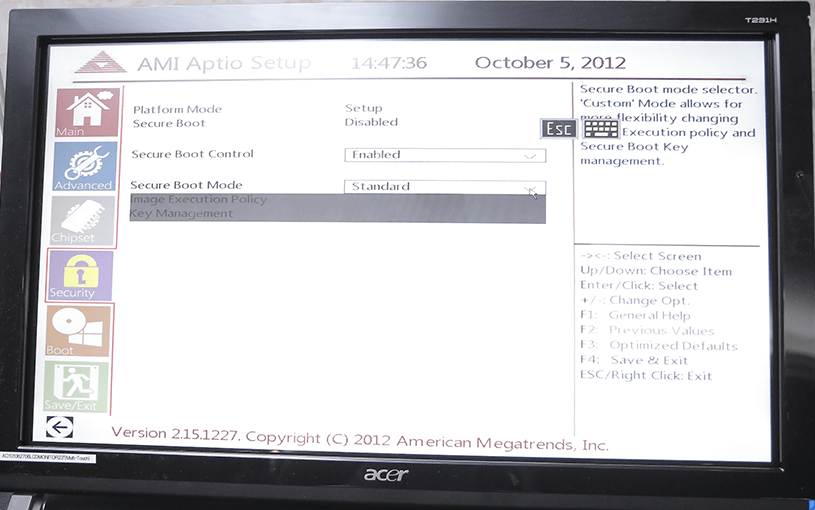 4) Boot from your UEFI 64-bit Windows 7 DVD or USB using the one time boot menu.

Note
If you do not have a UEFI 64-bit Windows 7 DVD or USB, then you can create a UEFI USB using the tutorial below. 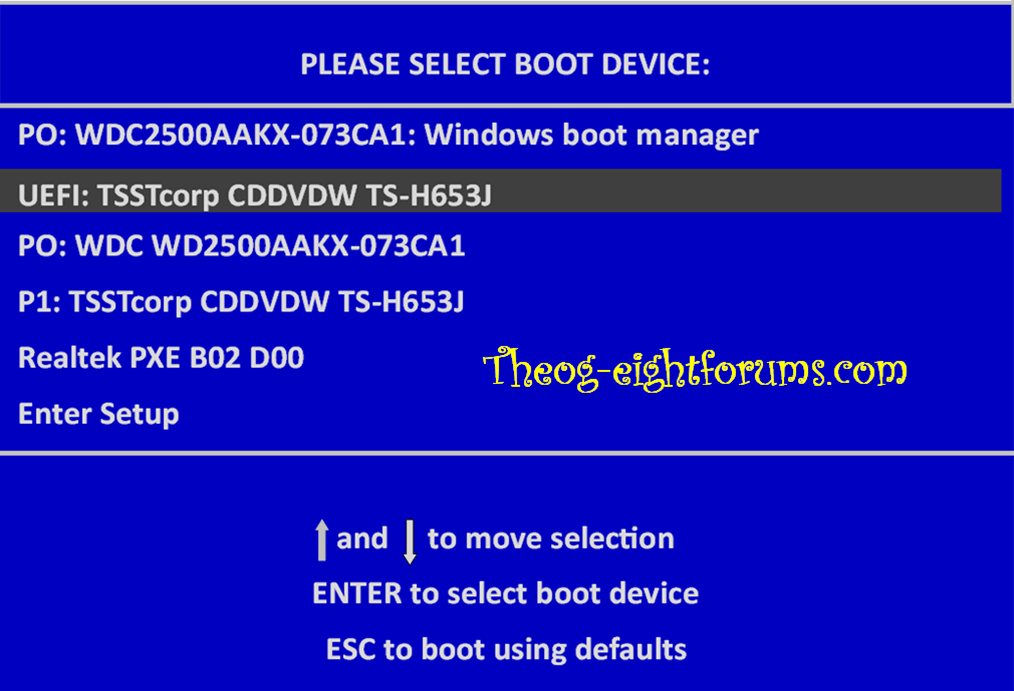 A) Delete all partitions. (in Drive Options) 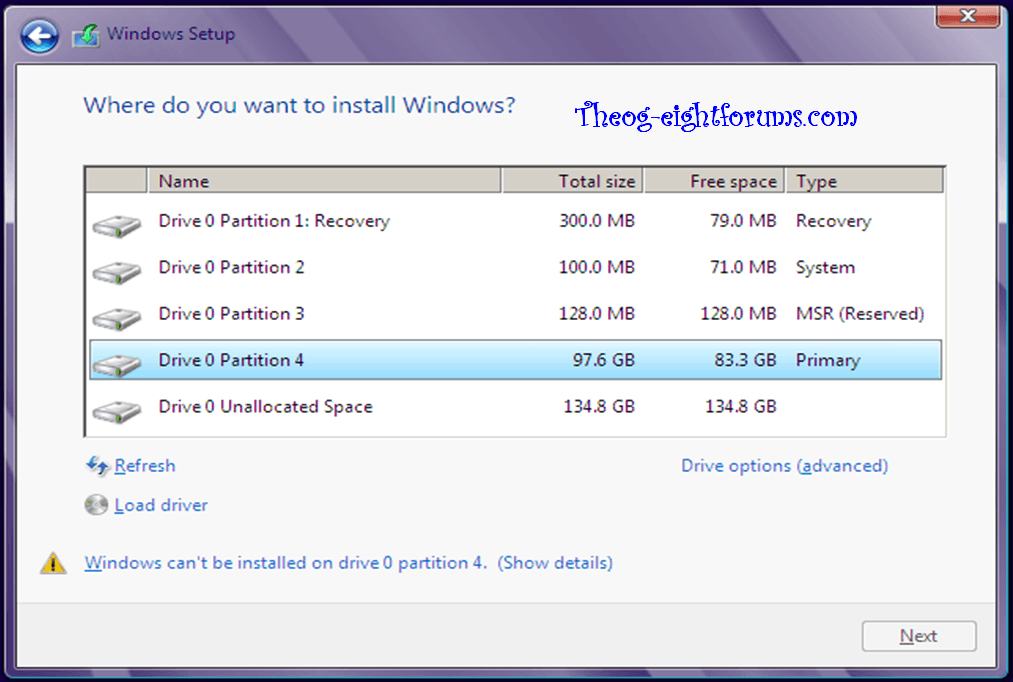 B) Remake partitions. (in Drive Options)


How to Clean the HD Drive, using Step one in this tutorial:
SSD / HDD : Optimize for Windows Reinstallation - Windows 7 Forums

& than Reboot PC to install. 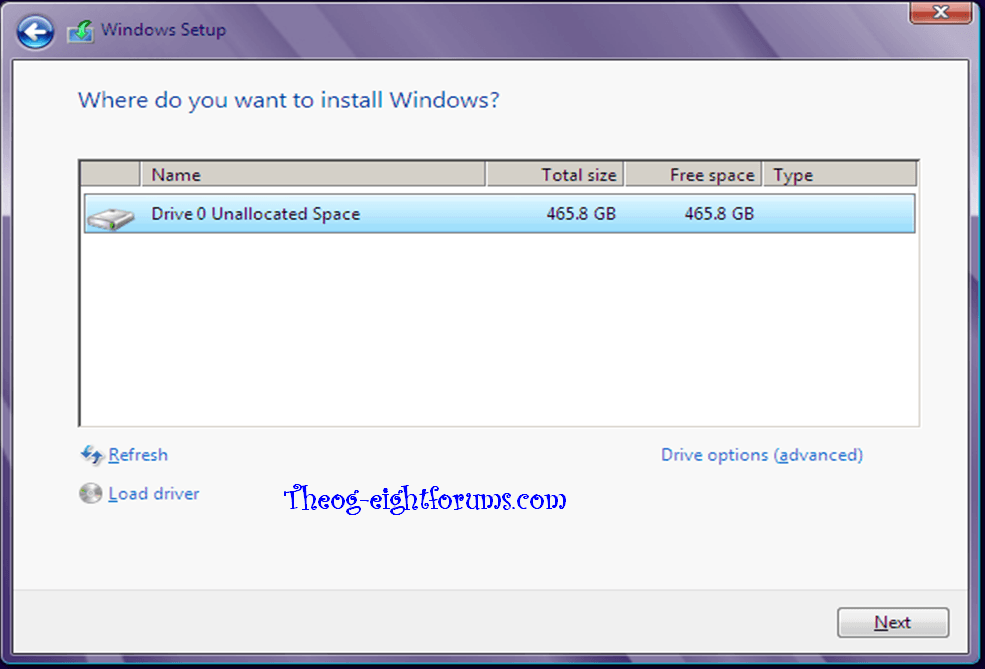 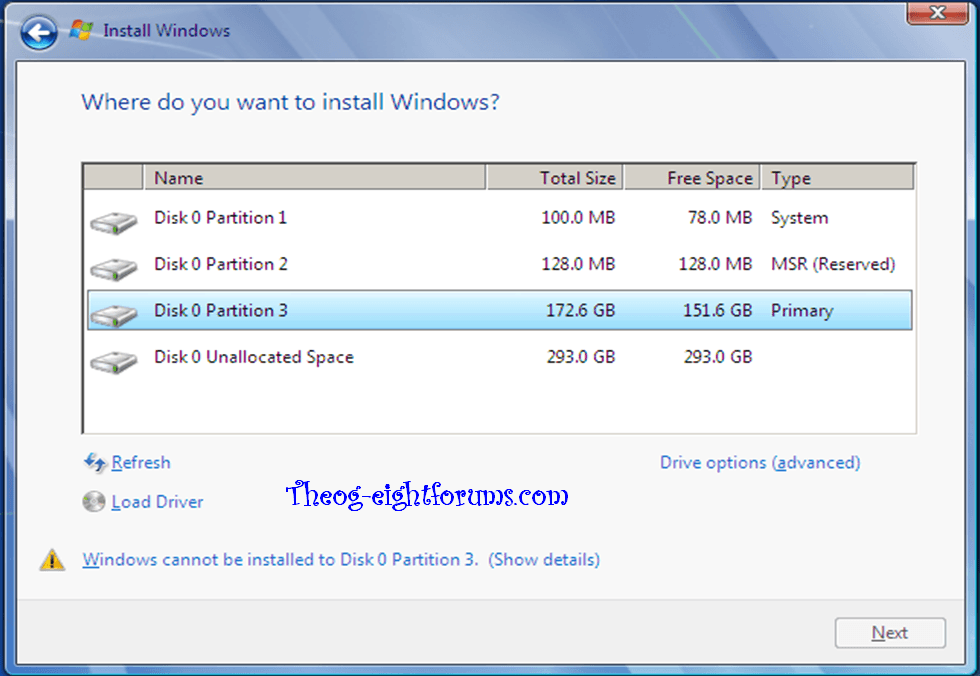 DO NOT ENABLE SECURE BOOT AFTER INSTALLING WINDOWS 7, WINDOWS 7 WILL NOT BOOT.​

Follow Step one to five in this tutorial:
Downgrade Windows 8 to Windows 7

Warning
If you shrink a partition before deleting the OEM Recovery partition, the partition & the new partition may be converted to Dynamic partitions.

Than follow this tutorial: (installing in uEFI mode.)
Dual Boot Installation - Windows 8 and Windows 7 or Vista

Member
When I type:

Looks like you have an older version of PowerShell that doesn't support that command.

OPTION ONE in the tutorial below may also be able to help confirm if you have secure boot enabled or not.

Member
Thanks for your response.

I must apologize. I had your tutorial open on my company laptop (Win 7), while experimenting on my personal Win 8 laptop.

The "EUFI unrecognized" message must have come from the Win 7 laptop. I can reproduce that message.

I've now advanced to the stage where I have a choice:

Which option should I select here? I have a Dell Inspiron 17R 5720

I don't want to muddy the waters, but I might later be tempted to install a small Ubuntu partition at the end of the disk to manage disk images. Based on your tutorial, I made a disk image of my Win 8 machine in preparation for the downgrade. It took about an hour. The same volume of data on an old single-cpu Dell XP laptop used to take a lot less time using Linux tools (and I'm not a techie).

At this stage, will that affect the choice for the boot mode? Maybe I need to change back and forward later on?

In that case, you would want to use the "Legacy Boot Mode, Secure Boot Off" option to use BIOS mode instead of UEFI.

Yes, the SSD should show up to select the same as if it was a HDD.

Thanks Brink. I have one more question if you dont mind answering. Im currently in the BIOS and it gives me the following options:

Should I enable "Load Legacy Option ROM" or change the Boot List Option from "UEFI" to "Legacy" if secure boot has been turned off? Thanks for your help!

Since your going back to Windows 7, you could just leave it with legacy if you're not installing Windows 7 with UEFI.

I now want to download latest drivers from Dell. They have an application called DellSystemDetect.exe that downloads the recommended drivers, and installs them in the correct sequence.

Unfortunately, at the moment, my Win 7 has no internet connection. The trouble shooting tool said "Windows did not detect a properly installed network adapter". Device Manager shows no adapter.

I can see my external hard drive, so I could download the correct adapter to my company laptop and transfer it to my Win 7 laptop using the HDD.

Can you please tell me which driver(s) I need in order to set up an internet connection on my Win 7 laptop.
.

It should be the LAN network driver from Dell for your computer model number. If you're not sure which one, then post back with the model number of your Dell computer, and I'll be happy to help find it.

It should be the LAN network driver from Dell for your computer model number. If you're not sure which one, then post back with the model number of your Dell computer, and I'll be happy to help find it.
Click to expand...

My model number is Inspiron 17R 5720. There are 11 network drivers on the page I'm looking at:

I would be grateful if you could tell me which driver I need.

You could check in Device Manager to see what the network adapter is to compare it to the list of available drivers to help.

Brink said:
You could check in Device Manager to see what the network adapter is to compare it to the list of available drivers to help.
Click to expand...

As I mentioned earlier, there are no network adapters in Device Manager.

I have an item labelled "Other devices" with 7 contents, all marked with yellow exclamation mark:

Could you please have a look at the 11 Network adapters in the link I posted earlier, and advise which one(s) to download and transfer to my other laptop. I don't mind transferring all of them, but maybe that will cause later problems because I need to install all the other items such as BIOS, Chipset, in correct sequence. Note that there are 33 drivers in total for Win 7 (repeat Win 7, not Win 8).

With the specs below,...


.. I would start with the latest version of these.

Everything now looks fine. Many thanks for all the help and hand-holding

The following comments might sound negative, but they are intended to encourage people who might have some difficulties.

I noticed that I had an internet connection. That was the main objective. Since then, I've been successfully adding one driver at a time (for safety), in the recommended sequence, with a reboot after each addition.

Two other network drivers in the recommended list also failed. But it seemed to me that further additions appeared in Device Manager. The video driver said that my bog-standard adapter was the recommended adapter. (But see later.)

Half-way through the drivers, I thought that I should try to activate my £45 eBay "Genyoowine Widnows 7 Home Preemium".

I saw no option "Change Product Key". On the Windows Validation site, I clicked "Validate Now". Said "Your Windows is genuine".

I then noticed that 169 updates were installing themselves without my permission - but I let them continue.

So, I never entered any Product Code, but I have genuine Windows 7, with updates. Maybe I should have bought the £1 eBay offer

BTW: I've been installing, re-installing, repair-installing, upgrading, and downgrading Windows since version 3.1. I have never at any time been asked to provide a Product Key.

The next time I downgrade from Win 8 to Win 7, I think I'll just press the button and leave it to do everything itself, without my interfering.

The fly on the wall

Thanks for the information. Worked Great!

Oh dear I wished I had known about this tutorial when I bought my new laptop with 8 on it as the resulting time consuming, irritating problems including the activation and verification issues I had with the seller to install 7 instead could have been so avoided

Great post! I am having trouble with a PC that came with Win8 where I formatted and installed Win7. The computer has UEFI bios. I got Win7 installed and running, appears that all drivers are installed properly. My problem is the computer runs VERY slow. takes 1-5 minutes to open a browser or program. I have ran virus scans, checked HD for errors, malware scans, all windows updates installed, java updated... I have tried everything I can think of... Any suggestions on where to look for my problem?

Hello sodbrother mate try some of these I find they slash a fair bit of time off the machines boot and performance times.
Optimize Windows 7 - Windows 7 Help Forums