Now today i wanted to look to my 2 external spindle drives if defrag had run and it did run......BUT also on my Samsung SSD's which i never do myself.

So has anyone else has this problem too because i do not find this funny.

My blog's got only one article in English, but it's about this issue

Why Windows 8 defragments your SSD and how you can avoid this
Click to expand...

Member
Never defrag a SSD! They use TRIM instead. Defragging a SSD shortens its life due to all the writes that occur when defragging.

No worries, the included "Optimize Drives" feature in Windows 8/8.1 will automatically defrag HDDs and TRIM SSDs as needed on a schedule, or when you manually run it.

mwhals said:
Never defrag a SSD! They use TRIM instead. Defragging a SSD shortens its life due to all the writes that occur when defragging.
Click to expand...

He's aware of that.

His complaint was that windows 8 had defragged his SSD automatically.

mwhals said:
Never defrag a SSD! They use TRIM instead. Defragging a SSD shortens its life due to all the writes that occur when defragging.
Click to expand...

He's aware of that.

His complaint was that windows 8 had defragged his SSD automatically.
Click to expand...

He probably read it wrong thinking that it defragged the HDD and SSD when actually it trimmed the SSD. . .

Hi there
Windows 8 and 8.1 DO NOT defrag SSD's. - Don't even THINK about it. In any case I often wonder if it's ever worth defragging a normal HDD anyway. If you've moved your OS + programs to an SSD your HDD's will contain essentially USER DATA which probably doesn't change hugely anyway. I really think the time spent in defragging a classical spinner isn't worth while.

(Virtual Machine disks are a different argument - but the Virtual machine software will have its own routines for defragging Virtual Disks - you don't need to use the standard windows software for this).

included my prtscrn that made me worry, saying that C:drive and S:drive (together 2 SSD's in Raid0) where optimized on july 20th.

Can well be this is nothing, on the other hand, it is Windows 8.1, so BETA and one never knows if bugs are in or not.....

So i disabled optimization.

i am convinced thtat HHD's need defrag, certainly when the OS is on it. In time computer will slow down, will also slow down when

there is not enough free space. Just a thought. 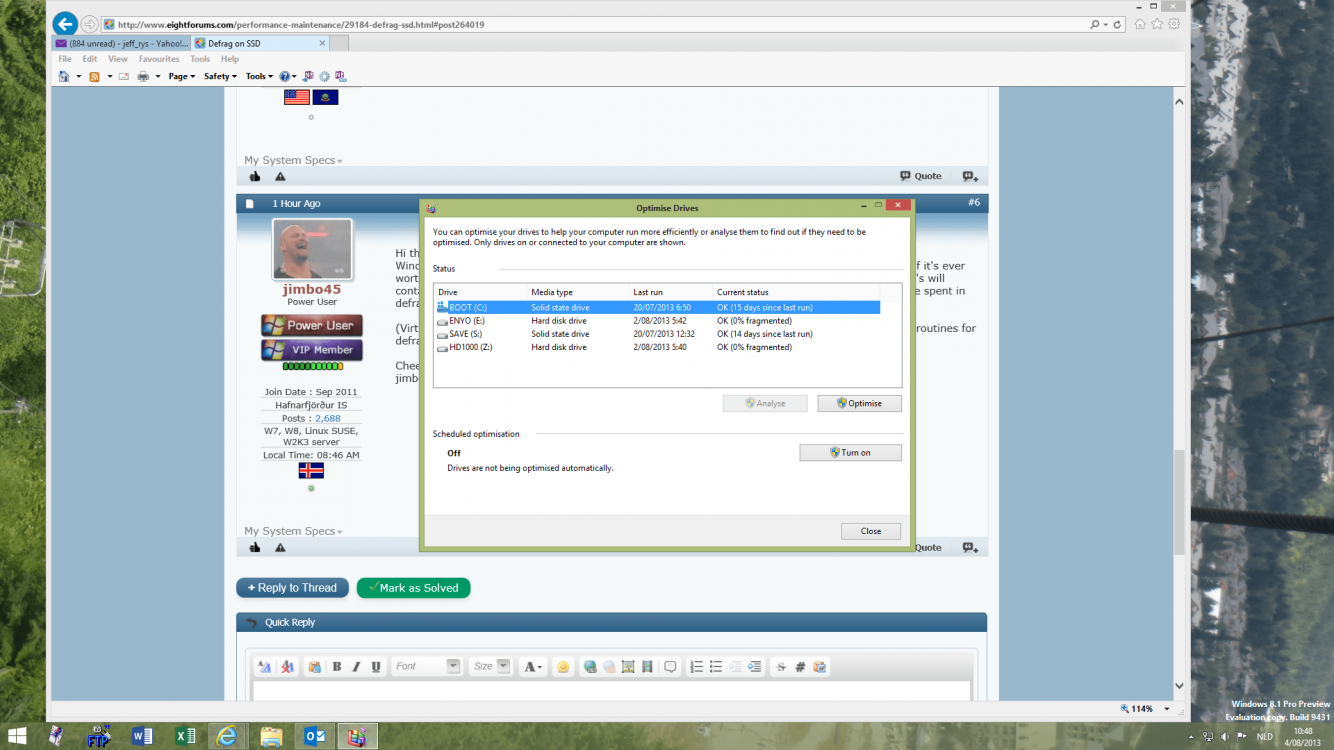 My blog's got only one article in English, but it's about this issue
Why Windows 8 defragments your SSD and how you can avoid this

Windows 8/8.1 does not defrag SSDs. Only HDDs are defragged. Windows 8/8.1 uses TRIM on SSDs instead. TRIM does not harm a SSD at all. In fact, using TRIM on your SSD every so often as needed actually helps improve your SSD's performance and life span just like defragging a HDD does.

Perhaps that issue in the article Vadim linked to above was with old first generation SSDs. If I use either command below, my SSD gets trimmed and not defragged. 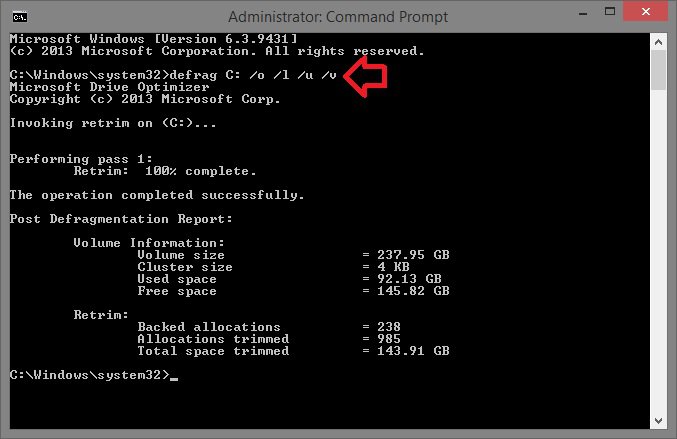 My blog's got only one article in English, but it's about this issue
Why Windows 8 defragments your SSD and how you can avoid this
Click to expand...

Hi Vadim, thanks for this, my dfragsvc is stopped, do you think it still defrags my SSD?

What you're saying is correct... in theory

1. I've researched this issue long enough to be certain that the bug exists and reproduces on all Windows 8 machines with default defrag and maintenance settings.

2. My blog readers provided me with enough data to support this point, and modern SSDs are affected as well. I've got a lot of logs posted by my readers from different machines. Feel free to dig thru them, looking for Windows 8 PCs and finding proof (SSD models are easy to figure out from the logs).

3. Please read my blog post carefully to see how the issue occurs (the commands you've posted are irrelevant to the issue). Then check the logged events on all machines available to you. The OS has to be installed for at least a month for the defrag to occur with reasonable probability and be reflected in the event log. But I assure you it will occur sooner or later

I can see if I can translate my CheckBootSpeed utility to English, so we can get more logs from EF readers. Or I can throw a quick PS script. But 8.1 Preview is too recent, so the logs are not likely to show the issue. But that doesn't mean the issue will not occur.


brummyfan,
The service start type is manual, so it starts only for defrag/optimization.
Last edited: Aug 4, 2013

I have found two instances of defrag on the 26th July ( see the snip), I have excluded my SSD drive from Automatic maintenance but I couldn't find "ScheduledDefrag" in my Task schedule Library.

Power User
brummyfan, the screenshot is inconclusive. Please post the text results of the PS command (copy/paste from the window):

Code:
ScheduledDefrag is in the Task Scheduler: Library - Microsoft - Windows - Defrag. I see it in 8.1.

Thanks, I found the "ScheduledDefrag", text results attached. 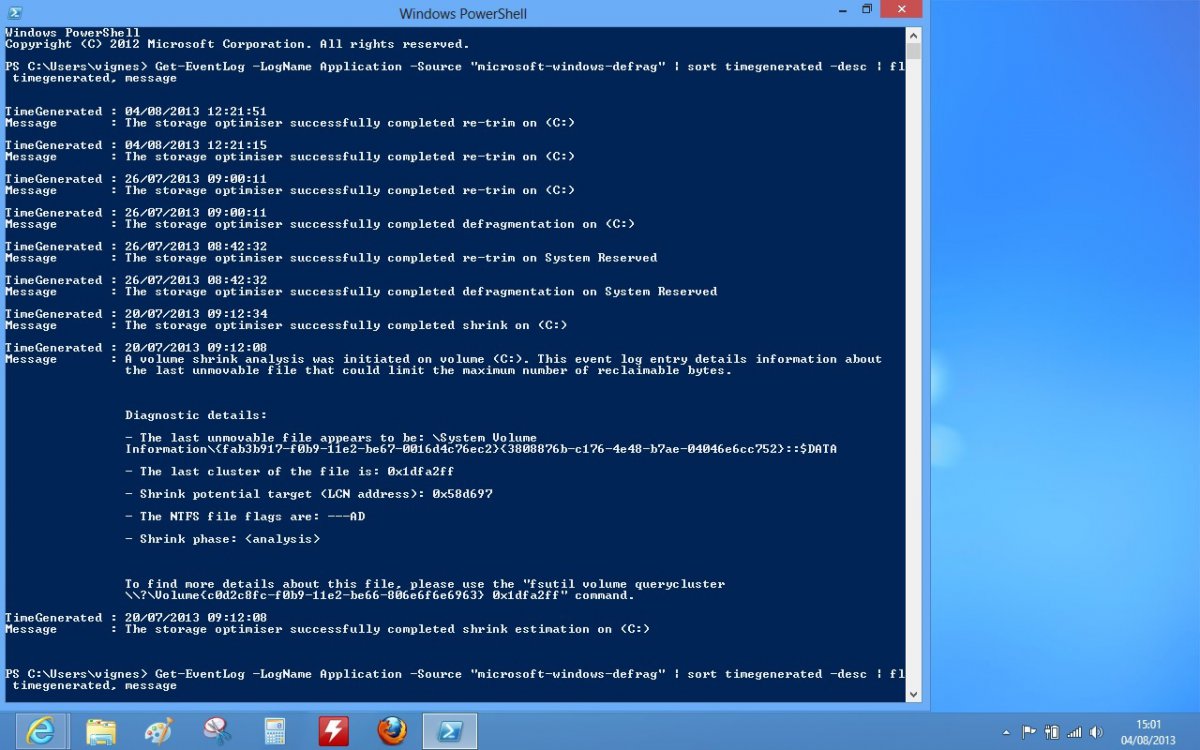 Power User
Thanks for the screenshot. I see that the C drive gets re-trimmed and defragged on 26/07/2013 along with System Reserved. If C is SSD, then there you go.

VIP Member
Pro User
I see that as well... 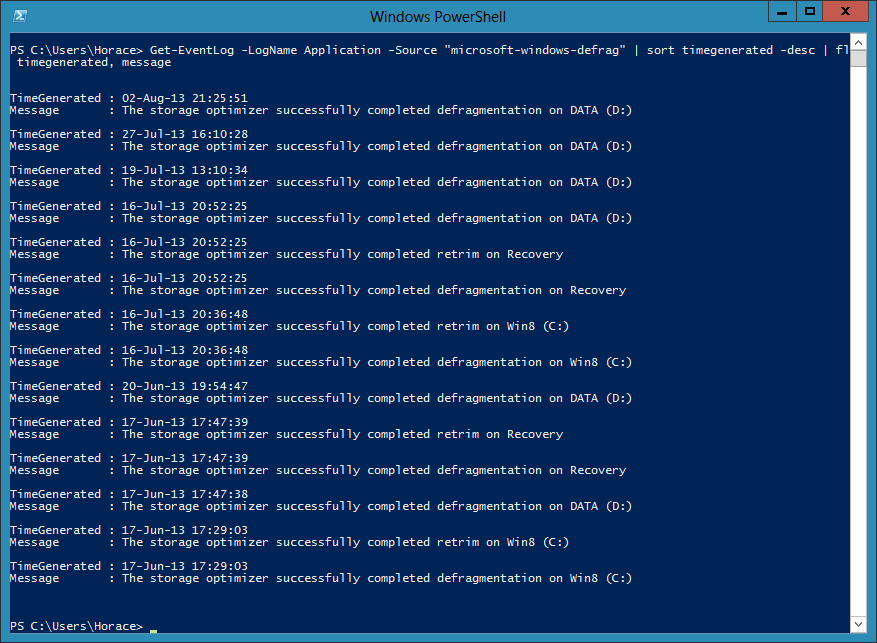 C: and recovery are the SSD here.

There are a few lines that mention a defragmentation.

Do we really have proof it really defragged? Or the bug consists in just displaying the message of a defragmentation after the trim just happened?

Just in case, I've disabled the automatic optimization for C: and recovery until I find out more about this.

VIP Member
Pro User
Well, we can narrow it down at least.

After manually "defragging" C: with a command as described in Shawn's post, the event report shows that C: was successfully trimmed.
There is nothing mentioned about a defragmentation.
All well...

The messages of defragmentation on SSD's seem to be noted after an automatic optimization and not a manual triggered one.

Hi there
Well after using SSD's for around TWO YEARS now - I've never bothered -- and I certainly haven't notice any degradation of SSD performance -- and even if there is it's so minute that I haven't noticed it.

Also is worrying about eventually having to replace an 85 USD device worth many HOURS of your time in what is certainly an issue that you doesn't have a definitive solution -- The firmware in the SSD these days will stop it being damaged in any case so the OS itself might be issuing commands but it doesn't mean that the actual SSD is carrying out the commands in the same way that a Spinner would do. Without taking the SSD apart , mounting it on to an Engineering Test Bench and putting a "Datascope" on it to see what the device is physically doing we can't prove what's happening internally to the device one way or another.

Certainly people haven't been reporting failures of SSD's (OF THE LATEST GENERATION) in any large volumes --and there are enough of them out there now for these to be considered as mainstream devices.

The latest generation of SSD's are more reliable than spinners -- these days the probable MBTF (Mean time before Failure) is likely to be about as long as the projected life of the SUN. !!

Early generations of SSD's are totally another matter - the hardware was not designed as it is now and you cannot extrapolate any results from those early SSD's to the new ones.


Hopachi said:
Do we really have proof it really defragged? Or the bug consists in just displaying the message of a defragmentation after the trim just happened?
Click to expand...

Certainly, these are the first questions that come to any skeptical mind. Well, you can't get inside the drive to see what actually happens But I think that the proof I've established is pretty conclusive:

1. Event log entries. When it says defrag, it means defrag. Especially, since re-trim is recorded separately.

2. Defrag.exe reports. It shows 10% or more defrag before and 0% after. TRIM doesn't cause that.

4. Faulty behavior under maintenance mode only. You can't make defrag.exe or dfrgui.exe defragment SSD. Only the ScheduledDefrag task can when launched during maintenance, whether manual or automatic. This task doesn't run otherwise under normal conditions. You can launch it manually, and it'll cause the issue under the conditions described in my post.

When I was reproducing it for MS Connect, I've enabled Task Scheduled logs and clearly established that the issue occurs during automatic maintenance (in addition to manual task start).

It's hard to believe, but it is defrag The workaround provided works just fine for those who want to be on the safe side. Even if MSFT releases a patch, the workaround still stands.

I don't understand your points. First, you CapsLock-stated that Windows 8 does not defrag SSD. This turns out wrong.

Now you're saying that you haven't noticed any performance impact. Yeah, but I'm not saying that a monthly defrag causes serious problems. It's just unnecessary, and should be avoided.

As promised, check out http://www.eightforums.com/free-developer-programs-projects/29236-checkbootspeed-2-0-en-beta.html. The pack makes it easier to collect all diagnostics info.

Hi there
What I'm saying is that even IF the OS issues a defrag command what does the SSD actually do -- there aren't any "Classical sectors" etc to physically jig around so my point is still that to actually SEE what the SSD does is to open it up and put a datascope on it when Windows issues the command. There's quite a lot of intelligence built into the SSD controller itself so it will just ignore HDD commands that can't be executed because of the physical hardware design. You need to see what the HARDWARE is actually doing here -- All windows can do is issue the I/O and wait for the device to signal it's done it.