So a few weeks back I bought a new computer, this time with win 8, got home and started installing my standard games and programs. To little surprise many had to be worked with for some time in order to work, some in the end unsuccessfully. These are the moments I wish I was a console gamer.

At any rate, one of said games I did not manage to get running on this system was Total war: Medieval 2, one of my absolute favorites in the genre. I was frustrated but after hours of the same I gave up, did'nt even bother uninstalling it. Then a few days back, I see it on my desctop, and having forgotten that it wouldnt start, I wonder, "why have i not played this game in a while?". Click on it, it starts up and runs perfectly, and this lasts for a few days.

I played yesterday, had a blast. Then today, starting the game, the same error message that first so infuriated me appears, and suddenly I remember that yeah, thats why I haven't played it. 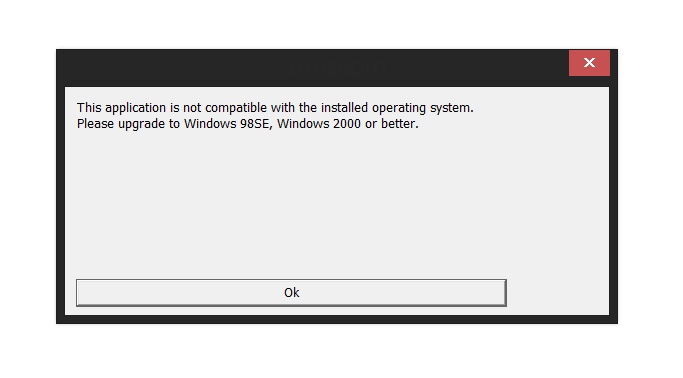 Given the fact that it suddenly became incompatible I'd assume maybe it is related to some update, but there has been no change in my pc from yesterday to today that I'm aware of. Naturally I've tried uninstalling and reinstalling, and running in all different compatibility modes, but to no avail. It is a mystery to me, hopefully someone here has some idea of what could be causing this. Thanks in advance!

tried run as adminidtrator & searched for any patches for this game ?

copied from a solution provided in microsoft community >>

This is a long shot, but if all else fails you can try playing the game in a virtual machine via either VMware or VirtualBox. I've had to do this with Shogun: Total War and Medieval: Total War and it works fine. If you check the official TW forums you will find untold #s of posts by people having trouble playing these games on modern hardware, and I suspect that today's highly advanced processors/video cards/RAM/hardware may be the source of the issues for most people. These games were made to run optimally on older versions of Windows.

So with that said, install VMware or VirtualBox, then install a copy of whatever OS the game was designed for, which will most likely be either WinXP 32 bit or Win98/95. Also make sure you've enabled something along the lines of 3D acceleration in the VM. Once you've done that boot into the OS, install your game and whatever version of DirectX the game uses. Then open DXDiag (Google it) and enable both DirectDraw Acceleration and Direct3D Acceleration (if possible). Make sure the game has all applicable patches, etc., then try to run it. With any luck and a little config it should hopefully work. And if you run the VM in windowed mode you will even be able to easily switch between the host OS (8) and the VM at will. You can also run the VM and the game in fullscreen and switching back to 8 will still work.