When it happened the last time all I could do was switching to safe-mode and disabling the Intel HD 3000 altogether.

Installing the latest GeForce-driver has no effect whatsoever. All the time the notebook's display is running at a 1024x768 resolution (native resolution is 1366x768).

Do you have any ideas what else I can do besides going back to Windows 7?

Welcome to the forum!

Bit unusual computer you have there. Could look at BIOS settings and see if there are graphics settings that you can change. Look for something like dynamic or discrete.

Yeah, this notebook is a shithole. Luckily not mine but I still want to help out my friend.
I just installed the GPU vendor drivers for both the GeForce and Intel HD 3000 from their website but it didn't help.

In BIOS there's no such setting.
There's a BIOS update available but it says my computer is not suitable for it (d'oh).

I don't speak German. Do they have phone support?

Member
i have an intel 3000 with an nvidia gt 540 on an asus, all is ok. Try this one and latest from nvidia 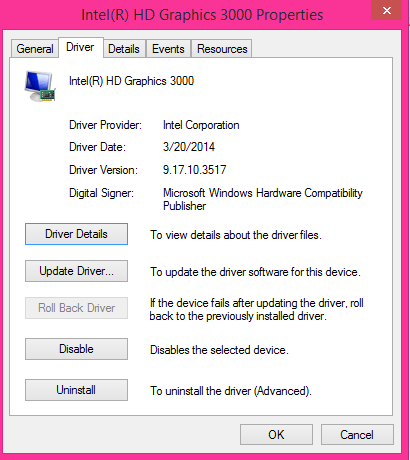