Information
This tutorial will help show you how to use or setup Windows Backup to back up files with the option to include a system image, and to have an automatic scheduled backup or not in Windows 8.

You must be signed in as an administrator to be able to create or setup a Windows Backup.

Note
New backups are saved in this format:

To help maximize your disk space, Windows Backup will only do a new full backup of all files in your selected folders the first time it runs, and then only does an incremental backup of files that are new or have been changed since the last scheduled backup was made.

Each new full differential backup is created in a set known as a backup period labeled with date ranges as the Backup Set YYYY-MM-DD HHMMSS folder(s) in the computer name (ex: BRINK-PC) folder. This is when you setup a backup for the first time (step 3 below), or create a new full backup.

Windows Backup logs are stored in the .evtx file below. It will open in Event Viewer when double clicked/tapped on.

Note
In Windows 8.1 and Windows RT 8.1, the Windows 7 File Recovery (aka: Windows Backup) feature in this tutorial is no longer available.

If you like, you could use File History instead of Windows Backup, and a custom refresh image instead of System Image. You could also use a 3rd party program like Macrium Reflect or AOMEI Backupper instead.

​
A) Under Backup, click/tap on the Set up backup button, click/tap on Yes if prompted by UAC, and go to step 6 below. (see screenshot below)​
​

​
4. To Make Changes to Existing Windows Backup Setup
NOTE: This step is if you would like to make changes to where to save the backup, what folders you want to be included in the backup, and/or to the backup schedule.

​
A) Under Backup, click/tap on the Change settings link, click/tap on Yes if prompted by UAC, and go to step 6 below. (see screenshot below)​
​ 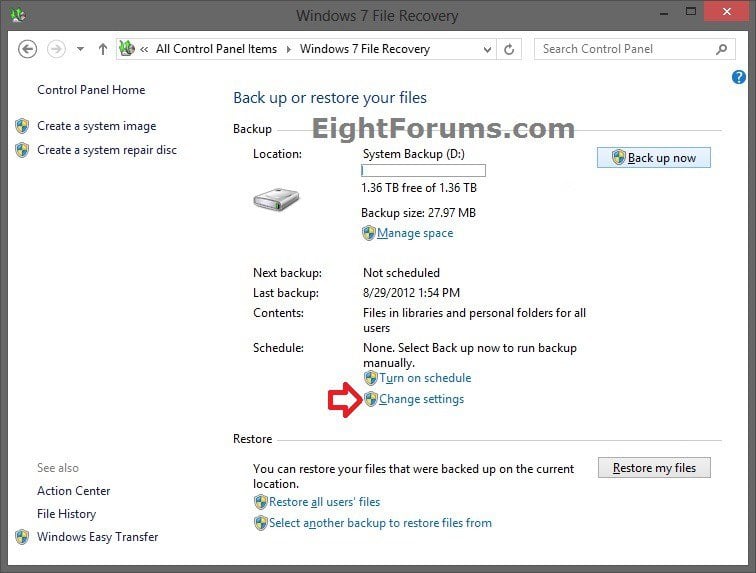 ​
A) Under Backup, click/tap on the Back up now button, click/tap on Yes if prompted by UAC, and go to step 15 below. (see screenshot below)​
​ 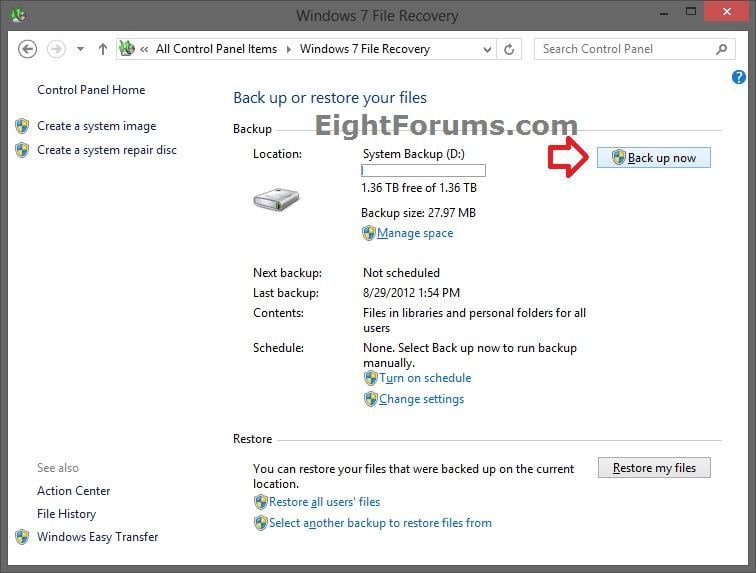 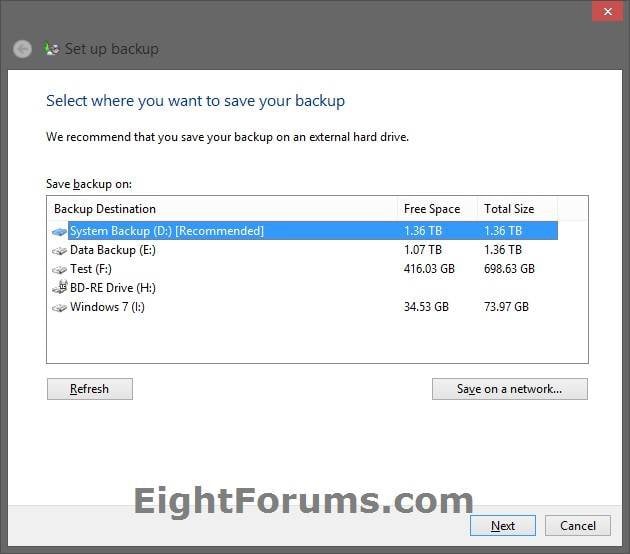 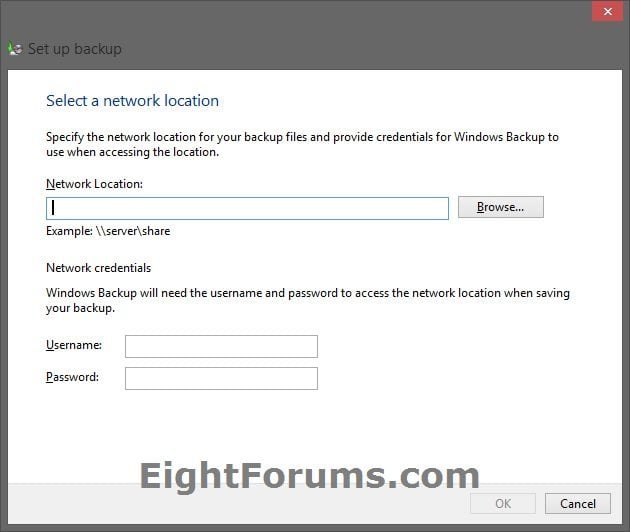 ​
7. Select (dot) what you want to backup. (see screenshot below) 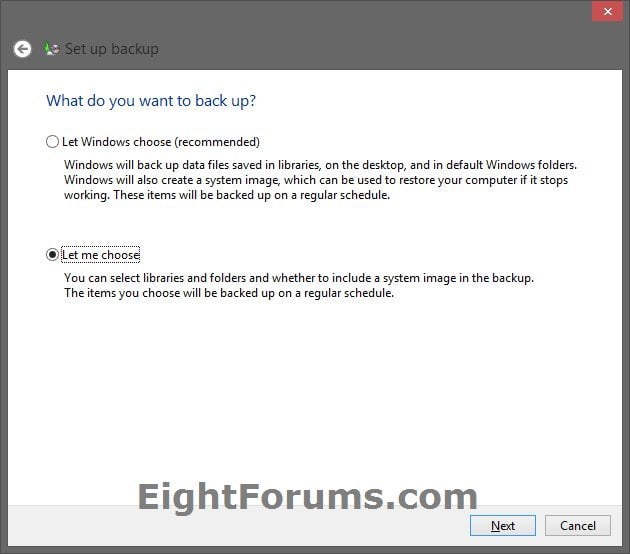 ​
8. Select (check) the folders that you want to be included in this backup. (see screenshot below) 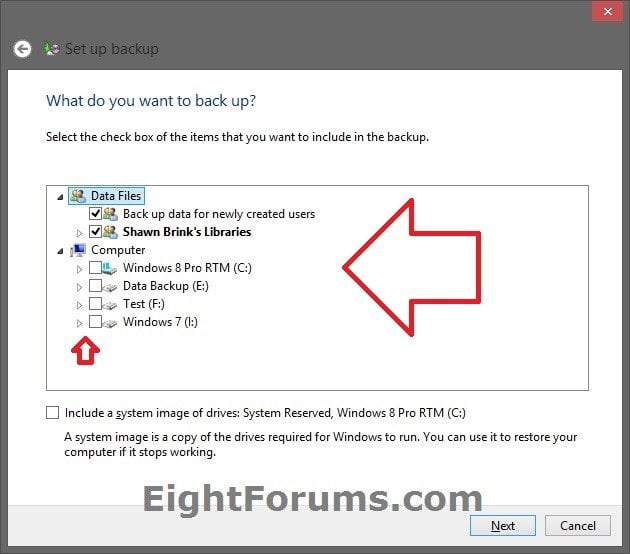 ​
9. Check or uncheck the Include a System Image of Drives...... box for if you wish to also include creating a separate system image or not while creating this backup, then click/tap on Next. (see screenshot below)

You do not have to have System Protection turned on for the drive letter, but do need to adjust the maximum space to what you like.

The size of a system image can be quite large since it will include all system drives in the image by default plus any drives you have included. If you want to keep multiple system images, be sure to increase the max size accordingly. 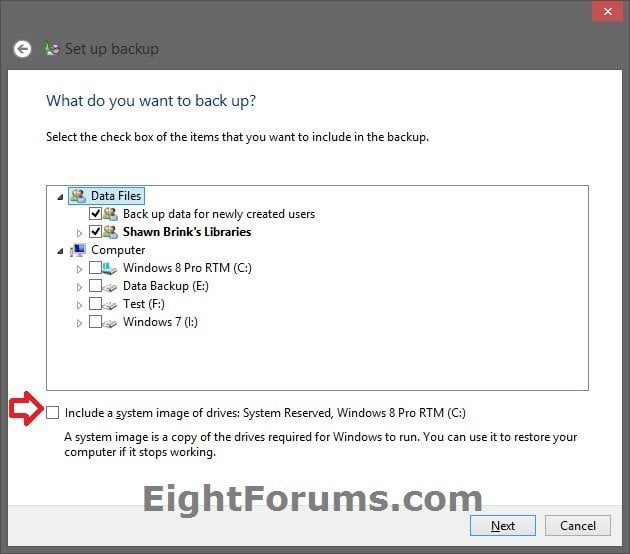 ​
10. Click/tap on the Change schedule link. (see screenshot below) 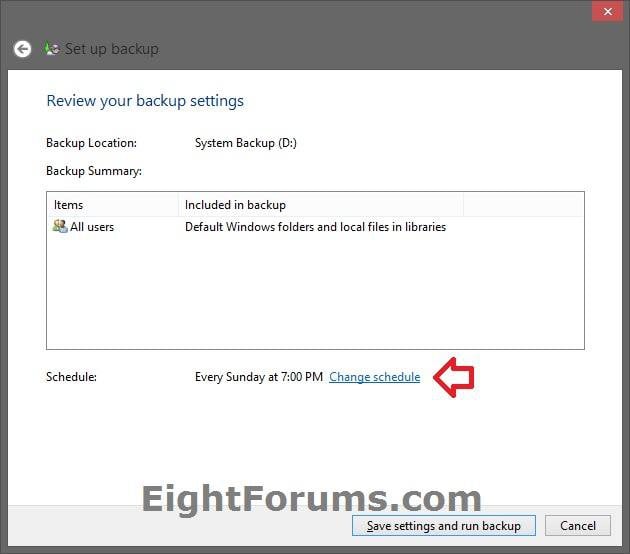 ​
11. Set the backup schedule to how often you want, then click/tap on OK. (see screenshot below)
NOTE: You can choose to turn on File History to back up your libraries, contacts, favorites, and desktop, but you can't use both features (File History and backup schedule) at the same time. 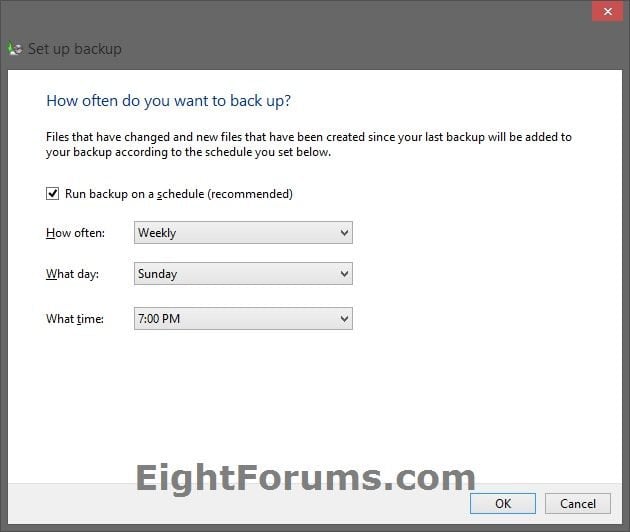 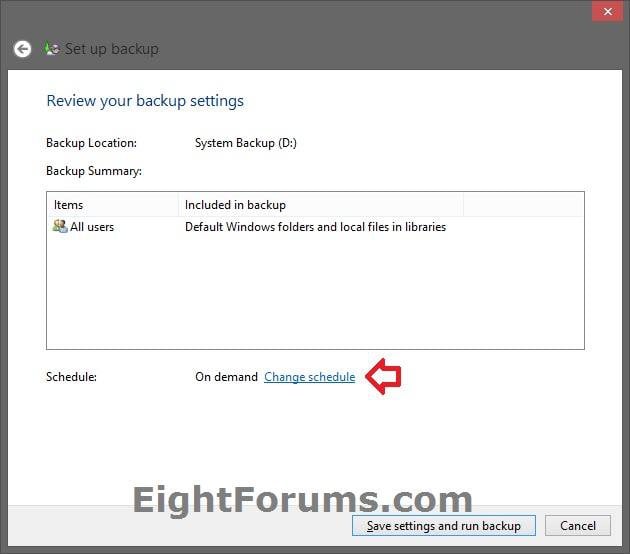 14. If you used step 4 above to Change settings and used a different backup location, then continue on to step 15 below.

15. Windows Backup will now create the backup showing you it's progress. (see screenshot below)
NOTE: If you would like to see more details of the backup in progress, then click/tap on the View Details button, and click/tap on Yes (UAC). 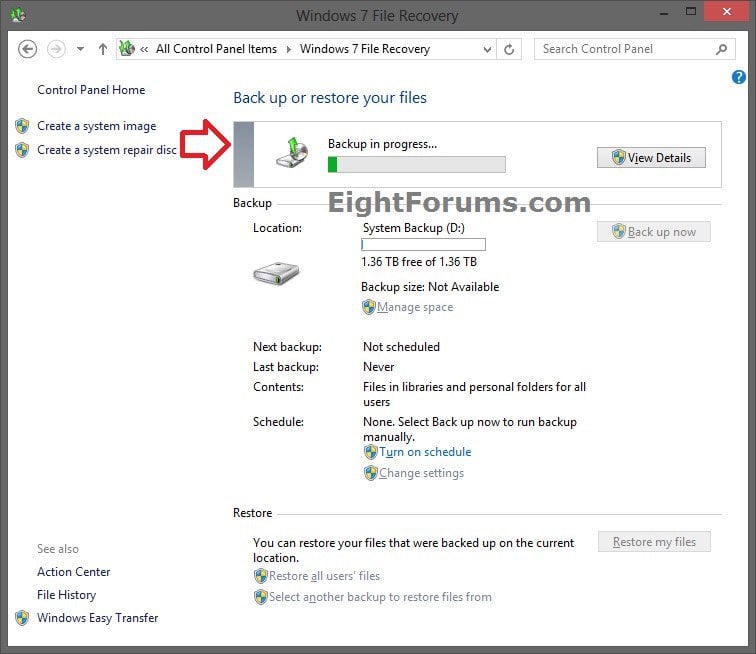 16. When finished, you can close Windows 7 File Recovery if you like. (see screenshot below step 4 or 5)

This does not seem to apply to "Windows 8 Release Preview".
Any way to make a System Image now ?

It's the same in Windows 8 RP as in the RTM for this. You should have an option to include a system image at step 9 in your backup.

If you wanted, you could also use the tutorial below to create only a system image.

In other words if a scheduled (starts running) or planned backup is running ....should I stop using the computer?

So...I use the custom option and skip/exclude option

You can safely ignore this error message.

However, you can also use one of the following methods to eliminate this error message during future backup operations:

Thanks...this website is the oasis for new Win 8 end-user

I noticed the thumbs up for your rep...I hope others use it too

You cold turn off the backup schedule if that's what you meant.
http://www.eightforums.com/tutorials/16089-backup-schedule-turn-off-windows-8-a.html​
.... or reset Windows Backup to default.
Backup User and System Files - Reset to Default Configuration - Windows 7 Forums​
Hope this helps,
Shawn

That's what I wanted. Thank you !

I am kinda confused. This doesn't work for Windows 8.1? If not, then what is my best route to do a backup on a 8.1 OS? I am trying to attempt to backup all my data and then install 8.1 Pro instead of just the standard 8.1. Any info is always appreciated!

Depending on what type of data it is, you could do a manual copy and paste to backup and restore it.

Otherwise, you use a 3rd party backup program like Macrium Reflect, Acronis, etc...