Automatic restore points is not working in system restore

Automatic Restore Points is not working in System Restore. Task Scheduler is empty during last 30 days.

Double check to make sure that System Protection is turned on for your Windows drive.

Next, use the free program CCleaner to see what it shows for what restore points you may have like below. 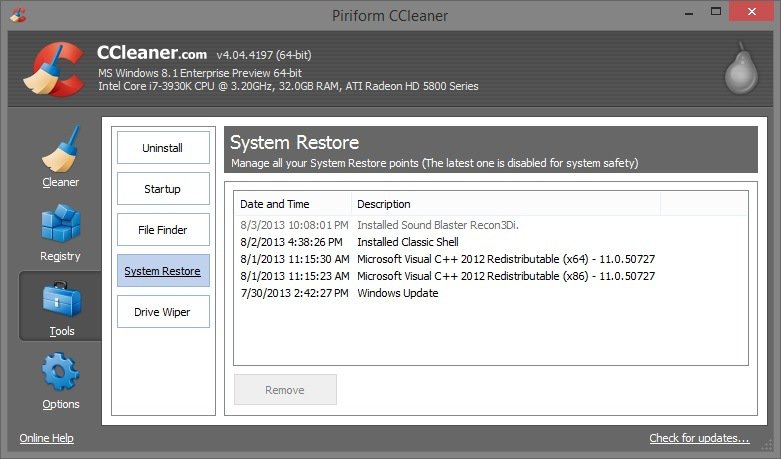 Hope this helps for now,
Shawn

In System Restore there is only one restore point created manually. Nothing for Automatic Restore Points.

Normally System Protection creates a scheduled restore point only if no other restore points have been created in the last 7days, and before significant system events such as a program, Windows Update, or driver installation.

Is your PC turned on long enough for a restore point to be automatically created. If it's turn off most of the time or not turn on for very long when running, then it may not have had a chance to create one.

Double check to make sure that the SR task (middle pane) for SystemRestore (left pane) in Task Scheduler has not been disabled.

In addition, check to make sure that Automatic Maintenance is turned on.

Thank you for your information.

Please check the link listed below and advise.

They work in Windows 8 as well.

Power User
It looks like the thread is going in the workaround direction without attempts to troubleshoot...

Absence of automatic system restore (SR) points may be caused by either of the following:

So it's worth looking into these settings.

1. http://www.eightforums.com/tutorials/3047-sfc-scannow-command-run-windows-8-a.html. If some files can't be restored, copy C:\Windows\Logs\CBS\CBS.log to the desktop, zip it up and attach.

3. Attach diag.txt from the desktop.

I already had ran sfc /scannow twice and no errors found.

As Vadim pointed out, what I recommended was a workaround for you to be able to have restore points created when you like.

To actually fix this, you may need to refresh or reset Windows 8 if you do not have a restore point dated before this wasn't working that you could use.

Personally, I would recommend to use the workaround for now to avoid a refresh or reset until you have time to do them.

Since that day I have had:

5 Resettings with the help by telephone from HP technicians, due several problems in operating the Notebook.

Installation of the OS by HP technician (free House call), using the CDs provided Free of charge by HP, as I could not get the R
recovery disks the regular way.

Sent the HP Notebook to HP facilities in La Vergne, Tenn., THREE (3) WEEKS AGO, to change the "connectivity card" as I was having continue problems with Internet.
Also, they reinstalled the OS, ONE MORE TIME, as I was having problems using the System Restore (Restoration UNSUCCESSFULLY....).

Then, After I received the "repaired Notebook" from La Vergne on July 24th, 2013, I started having problems with the screen: when I started up the screen was blinking ALL THE TIME every 3 seconds, for 2 days. I contacted the HP Case Manager and I was told to send the Notebook to La Vargne "for repair". During these 2 days I kept trying to get the screen to normal using functions keys F9 and F10 keys individual and together until I could enter the country until it started working again.

So, as you can see it does not pay to do another reinstall or reset .

I'd say that if it's still under warranty, then I'd be asking for a new replacement. There's some defect with that one.

I already had ran sfc /scannow twice and no errors found.
Click to expand...

Good for you, but it's not clear why you ignored the rest of my instructions. It's up to you, though, whether to use the workaround or just refresh/reinstall the OS or even send it back to HP, given other problems of which you informed us suddenly in a form of reminder