Anybody else tired of hearing these lame Win 8 complaints?

Virtually everyday I run across a post in a forum or a news article that complains about Win 8 and how the user does not want a phone/tablet OS on their desktop/laptop. IMO, this complaint is totally without merit.

I don't understand why those people can't accept that it is a DUAL PURPOSE OS, for those that want to use the features that are phone/tablet like they are there to be used or for those that prefer the desktop, it's available too. It's very similar to having a dual boot setup except that you don't need to reboot in order to switch between the two interfaces.

Instead of whining about it, accept that the two interfaces are there and deal with it. I use my Win 8 laptop everyday using the desktop and have not encountered any issues with that, Win 8 is like a very capable OS. I can switch back and forth between my desktop with Win 7 and my laptop with Win 8 and run the same suite of apps on both. For those that absolutely need the Start button, there are 3rd party apps that can be applied to bring it back.

Then there are those that whine that Win 8 is unusable on a non-touch screen. Baloney! I have been using Win 8 since the first customer preview on various machines, none of which have a touch screen and it is perfectly usable with a mouse/keyboard (yes, even the Start screen). I have never owned a computer with a touchscreen (and probably never will) but have tried them in stores and find that, instead of making things easier, the touchscreen makes using the OS laborious due to having to constantly lift my arm and make gross arm movements instead of making small hand movements to accomplish the same thing with a mouse.

My only real complaint with Win 8 is the "Metro" or "Modern" apps. I personally haven't found one of these apps that I would want to use on a daily basis so, instead of whining about it, I simply don't use any of them.

I use it as little as possible!

With Oblytile version .9 and Paint Shop.
Open your favorite Paint program to create an image 200 x 200 or so... (minimum - it could be larger)

Add tile color to the background with your paint program or create an image that has whatever background color... Add text to the 200 x 200 square. Save to your preferred folder.

Open Oblytile, (learn the features of Oblytile), choose file, folder, or website.
Add the created tile from Paint (Shop Pro) or whatever as an Oblytile tile image.

I noticed in 8.1 you can name groups of tiles.

XweAponX said:
I noticed in 8.1 you can name groups of tiles.
Click to expand...

I keep hearing this sported as a "new feature." Isn't it the same as zooming out in plain 8 (using the minus (-) key at the bottom right) and right clicking on a group?

The minus key only brings up the app search window.

I'm fairly certain mine just zooms out. Maybe I'm thinking of a different button. All I know is I can name app groups in vanilla 8. 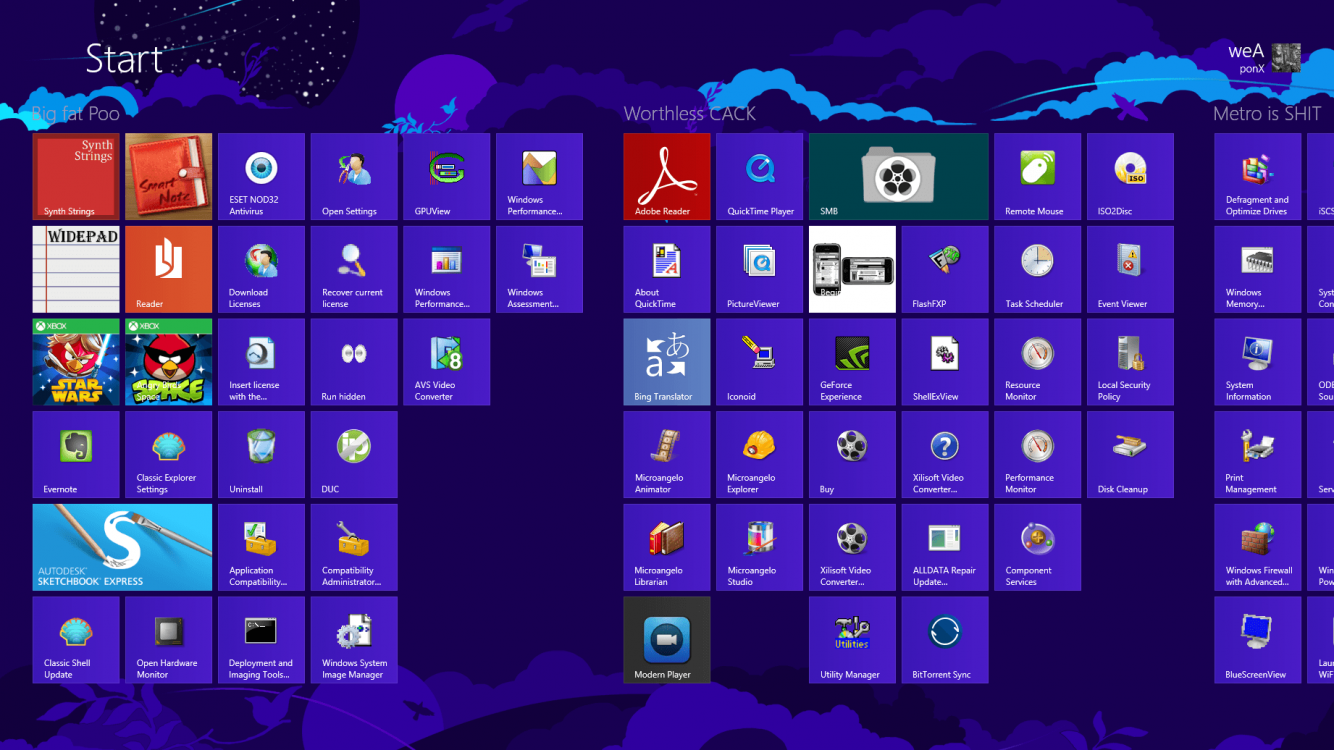 Yea, I'm just confused as to how this was introduced as a "new" feature in Windows 8.1. I suppose that simply making it more accessible in the standard Start Screen view helps.

Hi there
What would be nice would be to have the NAMED GROUPS as a Single tile for each name and then when you click on that it expands DOWNWARDS. You'd still have the facility to type letters for searching applications like now.

I just HATE the screen to be riddled with so many tiles -- that's my BIG beef with W8 --W8.1 does at least boot to desktop directly and with a custom toolbar I rarely need to access the start screen(s) any more.

In 8.1 ya don't have to hit that "-" button, the whole screen goes into an editing mode. I don't care, it still SUX