Album art is not showing up in Windows Explorer Help! plz

it is my hope that someone with experience editing the registry will read this thread and offer some feedback.

I am trying to get embedded album art to show in W.Explorer for m4a Mpeg4 files. I am not talking about the art on the folder but the art in the files itself. Mp3 shows up no problem but m4a is being difficult.

I have browsed many threads on this issue and have not found an easy solution aside from using a shell extension.

The only possible solution I found in another thread and will post it here:

"I fixed the problem as it was mainly due to corrupted registry for some strange reason.i imported the .mp3 dile extension key from registry and opened it using notepad and replaced all .mp3 extension with .m4a and saved it as .m4a.reg and run it and had to do a system restart after that thumbnails again started showing up in windows explorer as normal.such as in the below screenshot"

I don't have a corrupted registry as I just did a fresh install only a week ago. so.
is it possible for me to edit the registery as this person suggests? how would I go about doing so exactly? I have no experience messing with registry files so if someone could offer some guidance it would be a real help.

As far as I understand your question, you want to be able to see the artwork of your m4a music files when browsing with Windows Explorer.

I myself have most of my music in m4a format and I can see all the albumart in Windows Explorer.

The ONLY thing I did was installing K-Lite Codec Pack. I don't use other codec packs, K-Lite worked for me.

Just remember, if you run a x64 Windows you MUST install the x64 codecpack AFTER you install the NORMAL codecpack. If you have other codec packs installed please uninstall them first!

Goodluck trying and hopefully enjoying the albumart in Windows Explorer

I followed your advice. While this was what I was getting before: 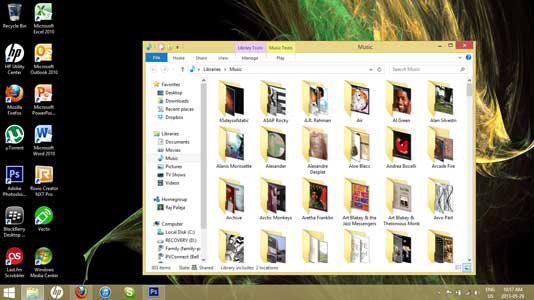 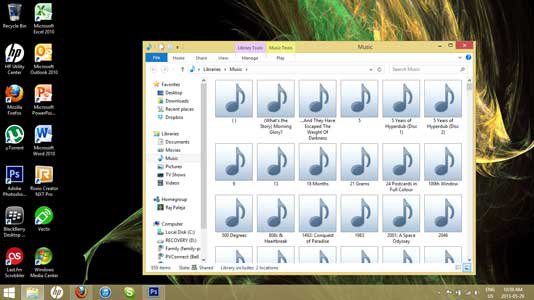 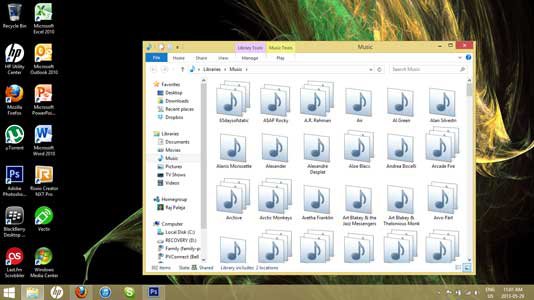 Art appears in folder view but not artist or album view.

After installing K-Lite Codec Pack Basic and x64, it seems that Windows is refreshing my library, one album at a time, but there is still no album art attached to what is coming up and it looks just like before.

I faced the problem myself and figured out the solution myself. I think the problem your is solved by now. If it's not then I'll post with with pictures.:winkey:.

No, the problem has not been solved yet. Since no one had a solution I assumed it was an overlooked bug in Windows 8 so I have resorted to using folder view.

If you have a solution that I have not tried, I would appreciate it if you were able to post it here.

Hello there my friend,

You have set my eyes ablaze, I think I do have the solution.

1. Do you use Mp3Tag to set album arts?
Answer - If Yes the try other programs, just google mp3 (in your case m4a) tag editor.

2. If the problem still persist open the folder where you keep your files

a. Press Alt+Enter after selecting the file, properties tab should open up.
b. Go to details blank out the year section and Refill it.
c. Click OK and Apply. That ought to do it.

If the problem still persists I have a more complex solution to it which you may want to avoid.

I faced the same problem 7 months ago in Windows 7 but couldn't figure it out back then and forgot about it after installing Windows 8.

​
One day after returning home from school found that these two folders were deleted. Got Hindi Songs from Recycle bin and used Recuva (brilliant software) to recover the rest.

Cut to 2 weeks ago,
While searching for a song found that its artists name was changed to Dilip Kumar Roy Thats when I realised someone hacked into my system using some rootkit. Scanned for viruses with MBAM, Kaspersky TDSKiller found none. Thought that I was away from harms way.

Cut to Today,
While I was surfing the net in the morning, my mouse became erratic, screen blanked. I Immediately understood the cause and pulled the network plug out. As I knew hacker was jealous of my music collection so I checked it and found that all the album arts were going out, one by one and I watched it helplessly. I slogged for four hours without blinking my eyes and came up with the complex method that I talked about earlier.

As everyone knows rootkits get entangled with the kernel itself thereby Hackers can corrupt the system, registry etc. In one-word wreak-havoc. So I am formatting my 3 HDD's right now as I'm writing this post. Afterwards do a clean install of the OS.

Thanks for trying to help. I tried MP3 Tag and found that some of my collection has assigned album art and some does not. However none of it appears when I arrange my music library by album. It seems our issues are unrelated.

Pro User
it may be a corrupted registry entry under HKEY_CLASSES_ROOT for m4a.


you could try exporting your M4A registry key from there as a backup , removing it from the registry then letting windows re-create it by clicking on any of your M4A files to see if that works , at the very least you will have the old values in the .reg file incase it doesn't help.

I agree with Wullail, it may be a case of corrupted registry.

Now coming back, first of all our cases are similar. One question - Do you use a pirated copy of Windows and use KMS server or something like that since these remove WAT and in course corrupt registries.

No, the registry hack made no difference, though I did it for MP3s since that was my problem. The files appear exactly the same, without a thumbnail. I guess I'll continue to use folder arrangement. I don't really mind it, I just prefer the artist arrangement. I'm fairly confident now that this was an overlooked bug in Windows 8.

I tried the suggestions in this thread (MP3 album art embedded but not showing in W.Explorer - Windows 7 Help Forums) and nothing worked, either. I thought the .reg file from a working computer would do it. The files did refresh, but when the showed up again, they still did not have artwork.

I can go through my 100GB music collection and add missing artwork with Mp3tag (which is not a very user-friendly program, by the way), but even if I do, it's probably not going to add them back to Windows Explorer. I just tested it on one album: I replaced the artwork that was already there with artwork from Amazon. Then I applied it, discarded the old cover, and refreshed Windows Explorer. Of course it made no difference.

What else can I try?

I played around with Mp3tag (meaning I did nothing significant), opened WMP, refreshed my library a few times, changed the arrangement to artist, to discover that 10 of my 981 albums now had art, so I went to an album without art, clicked properties, changed the default program to Windows Media Player, and watched in amazement as all of my art for all of my albums began to appear. This problem is solved. Thanks for your help!

I like Soham's solution....but my problem is that when I open the Details Tab....the fields are not editable. I click and nothing happens.

Anyone know why Windows is not allowing me to edit these fields?